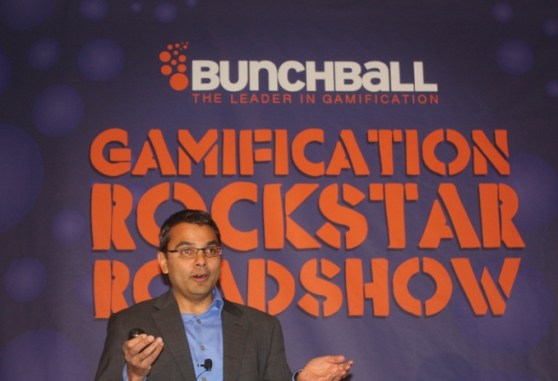 Bunchball rolled out what it called the “rock stars” of gamification on Tuesday at an event in San Francisco. Gamification is a service that Bunchball offers to clients who want to use game-like mechanics to increase interest in non-game applications.

Rajat Paharia (pictured), chief product officer and founder of San Jose, Calif.-based Bunchball, pointed to successes such as Adobe, which used Bunchball’s Nitro platform to gamify Adobe’s photo manipulation software, Photoshop. Adobe created missions that motivated users to learn different features of Photoshop. The result was a big increase in the number of people who completed a tutorial on learning the ins and outs of Photoshop.

While gamification has proven its worth in anecdotal examples, skeptics are plentiful. Market research firm Gartner recently predicted that by 2014, about 80 percent of current gamified apps will fail to meet business objectives because of poor design. 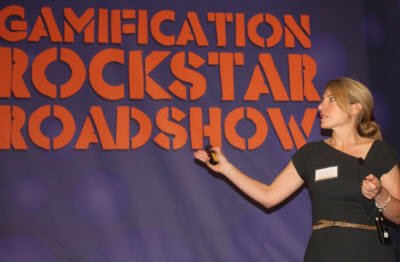 Paharia said, “Nothing could be farther from the truth.” He added that poor design will kill anything. And gamification done right can drive people to change their behavior, he said.

Paharia said he defines gamifcation as the “idea of motivating people through data.” Gamification can help measure and motivate, reward and recognize people, increase loyalty among employees and consumers, and guide and amplify behavior.

She also said that gamification will gain momentum as young folks get older, since 60 percent of people ages 18 to 30 play games. Companies are using it to drive down support costs, incentivize customers, foster employee loyalty, spread messages, accelerate product adoption, and increase the number of brand advocates.

Acknowledging the pitfalls of poor design, Paharia said some projects end in failure. Google News awarded badges for reading stories. It didn’t work out and Google ended the experiment in September (Because we don’t need no stinking badges). Banks also tried offering badges to people who used ATMs.

“It was a really bad idea,” he said. “My prediction is poor design will lead to the failure of anything.”

But Paharia thinks that good “interaction designers” (like the folks at his previous employer, product design firm Ideo) can create lasting gamification services.

“Gamification takes something that already exists, and you layer game mechanics around it to drive loyalty,” he said. 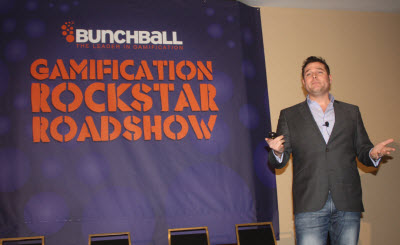 Jesse Redniss (pictured right), senior vice president of digital at NBC Universal’s USA Network, said that his team is trying to get people to get more engaged with TV shows as they play with their tablets while watching TV. Targeting campaigns to “second screen” users, Redniss wants to drive more interest in shows and spread awareness through gamification campaigns.

The Psych campaign, based on a USA Network TV series, encouraged viewers to use Twitter to talk about a killer in the show. Those who came in first place were given the “reward” of being killed by the “hashtag killer” on the TV show. Psych users engaged so much with the campaign that it was trending on Twitter within an hour of launch. The campaign won a Shorty award for the best social media for television. And ratings for the show also improved in its seventh season after the campaign, Redniss said. Higher ratings lead to more ad revenue. People came back three or four times a week to engage with the seven-week campaign. 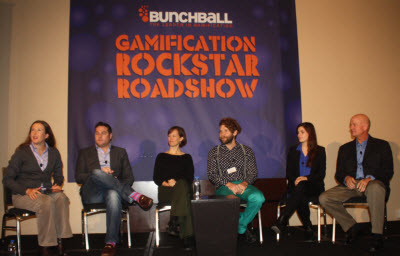 “We started using Bunchball five years ago,” he said. “This was the first time ever that people vied with each other to get killed. We’ve got some proof here that social activity, great storytelling, and multiple platform access is generating real tangible business results for us.”

Here’s some examples of those highlighted at the Bunchball event:

Zamzee creates apps that let kids become more active. Games can motivate kids to do that. The aim is to get them to exercise more and avoid a “ticking time bomb” of bad health, said Lance Henderson (pictured far right), chief executive of Zamzee.

Tracy Trowbridge (pictured third from left), worldwide education programs manager at Adobe, said her task is to get young people to be more creative by taking advantage of more features of Adobe’s software.