Bungie and Activision shocked the gaming world Thursday when the companies announced that they were no longer working together on the Destiny franchise. Activision would no longer publisher the series, including the ongoing Destiny 2.

Bungie is now going it alone, and analysts are chiming in with how this could impact both companies. It’ll have a financial effect on both. But the analysts also explain why this decision happened, and why it made sense for both Activision and Bungie.

Baird Equity Research revised its projections for Activision Blizzard’s revenues in financial year 2019. The group believes that losing Destiny will cause Activision to miss out on $300 million in revenue.

Colin Sebastian, senior research analyst at Baird Equity Research, notes, “… it was not altogether surprising given the declining performance of the franchise, Activision’s history of pulling the plug on underperforming games, and management’s desire to reduce costs. While the stock is understandably trading lower, we think the value of Destiny to Activision is meaningfully less than the 12 percent reduction in market cap, or implied value of roughly $4 billion. To put into further context, the market appears to be valuing the Destiny contract at [greater than 10 times] revenues for a product that is declining and is less profitable than other core franchises.”

In other words, Destiny 2 wasn’t making as much money as Activision wanted. But the perception of the company losing the franchise could be worse than the actual dollars it loses because of the decision to give up Destiny.

“Bottom line, this news clearly adds a new overhang [a sizable block of commodities that can drive stock prices down] on Activision shares,” Sebastian continues. “However, the negative industry view that digital monetization is eroding, and the negative company view regarding a lack of profitable growth is still likely overblown.”

“We had never viewed the Destiny franchise as particularly meaningful,” Macquarie Captial notes. “Primarily due to the margin profile given the external model where Bungie owned the IP and received (reportedly) 20-35 percent of operating profits plus bonuses.”

Morgan Stanley Research has Destiny’s revenues in 2019 even higher, valuing it at $374 million.

“While it is not entirely clear if there will be a payment from Bungie to compensate ATVI for ending the publishing arrangement early, we believe that going forward, Bungie and the Destiny franchise will operate independently,” Morgan Stanley notes. “In addition, we would expect investors to look through any payment as being one-time given Bungie is moving on.” 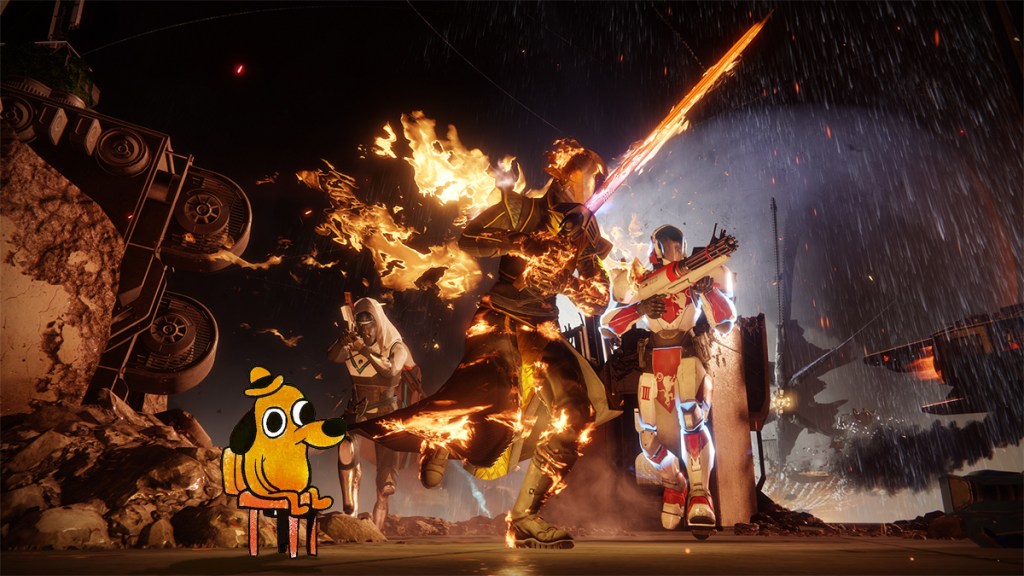 Above: This is fine.

Why Activision would let Destiny 2 go

And then there’s Anthem. EA and BioWare’s online role-playing game is coming out on February 22. It will compete against Destiny 2, and Activision could’ve been concerned about this.

But Macquarie Captial also highlights that losing Destiny means that Activision is down to only one meaningful franchise, Call of Duty, outside of King’s mobile lineup and Blizzard’s games.

Why Bungie would want to go

Michael Pachter of Wedbush Securities believes that development on a potential Destiny 3 may have been a cause of friction between the two companies.

“This is a divorce,” Pachter told GamesBeat. “My guess is that Bungie wanted to take longer than three years to develop Destiny 3, and Activision wanted it out in 2020, so if anything, the divorce makes Destiny 3 less likely for next year. Bungie wants to get it right, and they will take as long as they need to make a great game.”

Pachter also theorizes that if Bungie wanted, they could got to NetEase for help with distributing Destiny. At the moment, Bungie is planning to publish the series itself, but that could be a challenging task for a company that is new to the publishing world. Mat Piscatella, and analyst at The NPD Group, highlights what Bungie faces.

Unrelated take to hot news – Self publishing isn't easy, and the benefits from an established and strong operations, sales and marketing organization towards achieving success are often undervalued. Always good to control one's own fate, but the road ahead has new challenges.

It’ll be interesting to see how Bungie handles the new challenges that come with self-publishing. Although the Activision/Bungie divorce will have an immediate effect on Activision’s bottom line, Bungie is the company taking a bigger risk. If Destiny continues to trend downward — and if Bungie has difficulty adapting to self-publishing — it could be bad new for the studio.

Activision, meanwhile, needs to establish some new IP. Once powerful Activision gaming series like Tony Hawk, Guitar Hero, and Skylanders are all mostly defunct. Right now — outside of Blizzard and King — it really is the company of Call of Duty.