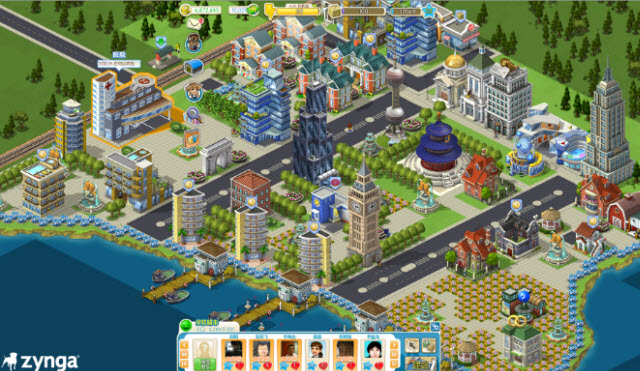 In its biggest diversification beyond Facebook to date, game maker Zynga is announcing today that it has partnered with social network Tencent in China and is launching a version of its CityVille game for the mainland Chinese market for the first time.

The partnership gives Zynga access to Tencent’s Pengyou platform, which together with Tencent’s other platforms has more than 674 million users and is China’s most popular internet service portal. If Zynga succeeds with its new Zynga City game, which is a localized version of Zynga’s most popular game, it will open up a new source of revenues and allow the game maker to diversify beyond Facebook, which accounts for the vast majority of its revenues. This is the kind of expansion Zynga needs in order to convince investors it will be a good investment when it goes public in the near future.

Zynga made the announcement in advance of the China Joy game conference in Shanghai this week. A beta version of the game will be available sometime this week on the Pengyou platform and later on Tencent’s QZone platform. CityVille launched in December of last year and has more than 80 million monthly active users. The game is a free-to-play title on Facebook, where users can play for free and pay real money for virtual goods in micro-transactions. That business model is popular in China and enabled Tencent to build itself into a huge social network with a $50 billion market capitalization.

CityVille was Zynga’s first game to launch in multiple languages. Now the Chinese audience will be able to play it with content inspired by pop culture in China. It will have new decorations and architecture that the Chinese can identify and connect with. In-game events will be linked to Chinese holidays and news, and the game will have a quest system that will allow for a lot of storytelling, which is popular in the Chinese market.

The Zynga City game is being developed by the Zynga China Studio in Beijing. Zynga acquired that studio in May 2010, when the studio was known as XPD Media. The studio has a team of local Chinese game designers, artists and developers. The office is one of Zynga’s largest international offices and the studio is still hiring. Andy Tian is general manager of Zynga China and was a co-founder of XPD Media.

Tencent has opened up its platform to welcome game companies to make games for the Chinese market. Facebook itself can’t operate in China because it is banned by the government. It’s not clear why the game isn’t called CityVille in China; Facebook and Zynga have an agreement whereby Zynga is now allowed to launch games from Facebook on other platforms under the same names.

Overall, Zynga has 263 million monthly active users. The San Francisco company has filed to go public, hoping to raise more than $1 billion at a market value of around $20 billion. Tencent was founded in 1998 and went public in 2004.