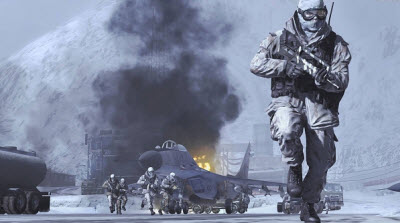 Two co-founders who helped create one of the most successful games in history have sued their former Mother Ship, Activision Blizzard, for firing them.

Jason West and Vince Zampella, co-founders of the Infinity Ward studio that created the billion-dollar hit Modern Warfare 2, filed a breach-of-contract and wrongful termination lawsuit against Activision Publising (a division of Activision Blizzard) in Los Angeles County Superior Court. It’s a sad turn of events in a saga where everybody should have been sharing in the benefits of an enormously successful creative enterprise. And it draws attention to the fundamental tension in the game industry over whether developers or publishers should benefit the most from a successful game.

West and Zampella co-founded Infinity Ward in 2001 with Grant Collier, who left the studio last year. They were acquired by Activision in 2003 and continued to produce Call of Duty games, which are among the most intense combat games ever created and have generated more than $3 billion in sales for Activision. Modern Warfare 2 debuted in November and has sold more than 15 million units to date. The founders allege that Activision terminated their employment weeks before they were to be paid substantial royalty payments as part of their existing contracts for Modern Warfare 2.

“Activision has refused to honor the terms of its agreements and is intentionally flouting the fundamental public policy of this State (California) that employers must pay their employees what they have rightfully earned,” said their attorney Robert Schwartz, in a statement.  “Instead of thanking, lauding, or just plain paying Jason and Vince for giving Activision the most successful entertainment product ever offered to the public, last month Activision hired lawyers to conduct a pretextual ‘investigation’ into unstated and unsubstantiated charges of ‘insubordination’ and ‘breach of fiduciary duty,’ which then became the grounds for their termination on Monday, March 1st.”

“We were shocked by Activision’s decision to terminate our contract,” said West in a statement. “We poured our heart and soul into that company, building not only a world class development studio, but assembling a team we’ve been proud to work with for nearly a decade. We think the work we’ve done speaks for itself.”

Zampella added, “After all we have given to Activision, we shouldn’t have to sue to get paid.”

Talk about an emotional roller coaster: these guys went from having the best game in the world to having no bonus compensation for it. And now someone else will get to make games based on the franchise they created. Bobby Kotick, the chief executive of Activision Blizzard, may have made a big PR mistake here. What talented developer, after seeing this spat with Infinity Ward, will want to make games for Activision Blizzard?

The company hasn’t yet responded to a request for comment.

We’ll be touching on the general topic of Building a Blockbuster Franchise at our GamesBeat@GDC conference in San Francisco on March 10, next Wednesday, at the Game Developers Conference.