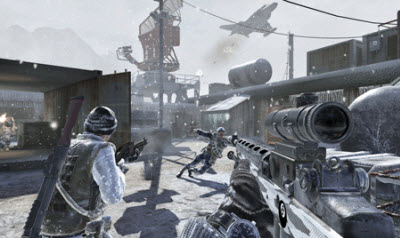 And there was much rejoicing. Video game sales rose a healthy 8 percent for the month of November compared to a year ago, according to market researcher NPD. The sales were up mostly thanks to strong sales of Call of Duty Black Ops and the debut of Microsoft’s Kinect motion-control system.

That’s good news for the console video game industry, since many have wondered if core game industry sales would recover given the threats of the ongoing recession and lots of competition from iPhone and Facebook games. If the core of the game industry remains strong, then we should see strong investment in innovation ahead.

“November sales represent the best November on record in terms of new physical retail sales,” said Anita Frazier, an analyst at NPD. “It bests November 2008 by roughly $30 million, and that time frame was at the height of the music/dance genre sales.”

Another reason for the strong sales were the big Black Friday promotions this year. In October, software sales were up 6 percent from a year ago, while accessories were up 18 percent. The gains in November helped offset the weakness earlier in the year. Hardware sales were down 26 percent. Now, instead of down 8 percent, year-to-date sales are down only 5 percent. Based on seasonal trends, total physical retail sales should come in between $18.8 billion to $19.6 billion, down somewhat from $20 billion a year ago.

All game categories were up, with the exception of portable hardware and software, which are getting hammered by iPhone, iPad and iPod Touch game sales. The Xbox 360 platform accounted for more than 40 percent of total industry sales, thanks to the launch of Kinect on Nov. 4. And within Xbox 360 sales, accessories were 60 percent of total dollar sales.

NPD said that brand new game-related purchases account for only 70 percent of the total spend on video games. The remainder includes spending on used games, rentals, digital distribution, mobile apps, and other platforms. Black Ops sold 8.4 million units at retail, making it the seventh best-selling game of all time, counting only 21 days of sales. Black Ops also accounted for 25 percent of all units sold in November. Black Ops has huge numbers in terms of multiplayer engagement.

Thanks to good sales of Just Dance 2 and MTV’s Dance Central for Kinect, music and dance games were up 38 percent from a year ago. Nintendo still had the best unit sales for hardware with sales of the DS. NPD no longer shares unit sales for the hardware companies, but each company reports its own numbers. Nintendo said it sold more than 1.5 million DS units and 1.2 million Wii units in the U.S. in November.

Microsoft said it sold 2.5 million Kinect systems in 25 days. Sony, meanwhile, has said it has shipped 4.1 million PlayStation Move motion-sensing controllers (which debuted in September) to retailers. November marked the sixth month in a row that the Xbox 360 came out on top in sales. The Xbox 360 got a boost in June when Microsoft launched a smaller and quieter system. Year to date, Xbox 360 unit sales are up 42 percent.