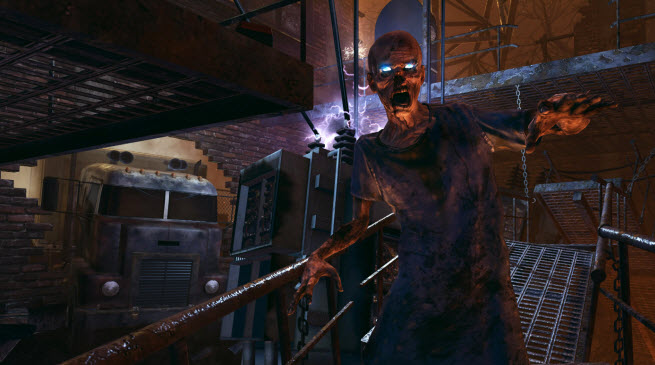 Activision Blizzard is unveiling more about the Zombies cooperative multiplayer mode in Call of Duty: Black Ops II video game today. And once you see today’s new Zombies trailer, you’ll realize it’s going to be bigger than ever. In fact, it’s going to be a big, bloody, burning massacre inside a much larger open world; it’s such a big experience that it could be considered a game unto itself. 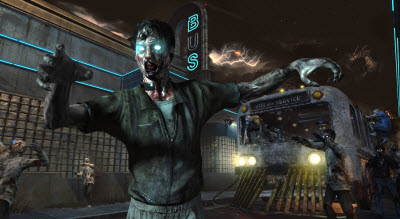 The zombies mode has no part in the story of Black Ops II, but it is part of the multiplayer experience because of popular demand by fans, said Treyarch studio head Mark Lamia in a meeting with journalists. (Treyarch is the Activsion-owned studio developing Black Ops II.) Shooting zombies in a postapocalyptic world is an increasingly popular past time with each Call of Duty game, and it’s a big reason why Call of Duty has become the fastest-selling game in history, with recent annual versions generating more than $1 billion at retail.

The various Zombies modes require players to cooperate. You either shoot the waves of attacking zombies or helplessly watch as the zombies eat your flesh. In the video below, the zombies are fast, and they leave little margin of error for someone who is a poor shot. You can blow a zombie’s head off and see a shower of blood erupt, but you’ll barely have time before another enemy accosts you. Some of the zombies are on fire, forcing you to run away from them or be consumed.

“This is the third game within a game,” Lamia said, in addition to the single-player and multiplayer games within Black Ops II, which debuts on Nov. 13. “It is born out of the passion of the team. It’s our cooperative mode where the team gets creative. We owe it to fans. It exists because they demand we make it. We are so happy about that. We love making this part of the game, too.”

Zombies was born out of the passion of the team, which has more freedom to innovate in an “anything goes” environment. The last version of Zombies came in the form of downloadable content (DLC), or cooperative multiplayer maps, about nine months after the release of Black Ops in the fall of 2010.

The new version will feature one to four players squaring off against hordes of attacking zombies. The trailer, which could quite possibly be one of the bloodiest ever in the game business, reveals a number of new playable human characters who use any weapon they can — including a big transit bus — to beat back their foes. And this mode is looking like it has a real story behind it, and that will probably get the fans speculating, Lamia said. Mainly, Zombies is just about fun core game mechanics.

“The story is crowdsourced,” he said. “People wanted to attach a story to it. This is our largest zombies world ever. It’s a big, expansive world, really open.”

The only thing that Activision says about the story behind the zombies is that it is a postapocalyptic world where the undead are rising. But the trailer shows that the human characters try to rally to a Custer’s Last Stand position on the bus, where the bus actually moves through the map and smashes zombies. Once players beat a level, they can take the bus and move it to a new location on the map. There, they fight more zombies and then move on again.

“There are new zombies and new special zombies, such as flaming zombies, and there is game play around them,” Lamia said. “The bus is a good or a bad place to be.”

One mode is called Tranzit, where you play a story. It is playable with one to four players in a massive world. You can gather with the other players at the bus and cover all approaches. But you’ll eventually be overwhelmed. You can also run out into the fog and take your chances alone. There, you might find some Easter egg-style rewards while alone on foot, Lamia said.

“There are exponentially more strategies than any we’ve put together before,” he said.

You can also play in Survival mode. Players can create their own custom-made playable areas. They can find mystery items, perks, and other kinds of goodies as rewards. And then they try to survive as long as possible.

And another way to play is in Grief mode. In this version, four humans square off against four humans, with the zombies fighting everyone. The human players can shoot each other, but they can make life harder for the other team. The zombies try to kill everyone, and the last surviving team wins. You can play it with two to eight players. You can cause trouble, or “grief,” the other team.

Players will be able to see more stats than ever with the new Zombies mode. Lamia said the game will have leaderboards for each game mode and each map. Players can also create custom games where they start at level 20 or something like that, making the beginning of the round more difficult. Gamers can play a match where only headshots count or the magic items are turned off. Matchmaking has been improved in the new version, Lamia said.

The soundtrack for the trailer is dubbed “Carry On” by the band Avenged Sevenfold (A7X). Check out the video below.