Game publisher Activision and its development studio Treyarch unveiled Call of Duty: Black Ops 4 on Thursday at an event at an aircraft hangar in Los Angeles. The leaders described the changes they made, including why there are no sci-fi features like thrust jumps and wall running.

They also explained why there’s more emphasis on teamwork and fewer grenades in the game. Considering the Black Ops franchise has about 200 million fans out there, these decisions will see endless debate until everyone gets a chance to try them when the game debuts on October 12.

At the reveal event, I interviewed a trio of Treyarch game developers about what they changed about multiplayer in Black Ops 4, and why they did that. They included Brittany Pirello, senior associate producer; Miles Leslie, producer; and Tony Flame, expert game designer. 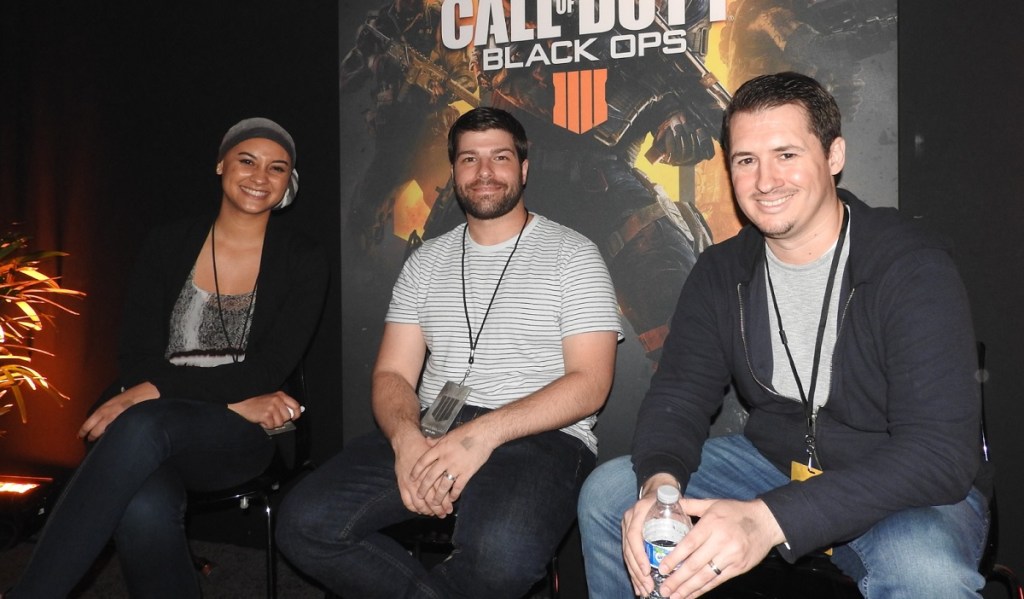 Above: Brittany Pirello, Miles Leslie, and Tony Flame of Treyarch.

GamesBeat: How do you guys feel about the reveal today?

Miles Leslie: Super exciting, because we’ve been working on it for so long. To finally get it in everyone’s hands is really exciting, seeing the reactions. Over the course of the last few years, it’s really been — how do you constantly push yourself and the studio? That’s been challenging for us on the multiplayer side. We have new experiences with Blackout, and then all the craziness with Zombies. I’m super excited to be able to just get it to the fans and see what they say. We have some crazy stuff. How are they gonna feel about it? I think they’re really gonna lean into it, but you never know.

Tony Flame: I’m just really excited that we’re able to get so many stations for people to play. We’ve never had so many people play the game so early before. I’m in there working on the gameplay, but I really feel like you need to be able to play it to understand and get a feel for everything we’ve done. It shows really well. You don’t really understand until you’ve played it, feel it, and been in the situation.

Brittany Pirello: The fact that they can play three different maps and different game modes out there—you really get to see people try different things in different environments.

GamesBeat: Is this the same thing we’ll see at E3? Or is there more coming?

Leslie: We’re not talking about what the E3 plans are. Not just yet.

GamesBeat: If I look at multiplayer, in some ways I don’t see too much difference from Black Ops III, other than taking a few things away — wall-running, jumps. How do you see the differences? Some things are simplified, taking this back in time to something less science fiction. But how is multiplayer really different?

Leslie: The way we look at that, it’s really about the totality of the experience. When we came off Black Ops III, we had innovated a lot of things in Black Ops III, and we wanted to create a different experience. Every game we do is completely different. When we moved to Black Ops 4, it was really about how to develop that experience. What we wanted to give was more paced team tactical approach to multiplayer. Throughout development, thrust jump and wall-running really went against that. We made the hard decision to not have those things, because it didn’t feel right for the Black Ops 4 experience.

When you talk about the totality of things that are new, it’s hard, like Tony said, for it to come through in the presentation. But what hopefully comes through is that the healing adds a lot more pacing. You have to make a tactical choice about when you’re going to heal and when you’re not going to heal. I think players will appreciate the depth that the specialists have now. With each of their roles – Ruin being a rusher, Crash with healing and support, Firebreak with denial — these add a lot of complexity to how the pieces glue together, which is very different from Black Ops III. Hopefully a lot of these things will come through as a different experience overall. 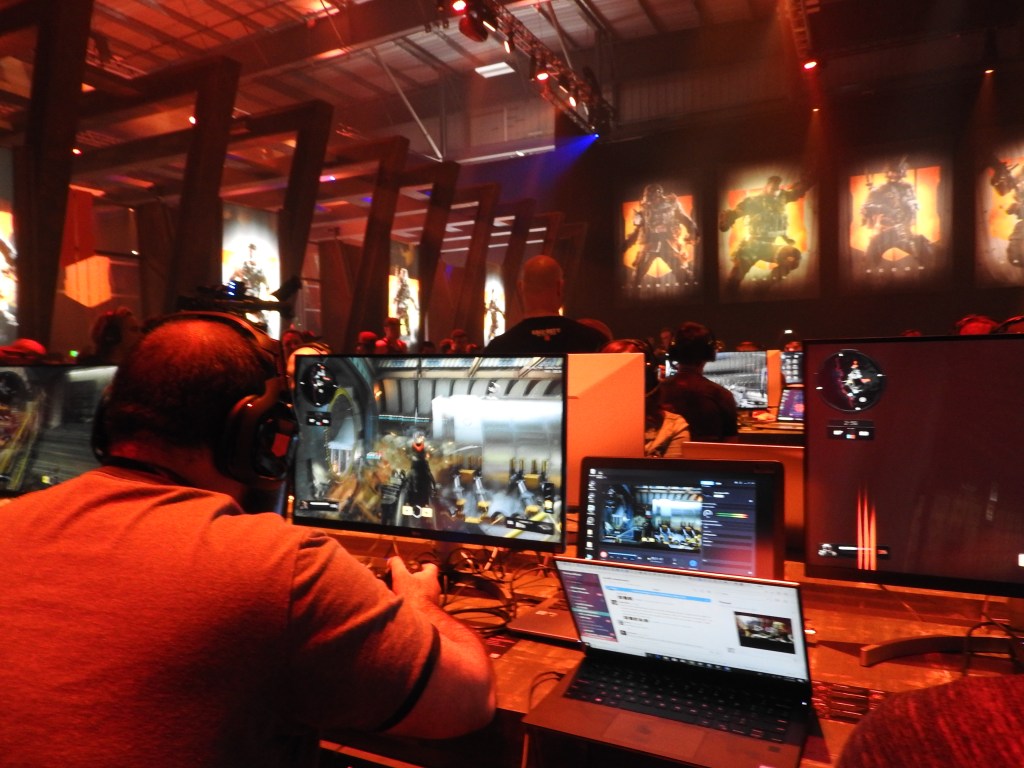 Flame: There’s a sense of groundedness that we’ve focused on that wasn’t there as much in Black Ops III. It’s not as much in the future. It’s pulled back. You’re interacting with cover in a more traditional way. When you go back from the movement we had in Black Ops III and get your boots back on the ground, you reintroduce the focus on that grounded gameplay, which lets us introduce new gameplay elements that are a lot more important, like the barricades and razor wire and blocking off cover. It brings everything back down.

Now a lot of other gameplay opportunities are relevant again. There’s the groundedness, the military feel. We’ve focused in on modern or near-future technology, equipment that people are a lot more familiar with, that’s relatable. We’re reinforcing that. We rebuilt a lot of those systems for gunplay, health, movement, all the animation systems. We’re focusing on bringing that up one, two, three levels higher than it was before. And then of course all the tactical elements Miles was talking about — the pacing of the game, focusing that in a bit more and letting players play different roles, forming a team with each player playing a different part.

Pirello: The fact that there are so many decisions the player can make throughout gameplay creates a new dynamic when you’re working together. You really have to decide who you want to choose going in and see what’s going to give you the edge over your opponents as far as team composition when you’re playing a specific map or a specific game mode.

GamesBeat: I noticed not as many grenades going off. Is that because each loadout is more specialized?

Flame: One of the key components of the tactical pacing, the tactical component — in previous Call of Duty games, you always spawn with an inventory of grenades and equipment. In Black Ops 4, that’s not true anymore. Now your grenades are on a cooldown, and not everyone has grenades. You can still pick grenades like you did before, but they’re on a cooldown, so you can’t just spawn and have this instant conflict. “I’d better throw my grenade right away.”

GamesBeat: The old spawn and throw.

Flame: Exactly! I’m going to wait until the right moment to use it, and then I can’t use it for a while. Once it’s ready again, I need to find the right time.

Leslie: It’s funny that you pick up on that, because that’s part of the pacing thing. You have to make a hard choice, like Tony’s saying. In create-a-class, if I want a grenade I have to give up something else, and it’s on cooldown to add even more of that pacing. That’s one of the new things we’ve done. Every decision you’re making has to be meaningful, so it isn’t just spawn, throw, spawn, throw. 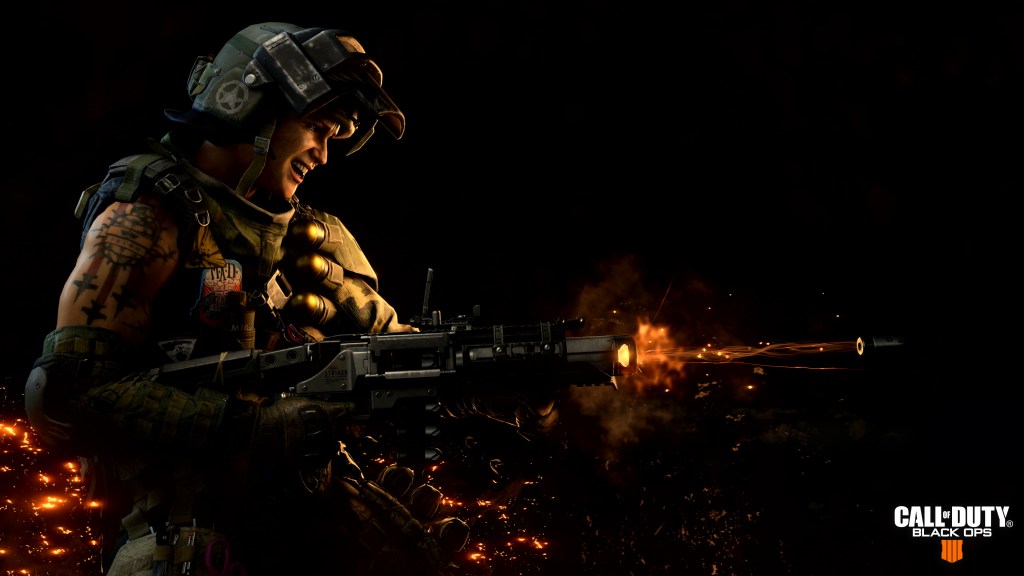 Above: Battery character in Call of Duty: Black Ops 4.

GamesBeat: There’s less verticality because of the lack of thrust jump.

Leslie: The maps have built-in verticality. If you played Seaside, you have the monastery tower that’s very high. There’s a way to get up there and mantle in there with all of our movement settings. And of course Ruin can grapple around. He’s the guy who can try to traverse high and combo in to that grav slam in interesting ways. The maps themselves will offer some unique experiences with verticality, as far as the players themselves, we’re trying to keep it grounded.

Flame: It helps understandability as well. We’ve solved that problem that would happen sometimes, where you get a player who’s so high that they’re not quite in your frame of view. It was something we tried to solve in the last game, and now we’ve solved it even further here. You always understand where your enemies are.

GamesBeat: Because you’re dialing back the time period, do you lose some of that more futuristic technology? The X-ray stuff seemed a little powerful.

Flame: We still have the vision pulse, to take an example, but it’s more grounded now. You have to put the goggles on. It has pulses and waves, so you can flash people and quickly pick up their heat signature, but then you’ll lose it and they’ll fade out. You’re not just going to have a flat ability to see people the entire time.

There’s an element there where we have to challenge ourselves a bit further. We can’t go as far into the future and extrapolate what might happen. We have to work around that. It’s a fun challenge for us. It’s something we’ve always had to do in Call of Duty anyway, because it’s based on that authentic, gritty military feel. We’re just indexing at a different time.

Pirello: It gives the player something to think about. If I have vision pulse up and it’s ready, but someone on my team is dead or not right where the action is, do I want to use it now, just for myself? Or do I want to wait until I’m a better position for everyone to use it?