April is the cruelest month. Call of Duty fans will be able to express themselves fully and get out their frustrations with the Eclipse downloadable content (DLC) for Call of Duty: Black Ops III on the PlayStation 4 starting April 19.

The new DLC features new multiplayer maps, including the re-imaginging of Call of Duty: World at War’s Banzai undead experience during World War II. Thanks to Activision Blizzard’s exclusive deal with Sony, PS4 fans get their DLC for Call of Duty a month before others do. It’s the latest in a franchise played by around 40 million players and month, and which has generated more than $10 billion over a decade.

“The incredible amount of engagement and response to Black Ops III from our fans continues to inspire all of us at the studio,” said Mark Lamia, the studio head at Treyarch, in a statement. “Eclipse continues to  demonstrate our commitment to delivering the most exciting gameplay experiences possible with each DLC pack. We are pushing ourselves at every turn to craft new and unique ways to play.” 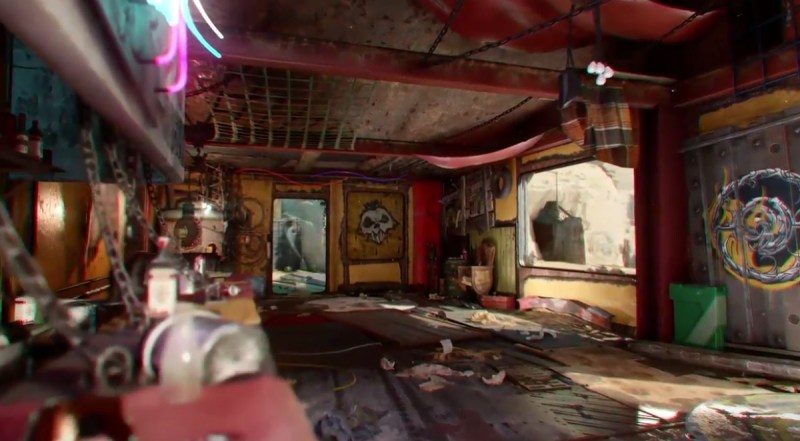 Eclipse comes packed with four new multiplayer maps: Spire, Rift, Knockout, and Verge. The latter is a re-imagining of the Call of Duty: World at War classic, Banzai. In Verge, you take control of bridges, fortresses, tunnels, and waterfalls. With Verge, you fight over a bridge. But you can now run on and up walls, use thrust jump. You can dive into the water and flank the enemy by swimming. That wasn’t possible in the old Banzai game.

The Spire map takes multiplayer combat into a futuristic sub-orbital airport terminal in the clouds. It has multiple levels and open areas promote intense, mid-range combat around a clean, high-tech civilian environment. If you step off the edge, you’ll fall back to the stratosphere. There are opposing overwatches, great for snipers. The other side of the map has a lot of cover, where knifers can get into close combat.

Above: Rift map for Eclipse

The Rift map is set in a harsh futuristic military complex, high above an active caldera. Rift funnels and forces tight, intense engagements, where the only way through is forward. You have to use the unique core movement opportunities to outsmart and outplay enemies as you traverse the suspended rail system. If you run straight ahead, you will run right into an enemy. You can wall run on a wall that goes right through the middle. You have to find a way to use the core movement skills like running on walls. It’s high risk and high reward. If you lose, there’s magma below.

And in Knockout, you fight in a traditional Shaolin temple with a retro twist. Knockout sets the stage for a bloody Kung Fu tournament. This mid-sized map showcases a sharp contrast between the mid-range engagements of the traditional exterior architecture and the tight, close-quarters of an eclectic 1970s-styled interior. It’s on a privately owned island, as it’s a faux temple built by a super-rich guy. There’s a central trophy room where teams will fight for dominance. There’s also a disco room with a disco ball, where you can bust a move and then move onto the rooftops.

Above: Knockout map in Eclipse