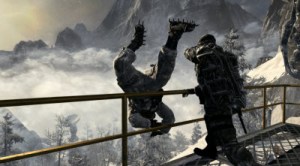 Activision Blizzard must get tired of setting records all the time.

Call of Duty: Black Ops has shattered the previous record for launch-day game sales set by its predecessor Modern Warfare 2 and raked in $360 million for the largest publisher in the world, Activision Blizzard announced today.

Gamers came out in droves and picked up 5.6 million copies of the game in North America and the United Kingdom when the game launched on Tuesday. That breezes past Call of Duty: Modern Warfare 2’s previous record of 4.7 million copies sold in the first 24 hours after its release. (Modern Warfare 2 went on to sell $550 million worth of games in the next five days after its launch.) Some gamers went so far as to skirt the law to acquire Call of Duty: Black Ops as early as possible, robbing a GameStop store of 100 copies of the game before it launched.

Call of Duty has proved to be an extremely popular game for console owners. The Call of Duty map packs alone have generated enough sales to be considered top-selling titles this year. Xbox Live gamers have played Call of Duty for more than 3 billion hours to date.

“Call of Duty has established itself as a true pop-culture phenomenon,” said Thomas Tippl, chief operating officer of Activision Blizzard, at BMO Capital Markets’ 18th annual Digital Entertainment conference. “We never seem to be surprised by who plays Call of Duty, because it’s everyone — there’s a soldier in all of us.”

Mike Hickey, an analyst at Janco Partners, said in a note on Friday that the game could sell more than 18 million units, generating $818 million in revenue. That’s less than Call of Duty: Modern Warfare 2 sold last year. Last year’s title sold more than 20 million units and generated more than $1 billion in sales.

Call of Duty: Black Ops has big shoes to fill. Modern Warfare 2 was a strong challenger for the game of the year last year by most publishers, and was universally praised for its strong multiplayer component. It had a score of 94 after 100 reviewers submitted scores on review aggregating site Metacritic. Call of Duty: Black Ops currently has a score of 90 after 44 reviews on Metacritic.

But that shouldn’t have Activision Blizzard sweating. The publishing giant is also releasing the next expansion to its critically acclaimed online role-playing game, World of Warcraft. Cataclysm, the third expansion pack, will likely sell at least another 12 million copies — based on the number of people currently paying to play the online game. World of Warcraft’s earlier expansion packs were incredibly successful, with its first expansion selling 2.4 million units in 24 hours and its most recent one — Wrath of the Lich King — selling 2.8 million units in the first day. And gamers won’t even need to show up at video game stores across the country to pick up the game, since Activision Blizzard has released the game for download.