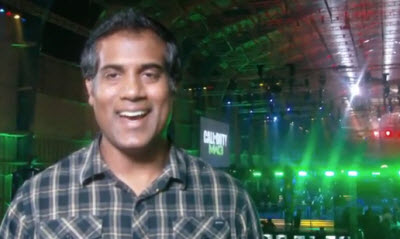 From everything we’ve seen so far, hardcore Call of Duty players are going to like it.

Call of Duty Elite is a social network for die-hard fans of the game series. Activision Blizzard hopes to be able to charge $49.99 a year for access to the service, adding a year-round revenue expansion on top of the sales of the game. Call of Duty Elite will debut November 8 with the launch of Call of Duty: Modern Warfare 3, the latest installment in the modern combat series that has sold billions of dollars.

Elite is perhaps the biggest differentiator between Activision Blizzard’s game and its main rival in the modern combat game space, Battlefield 3 from Electronic Arts. And Elite is deeply integrated with Modern Warfare 3.

This social network, which has been built over the past two years by Activision’s Beachhead Studio, will be accessible from the consoles, PC and smartphones, as well. For instance, you can checkin via a mobile app and change the configuration of your weapons for multiplayer combat. When you get home and turn on your console, the new weapons configuration will be waiting for your confirmation. To gamers, that adds a lot of convenience to the game, allowing you to stay in touch with Modern Warfare 3 wherever you are, said Beachhead Studio chief Chacko Sonny in an interview with VentureBeat.

You’ll be able to access the same details about your career stats and multiplayer choices whether you’re on the PC or console. With Elite, you can join groups based on your interests, such as sports teams. You can also form a clan that you can play with as a group in combat. You can make new personal connections in this way.

Many of the services related to Call of Duty Elite will be free — an intentional choice, since Activision Blizzard doesn’t want to alienate the base of 20 million monthly active users who are still playing the Black Ops game even though it launched last November.

Eric Hirshberg, president of Activision Publishing said in a press conference last night, “We made sure that we didn’t take anything away from people who are paying money for the game.”

You can, for instance, play the multiplayer versions of the game free and track your stats, as well. Players can still buy downloadable content such as map packs, which come out about four times a year, for $15 each.

But Activision Blizzard also said it will charge a premium subscription of $49.99 a year or $4.16 a month. If you bought the map packs for past Call of Duty games, you would have spent about $60 a year. The pricing has been a bone of contention, as competitor EA says its social network for Battlefield 3 will be completely free after gamers pay for the game itself. But Hirshberg says Elite is still a bargain.

For the subscription fee, you get some extra goodies. Activision Blizzard is promising access to 20 pieces of downloadable content with the subscription. The package includes all of the upcoming Modern Warfare 3 map packs and other unannounced details, too. You can now expect to get new content at a rate of once per month or more often.

You can also participate in daily competitions and events where you can win both real and virtual prizes. These tournaments won’t be just for the best players. Ordinary players will have a chance to play with people in their same skill levels and have a chance at winning.

The multiplayer clans will be part of the free service. But Elite members can level up their clans to get new rewards and new abilities as a group. Premium Elite subscribers will also get eight times more capacity to upload videos of their exploits, compared to the free players’ video features. And the Elite players will have access to expert strategy and analysis tips that the free players won’t get — an important feature for players who want to improve their game play.

Elite subscribers will get access to Elite TV, premium episodes of video content from Hollywood directors such as Ridley Scott and Tony Scott. The Scotts will shoot a series of contest videos featuring natural opponents, such as Democrats versus Republicans, in a show called Friday Night Fights. Another humorous show available to Elite members will be Noob Tube, with videos of funny player interaction and a lot of smack talk.