It had to happen. Call of Duty has been at the top of its game in the first-person-shooter modern-combat genre for years, but in my opinion, the series hit its peak last year with Call of Duty: Black Ops II. Call of Duty: Ghosts, which debuts today on the consoles and the PC, isn’t as good as last year’s game. And it also doesn’t compare favorably to Electronic Arts’ Battlefield 4, at least in my own personal opinion. 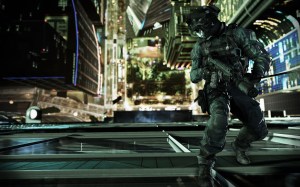 Call it gravity. That’s a big problem for publisher Activision Blizzard, which relies on Call of Duty as its blockbuster mature-rated video game franchise. Call of Duty has more than 100 million fans. Every day, gamers around the world play the equivalent of 1,900 years of Call of Duty. They’ve shot down more than 813 million unmanned aerial vehicles (drones) in the game. And they’ve played more than 18 billion multiplayer matches.

Those stats are not indicative of a franchise that is in trouble, and I believe fans are going to keep on playing this year’s Ghosts, too. I don’t think anyone should sit this year out, as players often do with sports games. But if they’re like me, they won’t enjoy Call of Duty as much as they have in years past. I played the Xbox 360 version of Ghosts. The new versions on the upcoming Xbox One and PlayStation 4 consoles will give players a better experience, no doubt. But those consoles will have plenty of competing titles, including some brand-new franchises that will represent some serious competition.

This is the 10th version of Call of Duty, and I’ve been a fan of every one of the games. It is no great crime to fall short of besting last year’s title, as many a franchise has had that problem. But Call of Duty has defied gravity for a very long time by coming up with more spectacular additions to the first-person genre. Its four tenets still include epic realism, great graphics running at a fast 60 frames per second, easy-to-play and hard-to-master, and the ultimate adrenaline rush. This formula has led to growing momentum for the franchise year after year, the very opposite of gravity.

And Ghosts lives up to those tenets.

But this one feels too formulaic, and it even rolls back some of the advances that Treyarch made last year with Black Ops II. Many of the series fans will appreciate the changes. Still more, however, will be puzzled by the growing gulf between the different ways to play a Call of Duty game made by Activision’s Treyarch studio (Black Ops II) and a Call of Duty made by Infinity Ward (Ghosts). These studios are dueling. That’s good for competition. But the danger is that the games could start to feel too different, causing a larger and larger divide within the Call of Duty community.

Call of Duty has already lost its title as the “fastest selling game in history,” as Grand Theft Auto V has taken that honor and isn’t likely to lose it. The threat to is supremacy is real. I’m not alone in this concern about Ghosts, as Cowen & Co. found this summer in its preorder analysis that Call of Duty: Ghosts is tracking well below Black Ops II’s preorder levels from last year. Having played the game, I can see why. 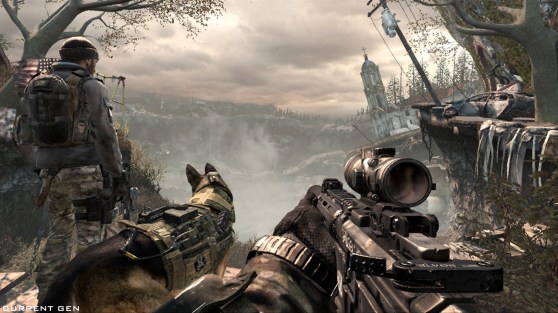 Above: San Diego isn’t in good shape in Ghosts.

The action is still awesome

The part that isn’t broken is the familiar over-the-top combat in Ghosts. Trigger-happy gamers are going to find plenty to enjoy. They receive a variety of cool new weapons. You fight in some very exotic places and under very different conditions.

The underwater level is very cool; you have to swim into enemy-controlled waters, avoid sharks, maneuver in a 3D space, and then engage in a firefight with guns that really work underwater. It’s also fun fighting on an oil platform in Antarctica above freezing waters. And then it has a battle where the air is very thin, but we won’t spoil that one for you.

As in most Call of Duty games, the story creates excuses for this military travelogue. A level in Las Vegas is well done, and it’s doubly difficult as you have to protect your dog while fighting. And I love the scene in Venezuela where you are rappelling down the side of a building and looking in the windows, searching for prey. Just as quickly, you get into the building and have to hide in a server room as guards walk by, and then you become the hunted.

The problem with the campaign isn’t that it’s bad. It’s just too short. Maybe six to eight hours in regular mode. But it is good that Infinity Ward leaves you wanting more.