The Call of Duty: Warzone free-to-play battle royale game has grown to more than 100 million downloads in the past 13 months on the strength of one major map.

But Activision blew up that map yesterday, with a nuclear missile landing on the city of Verdansk in a desperate attempt to wipe out a zombie infestation. And now Warzone’s creators have unveiled a new map, in the same place but set back in time to 1984. And the result is a new setting for Warzone heroics to unfold.

Warzone has become the big onramp to Call of Duty, alongside Call of Duty: Mobile, which has been downloaded 300 million times. It is bringing more new players into the franchise, which has sold more than 400 million copies since 2003. And this map change is critical to keep players engaged as Raven Software and Treyarch launch Season 3‘s new content this week.

This new map and the new season represent a big effort by the developers and an attempt by Activision to grab even more of players’ finite gaming time.

“A free-to-play game with a Battle Pass is completely different than our previous model, which is one game every year,” said Amos Hodge, the creative director at Raven Software, in an interview with GamesBeat. “And there are three or four updates throughout the year. It’s a completely new structure for us. It was an experiment for us; we didn’t know how I was going to go. And now at the year mark, we are getting in a groove and we’ve learned a lot from experimentation. So we’re sort of hitting our stride now. And I think next year is going to be even better.” 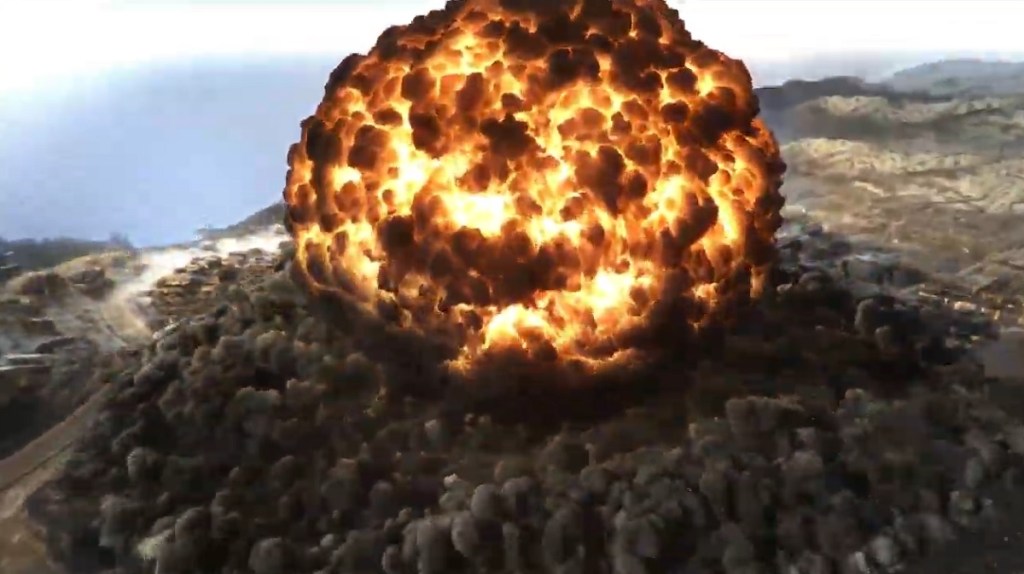 The events began as a zombie-infested ship crash landed on the outskirts of Verdansk. The zombies slowly spread across the map until yesterday, when they took over the city. Players who died in infestation zones became zombies, and then the nuke finally wiped out the city in its modern form. I played a round where zombies chased me, and then I turned into one and had to hunt for the last survivors on the map. And I watched as the map got nuked. It was a lot of fun, but I was a bit sad as well.

For those who are nostalgic about how Warzone saved us during the pandemic, modern Verdansk is gone for good. 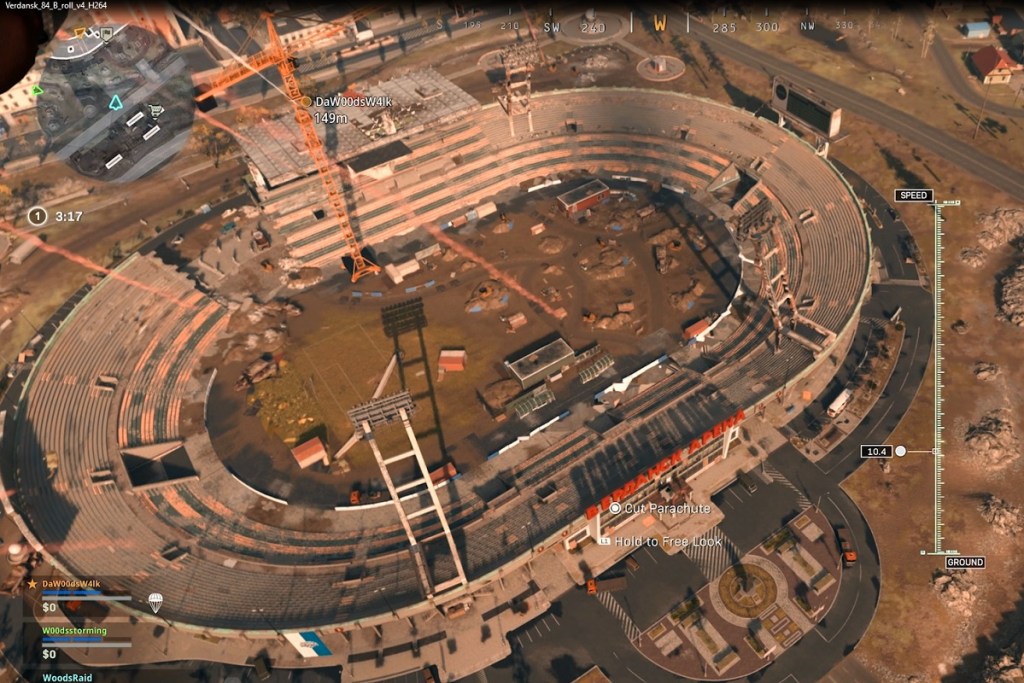 Above: A half-built stadium in 1984 Verdansk in Warzone.

The smart thing about taking the city back in time is that it will feel familiar to players who enjoy the modern map, yet fresh enough to attract a whole new group of players who feel like they can get in at the beginning again.

“The players know what happened before Warzone, and they get the narrative and the familiar place,” Hodge said. “So I guess it is the best of both worlds for us.”

“I think players will like the new map,” said Hodge. “I think through the positive lens of the evolution and quality of life improvements on top of new gameplay. And we fix some stuff.”

Now the game is taking us back to the era of Call of Duty: Black Ops — Cold War, showing Verdansk in 1984.

Players will transition from the destruction of Verdansk to a fleet of helicopters landing there in 1984, at the peak of the Cold War. 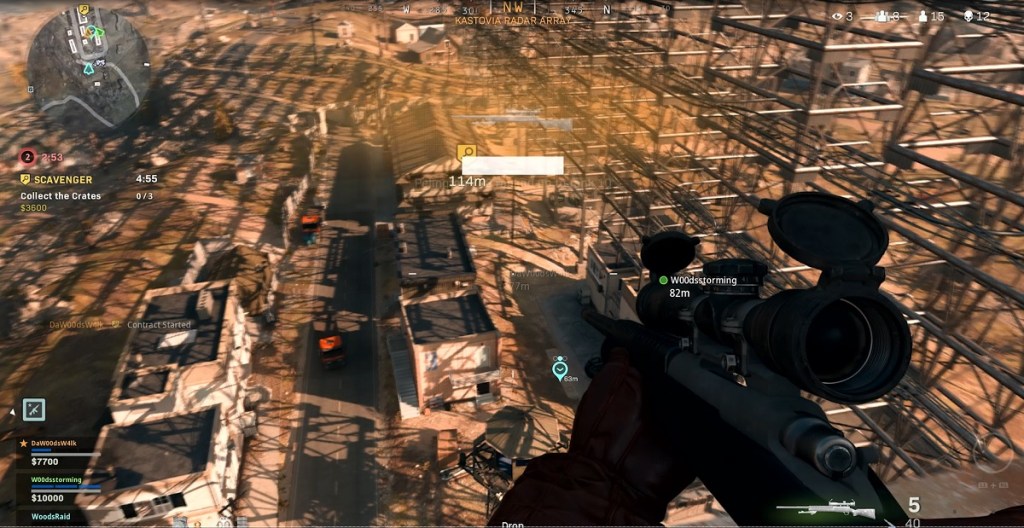 Above: The big radar array in 1984 Verdansk in Warzone.

It’s the same Warzone map that breeds familiarity for players who have played on the same ground for a year. But the buildings and key features are all different. There are huge landmarks of modern Verdansk, like the stadium and the dam that are still under construction in 1984.

The airplane boneyard, which is where I have landed many times to collect loot, is a vibrant airplane factory in 1984. The superstore is still there, but the developers fixed it. No longer are there tons of hiding spots for campers. There are more open spaces as the store can be seen in its prime. I have died many times in that superstore.

The overall atmosphere of 1984 Verdansk is brighter, as it’s springtime and the buildings aren’t in a shabby shape. When you land, it will feel like you’re dropping into a different place. There’s a huge radar array that rises near the radio tower. That array isn’t present at all in modern Verdansk. But it’s both a sniper’s heaven and hell. Snipers can land on it or climb and snipe in so many directions. But they are also vulnerable to parachutists from above, and probably won’t live long on it.

The stadium is also wide open now, with many more sight lines. And while the dam doesn’t exist, there are a bunch of buildings in that area, including a cable car that goes to the top of a hill, making the whole area easier to traverse.

If you don’t think a new map is a big deal, the developers at Raven said they have been planning it for a long time and worked on it for the better part of a year. That’s because it’s so much bigger than many Call of Duty multiplayer maps. All told, there are seven major new locations within the Warzone map, and five redesigned areas. That’s like creating 12 new multiplayer maps for the premium game.

Even the Gulag, where you go after you’ve been killed the first time, has changed. You now have more of a maze to duel with another killed player as you fight for a second chance to respawn on the battlefield. 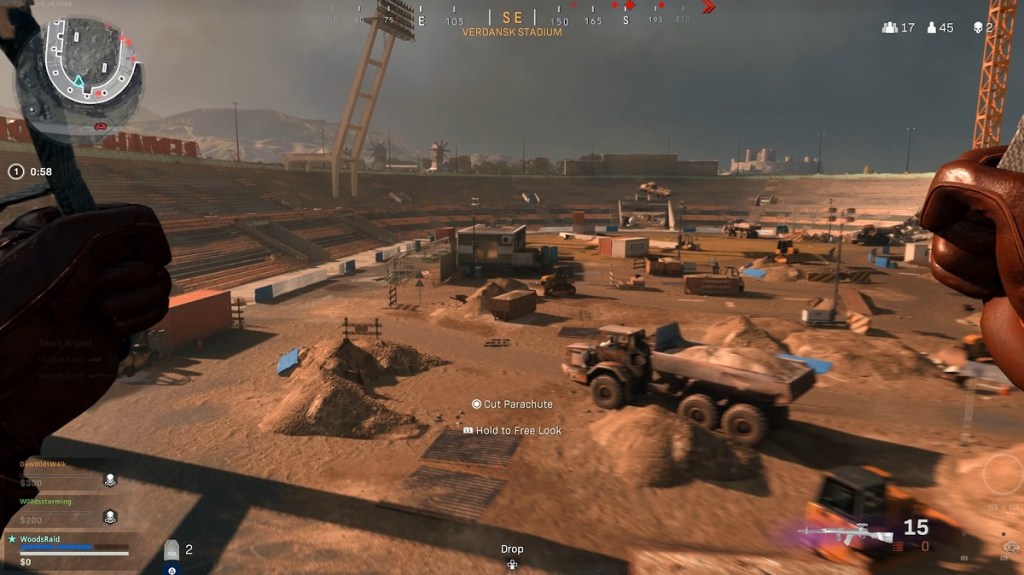 Above: The surface of the stadium in 1984 Verdansk in Warzone.

Many staples will stay the same, as the map will still feature a battle royale of teams (from one to four players) with a total of 150 players. The deadly gas encircles the city and closing in on the survivors until there is almost no place left to fight. The Resurgence mode, which featured 99 players in trios, will now be playable on the big map, rather than the much smaller Rebirth Island map.

Hopefully, the changes to the map and some new guns will make Warzone players happy, as they’re a notoriously whiny bunch with complaints about things like overpowered guns and cheating.

Activision president Rob Kostich said in an interview with GamesBeat that the security team has banned more than 475,000 accounts now for problems like cheating. That’s roughly one in every 200 players.

“We’re investing more resources there to make sure we provide the best possible experience for our fans. We have to take action, and also communicate about that, which we’re going to do,” Kostich said.

The team has also reduced Warzone’s size. It takes up less hard drive space now. With such things under control and the surprise success of Warzone no longer so fresh, Kostich has been looking on the bright side.

“When we launched Warzone, our goal was to make the best-looking, best-playing battle royale experience on the planet,” Kostich said. “I think we accomplished that. For Warzone in particular we have plans years into the future now for the things we have to do. We’ve been thinking hard about this. We know how important it is to our fans. Our team is super excited to deliver on that for the community.”

How Warzone is transformational 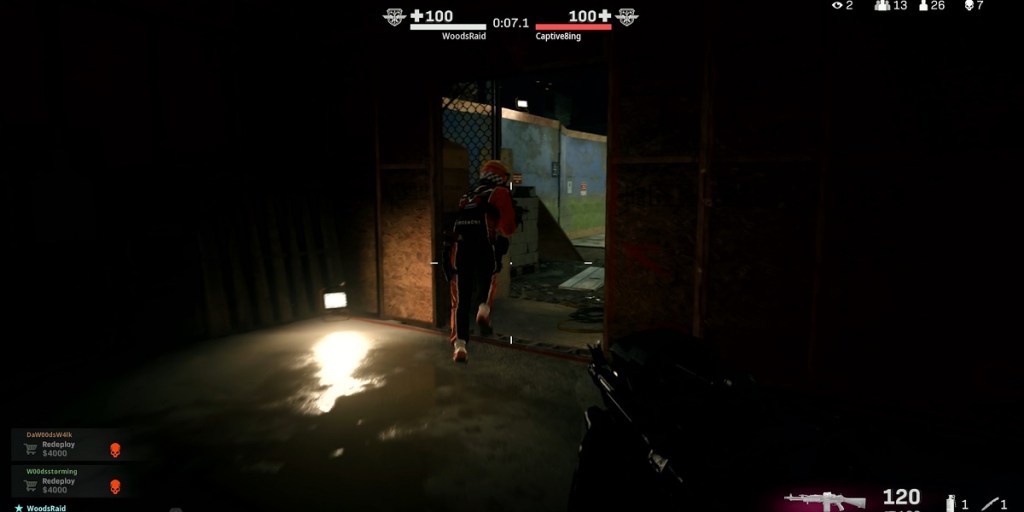 Above: Inside the new Gulag in Warzone.

The Season 3 of Warzone and the Cold War multiplayer game shows how much Activision is investing into year-round Call of Duty with its thousands of developers. It’s part of a strategy to grow the community far above the size it was just a few years ago.

“Warzone was the thing that was transformational to all of it,” said Kostich. “Certainly, not everyone on the planet has the ability to pay $60 or the equivalent to play Call of Duty. For my money, Call of Duty is the best moment-to-moment action experience there is. Warzone has allowed everyone to come in and experience Call of Duty. Now it’s become the focal point, the central point, the welcome mat if you will for the franchise as we go forward.”

He added, “What’s important to us is we give all of our fans an incredible fun experience with Call of Duty, whether you’re free-to-play or premium, whoever you are. In Warzone that’s the first entry point, where you’ll experience the latest and greatest the franchise has to offer. You’ll go on a narrative journey with us through time. It’s the thing that’s transformed our business. It’s made our players more excited about our premium offerings as well. They get engaged in Call of Duty, all it has to offer across zombies and everything else. 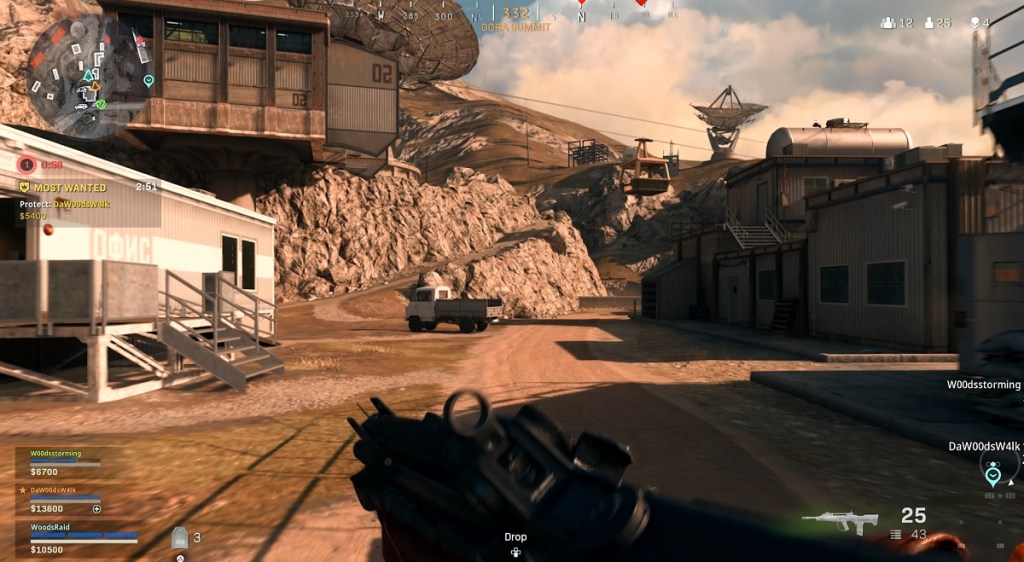 Above: The dam is transformed in 1984 Verdansk in Warzone.

Warzone has been a great way to upsell players from free-to-play to a paid game. There’s almost no friction in the transaction, as you just have to click a few buttons to upgrade from Warzone to Cold War, Kostich said. It’s seamless for players.

“Warzone being the central point of things going on, people understand all the great things that are happening in the franchise,” Kostich said. “If they want to get a deeper experience with a certain aspect of Call of Duty, we have those premium experiences, which will differ. It’s great to get those experiences, but we can take parts of those and fuse them into Warzone in the longer term or for a limited time, making that fun and interesting for the community.”

And while zombies are wiped out for now, Kostich said there is no reason they couldn’t come back into the story, given that the stories of Zombies, Cold War, and Warzone are now intertwined. Miles Leslie, creative director at Treyarch also confirmed in an interview, “The zombies are leaving for now.”

Hodge said it was a huge effort to create the AI for the zombies so that they could work well in Warzone.

“The reason Zombies was so important to us was from a technical perspective, we had not done AI in a large map,” Hodge said. “That is not an easy effort. We optimized the map just for 150 players.”