I’ve been pretty religious about playing Call of Duty multiplayer every year. But with Call of Duty: WWII, I managed to hit the highest level of 55 in the game yesterday. That is the earliest I’ve hit Prestige, as the top level is known, that I can remember.

That means I went through 55 levels in the 54 days. For a lot of Call of Duty gamers, that’s no big deal, as many were hitting Prestige just hours after the launch on November 3. I recognize there are far more talented players out there; in fact, 2,525,998 players are ranked above me. But for me, it’s a big deal, and I think it says something about the quality of this year’s game and its accessibility for older gamers like me.

And while I don’t think I’m ready for the esports circuit just yet, I feel good that I’ve gotten a little better, now that I don’t have to jump in the air and shoot while flying, as we all had to do in last year’s sci-fi game Call of Duty: Infinite Warfare. 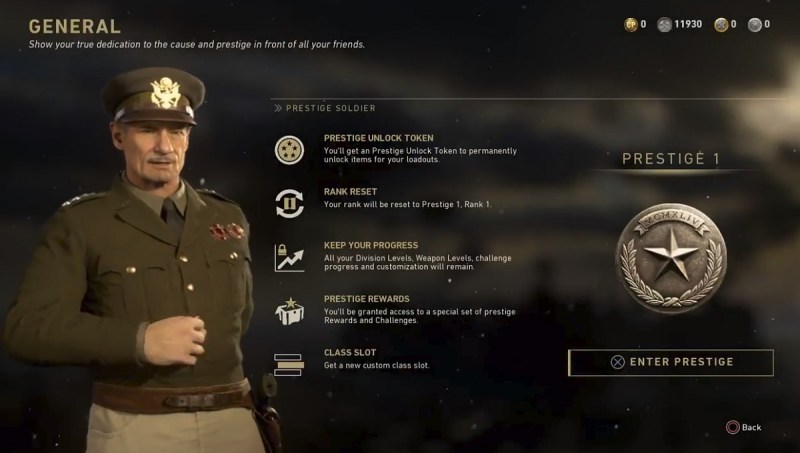 Above: General Davis greets players who make Prestige in Call of Duty: WWII.

I captured video of my Prestige ceremony. Before I hit Prestige, the top part of the cliff above Normandy’s Omaha Beach was roped off in the Headquarters social hub. A guard blocked me from going into that area. But afterward, the guard was gone. I walked through and met with General Davis, who congratulated me as I reset my rank to No. 1 and reaped a few rewards.

“Another bold step in a proud career,” Davis said. “Welcome back, soldier.”

I got to see my rewards, which included a Prestige Unlock Token. My rank was reset, but my progress in leveling up was preserved. I added a new class slot for customizing a new weapon kit, and got other Prestige rewards.

In the past, players hit Prestige in private ceremonies. But in the social hub of Headquarters, you can share the celebration with a total of 47 other friends. Everybody around me could see the fighter plane whizzing by with red smoke, and the tiny fireworks going off in the distance. Then a gold Prestige token appeared above my head, and I bounced around the Headquarters hub just to make sure all the other players saw it. If I hit Prestige more than once, the fireworks get even bigger. 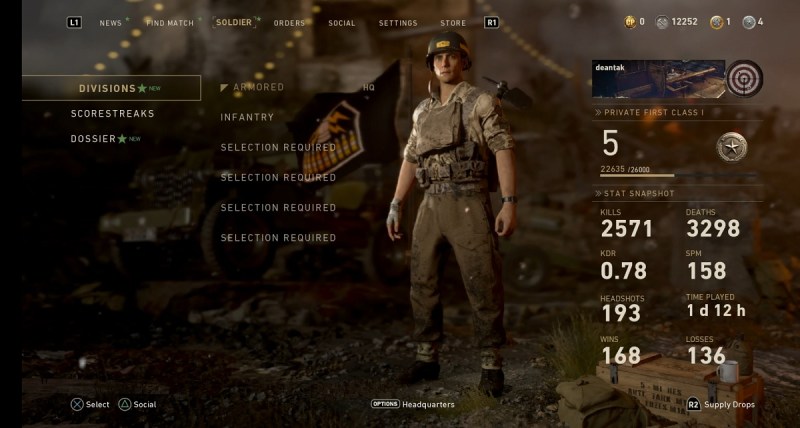 Above: Dean Takahashi’s combat stats in Call of Duty: WWII.

“We think Prestiging is the one of the most important things people do in their soldier career, and yet up to this point there hasn’t been the fanfare it deserves,” said Michael Condrey, cofounder of Sledgehammer Games, developer of the game, in an earlier interview with GamesBeat. “Headquarters allows you to prestige in front of the community, and so you’re allowed access to this exclusive space, the overlook where you meet the general, and the very ceremonial aspect. The entire community gets to watch you celebrate that moment. Fireworks go off. Planes go by. The more you prestige, the greater than fanfare becomes. You can imagine that max prestige guys, in front of a group of players — it’s a significant event.”

With Prestige 1, you return to Rank 1. You keep your progress on all of your Division levels, your weapons, challenge progress, and customization.

My Call of Duty stats

Above: Dean Takahashi’s stats. He’s not a very good shot.

As for my stats, the numbers are quite interesting. At the moment, I am ranked at 2,525,999 on the worldwide leaderboard. I’ve moved up about a million spots in the past month on that leaderboard. My ranking as a kind of weekend warrior tells you how many Call of Duty players are more hardcore than me. Then again, I think I’m ahead of millions of other players.

My best weapon is the Lewis light machine gun, though I’ve now moved up to an MG-42. I’ve also used a submachine gun quite a bit, mostly the M1928.

This year, I noticed that my performance got better as I climbed up the multiplayer ladder. That had mostly to do with how I leveled up my Lewis light machine gun. I earned new features such as a 4X gunsight and full-metal jacket bullets. That meant I could kill with one or two bullets more easily, whereas it took three to four before that. With a better weapon, I was deadlier on the battlefield, and that makes sense.

And this year marks the return to plain infantry combat. I don’t have boosters that can shoot me into the sky. It is more about shooting accurately and moving on the ground to the right kind of cover. Overall, that makes the game easier and more accessible. So if you’re wondering why this version of Call of Duty has sold so well — with initial sales about two times better than Infinite Warfare — I think it is because of the preferred WWII setting and the accessible gameplay. That’s a lesson for everybody.

Here’s my first match that I played after hitting Prestige.