Sledgehammer Games is known for well-paced storytelling. In Call of Duty: WWII, Sledgehammer applied its touch to the single-player campaign as well as to Nazi Zombies, the co-op campaign that comes with the blockbuster that launches today. I played a few rounds of Nazi Zombies and then interviewed the man who was in charge of creating it.

Zombies have become a tradition in Call of Duty games. They’re a cooperative experience that is like a free game within a larger game. And they have helped make Call of Duty into one of the industry’s biggest blockbusters.

Jon Horsley, senior development director, had the duty of creating Sledgehammer’s take on Zombies, and his team came up with a story that stemmed from the historical fact that the Nazis were interested in the occult. In Sledgehammer’s Nazi Zombies, you play as Monuments Men (and women), who are charged with tracking down the art that the Nazis looted from museums across Europe. They come across a village called Mittelburg and stumble across a Nazi research lab where bad experiments have been done.

The Nazis saw how the war was going, and they decided to see if they improve their odds by raising an army of the undead. The story is rooted in the Nazi fascination with the occult and doing horrible experiments on the living, but after that, it takes on a fictional life of its own. The Nazi zombies are bolted together, made from mechanical-electrical contraptions that look like they were born in the 1940s. The whole project was a first for Sledgehammer, and it gave Horsley’s team a chance to show off their creative talent without any historical constraints. 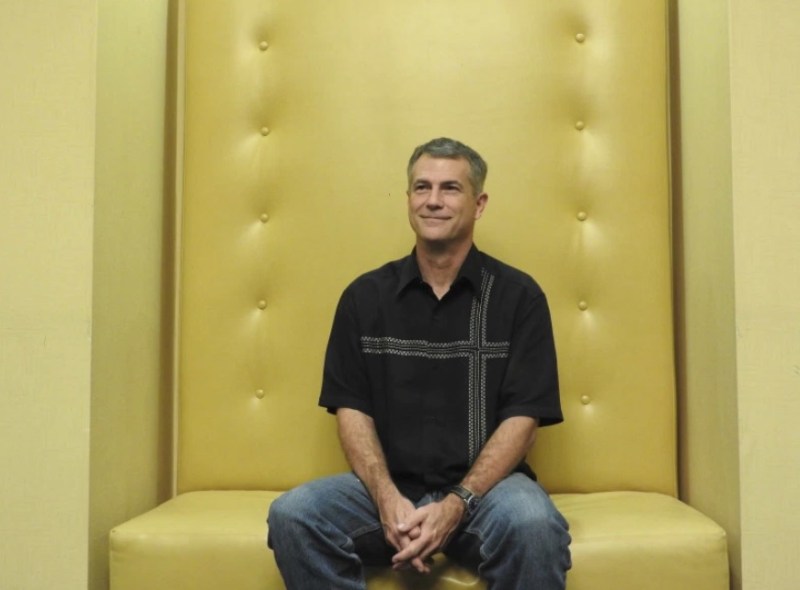 Above: Jon Horsley, senior director of development at Sledgehammer Games.

GamesBeat: Do you oversee Zombies in particular?

Jon Horsley: They call me the development director at Sledgehammer. I work with the team, the technical directors, on creating the game. Yeah, we’re a team of teams in the studio. We share a lot of code and tools, but we have individual teams connected to single-player, multiplayer, and Zombies. I work with the Zombies team in particular. We make bespoke content just for that mode.

GamesBeat: How many of these have you done?

Horsley: I’ve worked with Sledgehammer people for 20 years. We worked together at Crystal Dynamics, Electronic Arts, and now Activision. I’ve been with Sledgehammer itself for about a year and half. It’s the first Zombies game for me, and for most of the team.

GamesBeat: Did you have any sort of charter or starting point?

Horsley: Our initial charter was connected to the larger charter of the franchise in this release. WWII, back to the roots, a more grounded experience. The central creative conceit we had was, well, somehow the Germans have figured out how to make undead soldiers. That was the only thing we wanted to grant ourselves.

The rest of it, if you look at the zombies, they’re bolted together. They’re mechanical in nature. They’re soldiers created for a certain mission — battlefield zombies. They’re built to turn around the war for the Germans, who at this point in the timeline — things are going badly for them and they need to rally.

GamesBeat: The Nazis have more dead than living.

Horsley: At this point, yeah. These particular zombies, in our lore, were really destined for the Russians, the eastern front, but the players are fictionally part of a Monuments Men contingent. They’re out in Europe looking for Nazi loot. There were Monuments Women, too. We have a couple of these people and a guide. Elodie Yung is our actress playing Olivia Durant, a local guide. They show up in this village not expecting much trouble, and then they happen to stumble on the Nazi operation to build the army of the undead.

GamesBeat: So the backstory still has some relation to the Nazi interest in the occult, some of that history.

Horsley: History is a little veiled about what exactly went on in the ‘40s, but certainly the Germans had official divisions and interest at the top in exploring the history of the Übermensch and all these crazy thoughts in their heads about German perfection. The Barbarossa legends and what Himmler was doing. There’s some connection to that.

It turns out that blending history and fiction together — certainly the guns and the locations and the technology they might employee, you see a lot of what we call “dieselpunk” now. If you had that level of technology and this crazy way of capturing energy to imbue the dead with a living spirit — we were talking about what guides the zombies. Why are they going after people? It turns out that they know they’re missing real life, a soul, and they think that eating live people might give that back to them. There’s this weird philosophical zombie motivation behind why they try to eat people. The creative directors and designers on the project, they spent a fair amount of time trying to get it to be a cohesive whole.

It’s probably the darkest corner of Call of Duty. The timeline fits. The guns fit. The setting fits. All the things fit, except for zombies. It’s a weird addition to the mythology of Call of Duty, but it’s part of the heritage of the franchise. It’s been part of every release for a while. We put our spin on it, a Sledgehammer spin. We have a history of horror games. A lot of the same leads and directors have worked on some pretty famous horror games. When we had a chance to do Zombies, do it in a more serious tone, we thought it was a great fit, kind of a lay-up for the studio sensibilities.

Above: You have to use your Jolt currency to buy better weapons in Nazi Zombies.

GamesBeat: When you’re making something like that, what are some of the pieces of the craft you have to pay attention to?

Horsley: In this particular mode, we had two poles. We had one pole that was trying to make the game more accessible and fun, a little less difficult. We have a robust tutorial. We have hints built in and a lot of things to help players understand what to do next. Zombies tends to be a little opaque. Then we preserve that experience that our existing audience loves, where there’s a lot of hidden stuff in this game. It’s very difficult.

On top of that, we added a layer of horror that — we’re trying to scare people. We’re trying to make them shiver. We built a whole system around trying to build up tension and then break that with a jump scare, or break it with an attack or a sound or anything we think is going to get players’ hair to stand up.

GamesBeat: Do you have any tips for people? I found that R1 and L1 were very useful for getting out of trouble.

Horsley: I always tell people, when they first start Zombies — in this particular version we did a couple of things. We have an introductory casual thing we do. We have a lot of power-ups and rewards. We have a lot of durable upgrades that you get from session to session. You may have to restart the map, but we give you stuff as you go, whether it’s consumables or gun upgrades or perk upgrades. If you get yourself in a jam, you can use the two triggers to maybe make yourself invisible of have unlimited ammo. It gives you a little bit of relief from the pressure.

We put the player under a lot of pressure, so we like to give them some candy that can counteract that sour. Most of the time in Call of Duty you’re being attacked from a distance. The enemy is unseen for the most part. If you get into a firefight it’s over pretty quick. In Zombies, it’s right in your face. You’re being taken down by enemies right here. It can get fairly tense. We try to give them player some more ways to fight back. As you play more and more you get more and more upgrades and you come into the map with better guns, more abilities, more armor, more health. You can get over on the zombies early on. It gives you a chance.

GamesBeat: As a newer player I’d go in and just follow somebody around. I figured there was strength in numbers.

Horsley: That’s the other thing that goes on for players. Zombies are like the bank. You kill them to unlock gates and get better guns. You want to balance it out so you never have too much money. That usually means you’re killing more zombies than you need to. But you can’t have too little because you need to upgrade.

The cool thing about the Zombies mode, which maybe doesn’t always fit what we think about Call of Duty, is that it’s not adversarial. You play with your friends, with your family, with people you don’t even know, who are trying to help you. They want you to do well and you want them to do well. It’s a nice change of pace, because the main multiplayer is super intense and adversarial. Single-player is also — you’re by yourself. But the co-op stuff, you have your friends, or complete strangers.

I’ve played with a lot people online and it’s funny, but you make friends. You never want to find yourself alone. It’s built for people to follow each other and help each other out. You can revive them, give them money. You can defend their backs. It’s built for a cooperative experience. 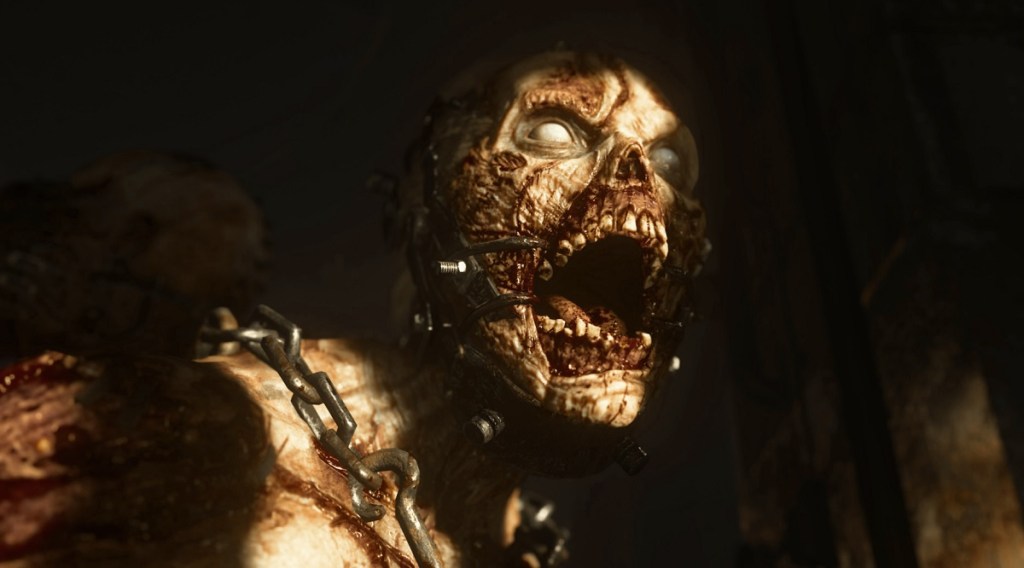 Above: This zombie is kinda good looking, with all the shadows.

GamesBeat: As you continuously work on Zombies, what would you say are some incremental goals that make it better than last year’s?

For Zombies, it’s the first time we’ve provided a tutorial, the first time we’ve provided in-game rewards. We have two modes, or two endings essentially. We have what we call a curated main line map unlock path. You can, fiction-wise, finish the map. The waves keep coming, but we provide you an ending, a finale. And then there’s what I’d call a hidden or hardcore path. That has a separate ending.