Call of Duty: WWII takes us back the beginning. It reminds us why we liked the series and why it became a $15 billion juggernaut. The military shooter puts you in the shoes of individual infantry soldiers, the ordinary people who learn what it means to become a hero, without celebrating war or forgetting about all of its horrors. It helps us remember the sacrifices of those who came before us, and why Call of Duty has sold more than 250 million units sold since 2003.

Sledgehammer Games undertook the mission of returning Call of Duty to the Second World War three years ago, a timely move considering last year’s disappointing performance for the science fiction shooter Call of Duty Infinite Warfare. Sledgehammer’s team of 300 people studied the war that claimed 65 million lives. The team traveled to Europe and felt what it was like to freeze during the winter nights in France, Belgium, and Germany. They consulted with historians to get the history of the U.S. Army’s 1st Infantry Division, and they pooled their storytelling DNA to tell the story of a single squad within the Fighting First. 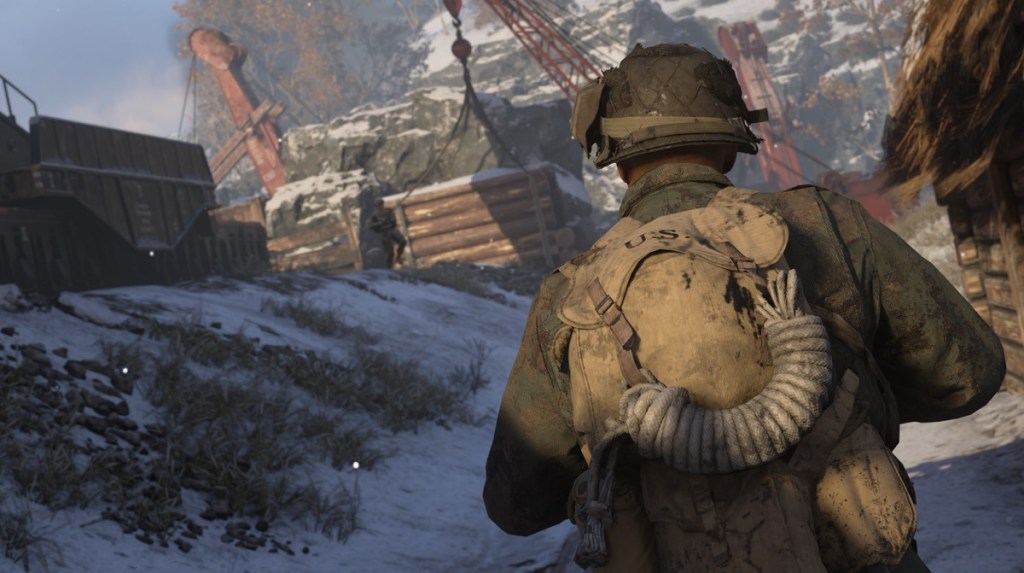 The result is a game that stays true to the mission. It honors the memory of ordinary people who became heroes under extraordinarily difficult conditions, as those veterans are no longer around to talk about it. It tells the story of men and women — from female French Resistance leaders to African American officers and Jewish soldiers — whose stories were left out of many histories. It shows the horror of combat, from brutal knife fights to death by flamethrowers. It entertains video game players with boots-on-the-ground combat. And while it encourages you to be a hero, you are not a lone wolf. The story shows that a hero is somebody who does something for others, like a friend, a squad, or the larger cause of the war.

This story has some story spoilers. Check out our Reviews Vault for past game reviews. And here’s our other Call of Duty coverage.

I attended an Activision review event and played through the 12-mission single-player campaign, which follows the squad of the Big Red One from D-Day to the Rhine. I also played the multiplayer, from the objective-oriented War mode to the hilarious Gridiron fantasy. And I got a taste of the Nazi Zombies co-op mode. Activision has packed several games into one package, delivering a value that fans have come to expect each year. I’m on my second run through single-player, now on the hardened difficulty setting, or one notch above regular. And I am thoroughly enjoying myself, as I find that each battle has been well-conceived with a good beginning and ending.

A story that focuses on a single squad 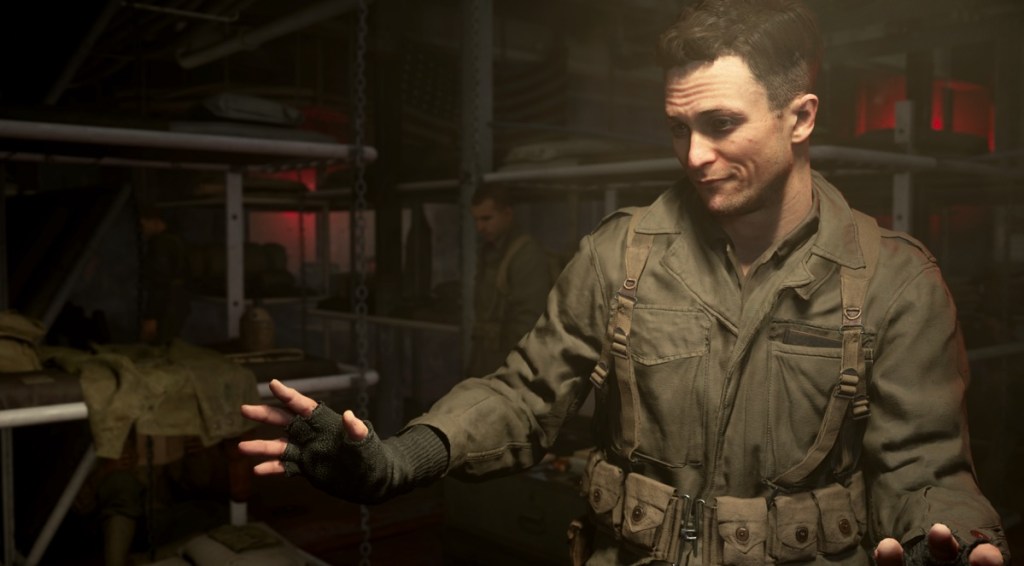 Call of Duty: WWII tells the personal story of soldiers forming a tight bond while also delivering a panoramic view of a war where the cause was good but the fighting was brutal.

When you land on the beach, you don’t even have a gun. Captain Turner tells you to remember your training and that your job is to pick up an explosive tube, dubbed a Bangalore torpedo, rush to the barbed wire, and blow a breach in it for others to move up the beach. This landing reinforces the idea that your first duty is to your fellow soldiers and your own squad. You aren’t shooting at all. Your job is to make sure that the other soldiers get through the wire to assault the bunkers, and eventually you have to save the life of a comrade who first saves you.

The squad fights through a dozen horrific battles in the single-player campaign. Each one is like its own nightmare. You crawl up Omaha Beach through withering fire. You drive a jeep through enemy lines. You face an artillery ambush that shatters the trees above you. You learn to stick with your comrades and make the ultimate sacrifices for them. During the battles, you are called upon to do heroic actions, like dragging a fallen soldier to safety, capturing enemies instead of shooting them, or escorting a little girl away from the fighting. Such acts of humanity take place against the backdrop of a war that was brutal in almost every way, from the collateral damage on civilians to the mistrust it bred among the conquered populations.

One of the stars, Ronald “Red” Daniels (played by Josh Duhamel) forms a bond with Jewish private Robert Zussman. They promise to protect each other’s backs, and in multiple missions they are called to live up that promise. Daniels saves Zussman after he has been stabbed, guards him with a sniper rifle as Zussman plants explosives, and searches for Zussman after he has been taken captive. Among the many stories, this one focuses on what blood brothers will do for each other.

Daniels is haunted by his past relationship with his own brother, and he knows it only takes a moment to determine if you’ll be remembered as a hero or a coward. From the very first battle, he learns that keeping your buddies alive is the highest duty, and that you don’t leave anyone behind. I constantly worried that one of these guys wouldn’t make it, and that meant Sledgehammer had created an emotional bond. 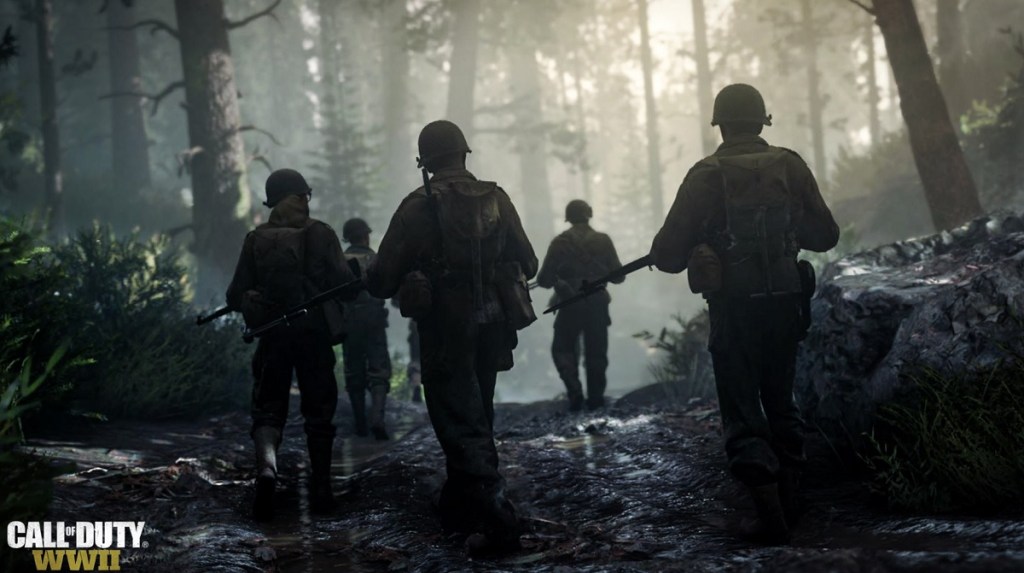 Sledgehammer was careful to respect the sacrifices of those who fought the war without glorifying war itself. It showed both the good and the bad of the American war effort. You liberate Paris and save the French, but you also see things that were otherwise buried in the official histories.

There is unexplained tension among the Jewish American soldier, Zussman, and his superiors. A black officer doesn’t get respect from one of his squad mates. A woman infiltrates a Nazi compound in Paris, kills the commander responsible for her family’s death, and then sets bombs to let the Americans into the compound. It is a reminder of the role that women played in the war.

There’s more diversity in this story than many of the old history books. When one of these characters comes to life in front of you, it makes you question your assumptions. Sledgehammer might be viewed as pandering to diversity interests, imposing a modern moral sensibility on history. But if you scratch below the surface, you’ll find that this diverse lot of people actually fought in the war, and the issues that they raise are real. 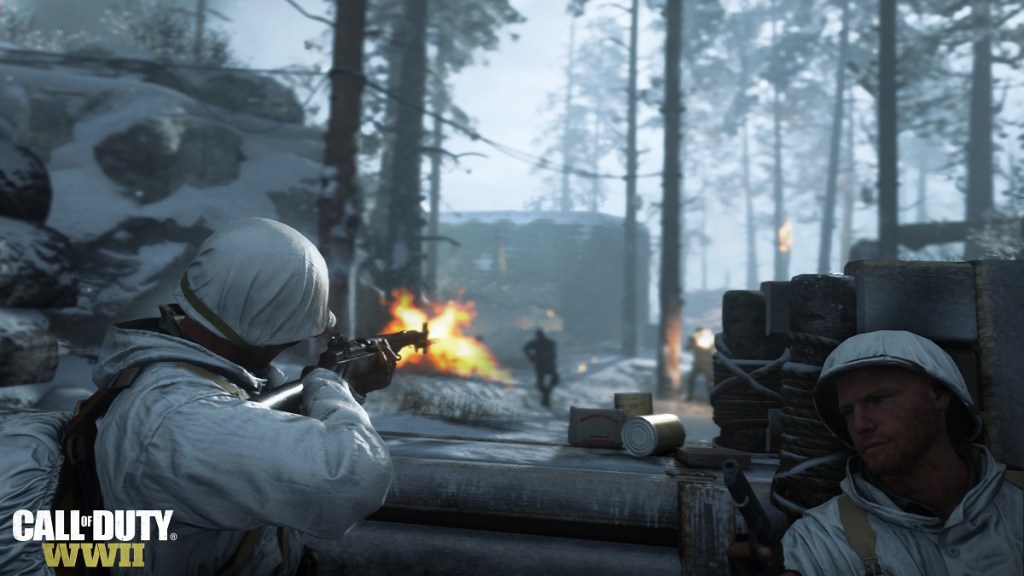 Above: Winter fighting in Call of Duty: WWII.

In the Hürtgen Forest, you really feel like you’re in the beautiful woods. Then German artillery rains down on you. The shells are pre-set to explode in the trees above you, so that the exploding wood sends splinters in all directions. The sound of splitting wood and the whoosh of artillery makes you feel like you’re really there, trapped in an ambush and racing through the forest to try to escape the barrage.

When soldiers breathe in the Ardennes, you see the frost coming from their mouths. It’s a small but nice touch that shows the attention to detail. There were a few times where I thought the facial animation wasn’t perfect. But most of the time, the transitions between the pre-rendered cinematics and the in-game animations were superb.

Inside a Normandy bunker, I got ambushed by a Nazi hiding behind the door. I fought him off and smashed his face with his helmet. I tossed it on the floor, and the helmet clanked and sent an echo through the bunker. I felt immersed in the moment. Such realism helps convey the brutality of war. 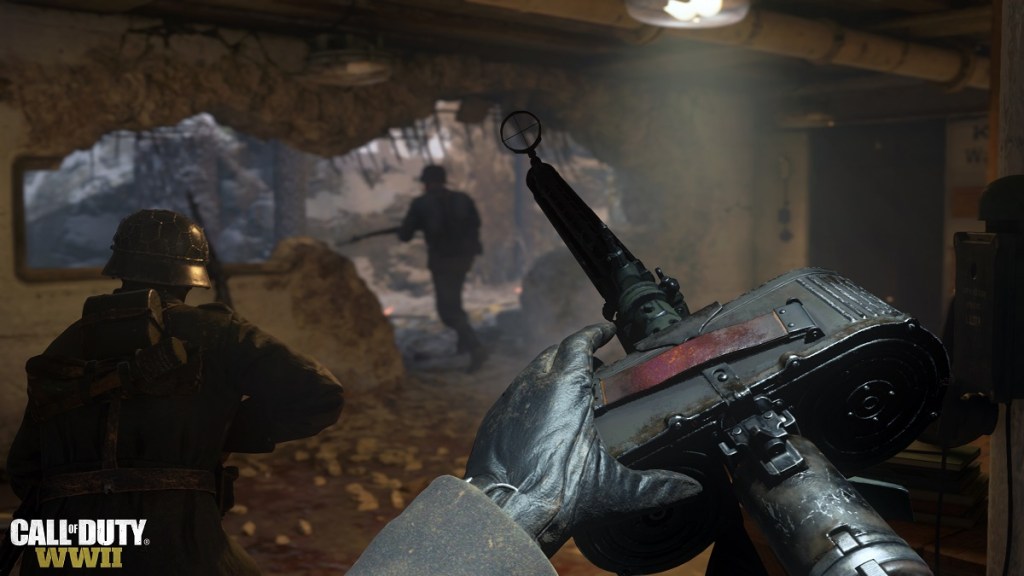 Multiplayer is a survival of the fittest. I was pretty disappointed with my performance in last year’s Call of Duty: Infinite Warfare. My kill-death ratio sank to an all-time low of around 0.40 — that means I was dying more than two times for every one kill I earned. But in WWII, my kill-death ratio is creeping back up.

The return to World War II has slowed the pace of multiplayer. You have time to think about your survival, to take your shots, and to hide behind cover when necessary. This is good for players with rusty reflexes.

There are also more ways to practice to get better. In the Headquarter social hub, you can play one-on-one challenges and practice how to use Scorestreaks or weapons. All of that means that you’ll have a better experience as you go from noob to a veteran.

War Mode stands out in particular because you aren’t just out for the kills anymore. Like Electronic Arts’ Battlefield shooters, War has multiple objectives that you have to take in order to win. Each match has two halves, and you switch sides at halftime. To succeed in this match type, each player must fulfill a crucial role. The emphasis isn’t on the kill-death ratio at all. It’s the best part of multiplayer because it forces players to find and fulfill a role in order to win.

Nazi Zombies is a nice bonus 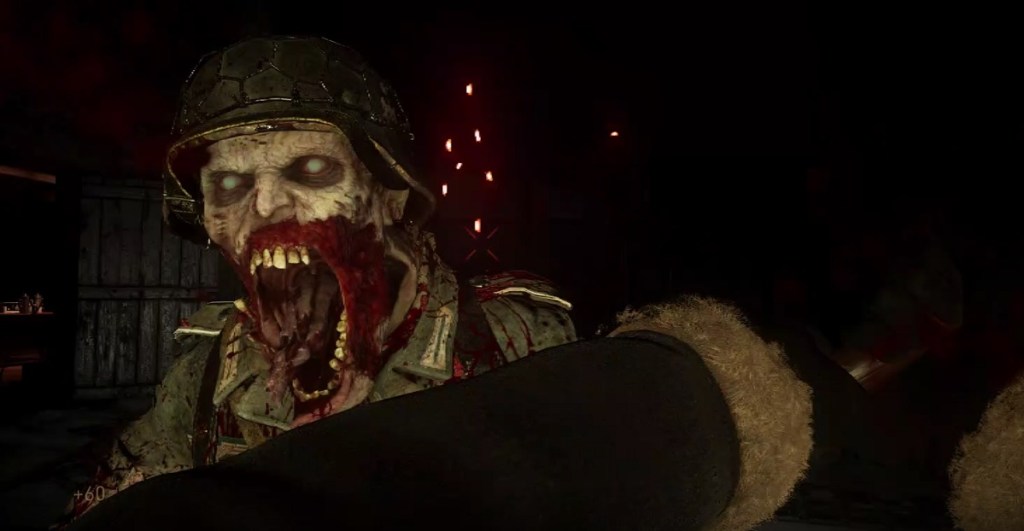 Above: Time to use the shovel on a Nazi zombie.

Zombies has come into its own as a staple of just about every Call of Duty release, and it’s a nice fit for people who want some crazy co-op action combined with a story that takes itself seriously. In the latest entry of the Zombies saga, Nazi occult scientists try to bring back the undead as a last-ditch effort to win the war. A group of Monuments Men (and women) stumble upon the Nazi plot while searching for lost artifacts. Simultaneously, engineering wiz Marie Fischer also crosses paths with the walking corpses while she is looking for her missing brother Klaus.

When all hell breaks loose, you and your team control this group of survivors through wave after wave of zombie attacks. As usual, you get a chance to upgrade your weapons, heal yourself, and replenish your ammo between each round. If you get taken down, your friends can heal you. More than ever, Zombies feels like it is going to graduate to its own game.