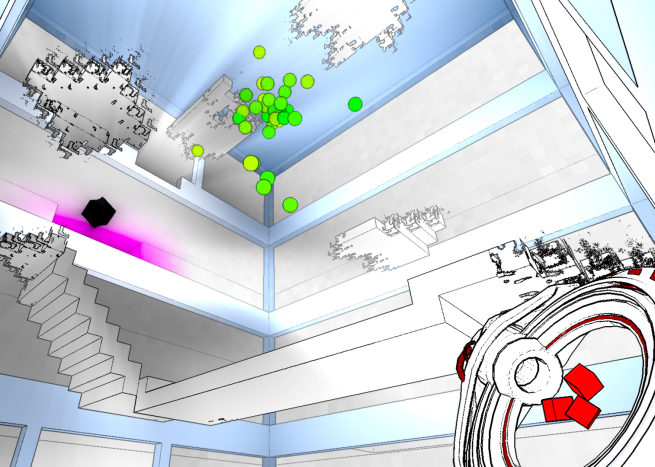 It was Top Indie Game of PAX 2012 from VentureBeat. It took six years to build by a solo indie developer. And a game with half of the attention to detail and imagination Antichamber has would be a smash hit — this bare-bones first-person puzzler is one of the most thought-provoking, engaging, and challenging video games ever developed.

The entire journey focuses on player discovery through exploration and sandbox experimentation. Players learn new skills on each new level and earn an upgradeable tool for gathering and placing blocks, adding complexity to puzzles. And like a good book that leaves readers in a daze, Antichamber is about deep puzzles that are almost always solved by subtle solutions. Creator Alexander Bruce has built a masterpiece of a game that intentionally dismisses foundations of development like plot, characters, and linear gameplay. Antichamber is a modern-day labyrinth, and Bruce has taken a step beyond Daedalus’ creation. Not even a literal trail of breadcrumbs can save you in this digital wonderland/prison.

I highly recommended that you don’t look up any hints or walkthroughs unless absolutely necessary as you explore Antichamber.

Antichamber begins in the “start menu” with an ever-updating map of the world that fills in as players visit more areas; basic controls and settings adjustment; and a wall of all collected hints. Oh, and a glass wall that dangles a door to Antichamber’s end on the other side. All the while a timer ticks down from an hour and a half, providing you a time to beat.

I’ll envy anyone who can finish this in 90 minutes. At 15-plus hours of playtime for me, Antichamber regularly tested my wits and patience, and it induced a rage as I pried and prodded every in-game object — animate or otherwise — in search of the one clue I’m missing. I’m not ashamed to say that I haven’t completed it just yet. Antichamber demands a consistent imagination and an open mind. Levels are designed to force out-of-the-box thinking and simultaneously provide essential practice of certain skills for future puzzles.

Playing Antichamber and solving puzzles is a reminder of the old days of gaming, when success was its own reward. In today’s world of achievements, trophies, hints, and tutorials, Antichamber feels fresh; the pure unbridled difficulty of the puzzles (which are too often oh-so-simple … once you solve them) gives you a real sense of accomplishment when solved. The last game that made me feel proud for actually achieving something was in Jonathan Blow’s 2008 indie hit Braid. Some of the puzzles in Antichamber will crush your ego. That makes completing them all the more satisfying.

Bruce took Leonardo da Vinci’s “Simplicity is the ultimate sophistication” quote to heart. Players start with nothing: no tools and no tutorial, just a flashing icon on the map indicating where to click. Instructions are at most one word long and often carry double or triple meanings. The first message reads “jump” over a chasm, and if you do leap, you plummet to the bottom — where you find a cheeky message. That fall is the first step to learning how to play.

This method of teaching players — through practice instead of the spoken or written word — is elegant, and the information is easier to retain. Written text comes in the form of digital screens on walls that offer subtle hints to puzzles, like a note about persistence just before what looks like an infinitely spiraling walkway. Just like the puzzles, all of the text is subtle and requires a little work and imagination to understand.

Antichamber is one of the leanest games in recent history. Every little bit is intensely focused on teaching players through gameplay and affording the space to experiment. The level structure, colors, and graphics are minimalist by design and offer only enough to progress. Thie is about solving puzzles, and nothing stands in the way of that.

One of the most beautiful aspects of Antichamber is how all puzzles and levels are, in some way, connected. Players can spend hours solving one puzzle after another, or they can completely circumvent whole sections of the world by taking another path. Because of this interconnectedness and the non-linear level design, there is no right or wrong way to play. And like a “choose your own adventure” book playing the game straight through is not necessarily the best way.

No matter how you play, it’s the same game every time, even if each new session feels completely different.

Antichamber is an intricate web, one where players have access to all sorts of puzzles at any time but may lack the skill or insight to complete them all. Many levels contain multiple puzzles and different exit points for each one but require advanced tactics to solve. These puzzles seem impossible early on, and while a few are, most are not. This intrinsic level design means that the game is beatable in less than an hour and a half, and that completing every puzzle isn’t necessary.

If Antichamber’s greatest strength is brilliant and mesmerizing puzzles, its greatest weakness is when players have trouble solving them. Antichamber is not what you want to play to unwind after a hard day’s work unless you really enjoy a good challenge. It’s hard, and it’s merciless. With no tutorials or direct hints, Antichamber demands your full attention.

Only the cleverest of you will finish this in a single sitting. Some puzzles have left me stumped for hours — and at least one for days. As positive as that may sound, not all players are patient enough to accommodate Antichamber.

Because the world of Antichamber is really one massive level, you could go make a single run through and see your work on any previously completed chamber. Unlocked doors stay open, blocks stay affixed to surfaces, and lasers remain blocked. This is a great way to speed through completed areas without mindlessly spending time resolving puzzles. That is, unless players press the escape button (ESC) to return to the main menu. This resets everything in the world and erases any trace of your actions. Every “escape” creates a clean slate.

This design makes sense, but it is awfully painful, especially for time-consuming puzzles. It can feel like punishment for viewing the map or seeing your progress. If you’ve lost your place or need to get to a specific location, too bad. Players either must memorize the map and puzzle locations, many of which are nearly identical to one another, or resign themselves to play through the same puzzles again. This also means exiting the game or turning off your computer is a forced reset. Starting fresh does train players to be more efficient through practice, but for anyone stuck and rapidly losing their patience, constant resets are unpalatable.

Antichamber is the film Cube sans horror, the threat of death, and poor acting. It’s insanely hard and painfully simple, just like any expertly crafted puzzle. Bruce has created one of the finest and most challenging puzzle games I have ever experienced. Now, if you’ll excuse me, I have a game to finish.

Antichamber is now available for PC. The publisher provided GamesBeat with a Steam download code for the purpose of this review.