Candy Crush Saga is the most popular mobile game in the U.S. after a dramatic comeback in the third quarter. As the mobile game crossed its fifth anniversary this week, its tally has crossed 2.73 billion sugary downloads.

In the third quarter that ended September 30, the match-3 game generated more than $250 million in revenue, up 97 percent from the same period a year ago, according to measurement firm Sensor Tower. More than 1 trillion game rounds have been played in the game since its launch, and 350 trillion candies have been swiped to date. At this rate, the $5.9 billion that Activision Blizzard paid to acquire King in 2015 looks like a deal.

Riccardo Zacconi, CEO of King, has been there from the beginning. Candy Crush Saga was one of 200 games that King created on its skill-based web site. The company began methodically converting those games to run on the Facebook Desktop, and the ones that were successful were converted to mobile. Candy Crush Saga did well on Facebook, but it really took off on mobile. It has been in the top-ten grossing apps for four years now. King continuously updates the game, which has 2,800 levels now.

Candy Crush Saga has a social media fan base of 80 million. That’s not bad for a game made with a tiny team led by Sebastian Knutsson in Stockholm, Sweden. King now has more than 2,000 employees worldwide and more than 293 million monthly active users. And it has spun out new games like Candy Crush Soda Saga and Candy Crush Jelly Saga. It even has its own game show. For the fifth anniversary, King launched a bunch of in-game rewards for players. 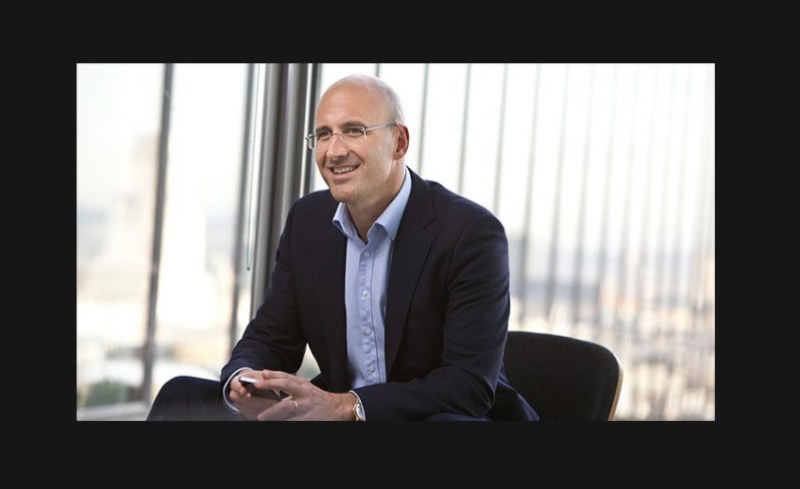 Above: Riccardo Zacconi, CEO of King.

GamesBeat: Why have you stayed with this so long, given that it’s been so successful? Some other people might decide to take it easy after this kind of success?

Riccardo Zacconi: [laughs] Well, it never stops, you know? There are always opportunities ahead that you want to take. A lot to do. There’s even more out there in the planning phase.

GamesBeat: What do you think here at the fifth anniversary of Candy Crush Saga?

Zacconi: It’s amazing. If you look at what we’ve accomplished, this year has been extraordinary. It’s the third quarter of growth for the company in bookings over all, and Candy specifically has done extremely well. Mobile is growing. It’s been the highest ever mobile growth in bookings. The franchise is doing amazingly well. We’re very pleased with how the team is done.

Of course, you can’t sleep. There’s a lot more we need to do in terms of innovation and thinking about the next level. But the team is kicking ass.

GamesBeat: What sort of tweaking are you guys doing that makes this game do so well in its fifth year? Is it just advertising it to the right people? Is it getting players to come back?

Zacconi: First of all, it’s focusing on the players who are in the game, keeping them entertained, surprising them every day. That’s the essence of what we’re doing. We are in a business where you don’t pay a subscription. You don’t have to pay anything to play, in fact, and so the barriers to exit are extremely low. Therefore, we need to keep them entertained every day. It’s surprising the user in the three minutes they play, whenever they have a break, and when they come back every time they come back to something fun.

We started by launching, every two weeks, a fresh level. Now we’re doing those every week, at least. Every day we’re releasing new content that’s time-limited. If you don’t come today, or this week, it’s not there anymore. You have to play today. We’re continuously innovating in the live game, releasing new features. We never stop offering new content to our players. That’s the essence of what we do. 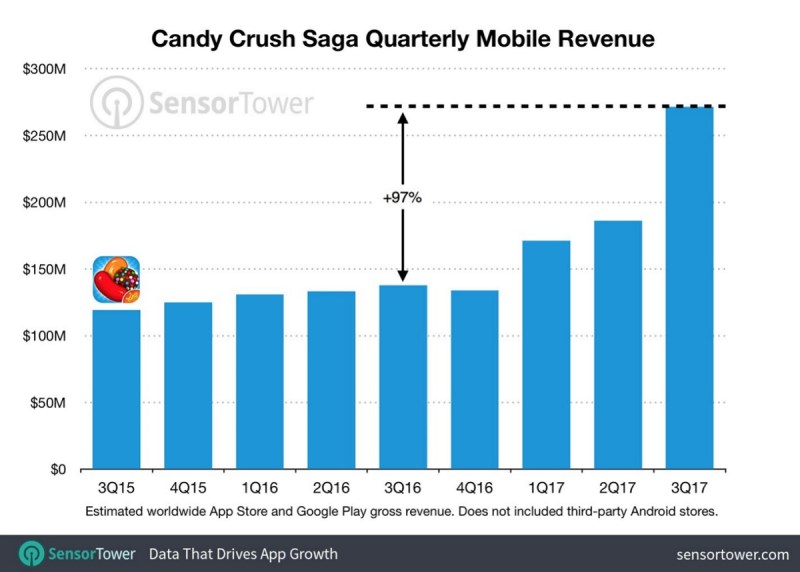 Above: Candy Crush Saga revenues grew 97 percent from a year ago in Q3.

GamesBeat: It certainly looks like you can’t take this for granted. Other games have started to slip in the stats, and they’ve been doing less advertising. It seems like things people thought would last forever can still be pulled down by gravity.

Zacconi: That was the initial assumption of the market, if you think back to when we went public. Certainly we’ve disproven that. It’s taken us a lot of work to come up with content that makes sense for our players. That’s what we also see from Activision and Blizzard. They believe in their franchises, in an IP that’s going to stay there forever and grow. That’s our strategy.

GamesBeat: Going back to the beginning, you had a lot of games on the web. You put them on Facebook as well. Eventually you moved to the focus on mobile games. Do you credit that process with surfacing Candy Crush as the ideal mobile game?

Zacconi: Absolutely. It’s not luck that brought us here. It was a lot of hard work. We developed more than 200 games covering all different aspects of casual, with all different genres and variations in those genres. We learned a lot with each game. Candy Crush, match three—we didn’t invent the match three genre, but we innovated considerably in that genre, both in the gameplay and in the framework around the gameplay.

Before we launched Candy Crush, casual was already the most popular genre. The most players were playing casual games, most of them women. But no company has ever managed to take a game with such big reach in casual to this level of commercial success. That success was created based on creating customer value in mobile. The roots of this are in a very deep understanding of casual and the experience we built on to get there.