Capcom at Gamescom in Cologne, Germany, officially announced a companion website to the company’s upcoming zombie survival shooter Resident Evil 6. The website, which is only a placeholder site now, will act as a hub of information and gameplay sessions for Resident Evil 6 owners when the game releases this October.

ResidentEvil.net will host a number of features that are generally available for other games, such as Halo: Reach and Call of Duty: Modern Warfare 3, including online game statistics and news from the developer. Along with traditional leaderboards and a friends list, ResidentEvil.net will feature social media notifications for your friends’ in-game achievements, social events for all players, and a secondary out-of-game currency that will unlock in-game items like costumes and digital figurines. And for the single-player campaign, the website will store any in-game documents found so that players can read them from a browser instead of directly in the game. 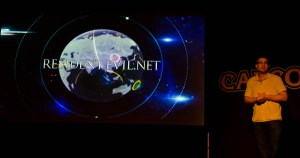 Events will showcase specific missions (as Epic did a few months ago with Infinity Blade II), where individual players can contribute to a collective mission and earn more points. The top earner will earn a championship badge, which then adds the player to a special leaderboard. Each event will enforce a time limit on the community, and all players contributing to the score will earn points to spend in the store.

Capcom is also developing a ResidentEvil.net app for smartphones and tablets, which will include all of the same features as the website. While the website and app will both be free, users must own Resident Evil 6 and connect their game console to the Internet. For social media functions through Twitter and Facebook, players can select when and how notifications appear: on all devices, phones/tablets, social feeds, and/or in the game.

Resident Evil 6, along with ResidentEvil.net, will release on October 2 on the Xbox 360, Playstation 3, and PC.