If Breath of the Wild was “peak Zelda” and Super Mario Odyssey was “peak Mario,” Captain Toad: Treasure Tracker is “peak Nintendo” — a fun and charming action-puzzler for the Switch. Largely ported from a prior Wii U release, this Super Mario 3D World spinoff is packed with the attention to detail and joy of discovery that define Nintendo’s best games.

Thanks to the Switch’s screen and resolution upgrades, Captain Toad looks great on Nintendo’s latest platform, and it can be enjoyed by players of all ages. Fans will love four brand-new levels based on Super Mario Odyssey, but they will lose out on several Super Mario 3D World stages that were pulled in the process. That small omission makes the Switch version a less than definitive version of a modern puzzle classic, but there are still plenty of great puzzles to enjoy.

Starting solely with the ability to walk — not jump, punch, or shoot — the titular hero and female companion Toadette separately explore four “books” full of levels, one level per page. In addition to controlling the character, you control the camera, rotating each level in 3D to reveal four or five hidden objects. 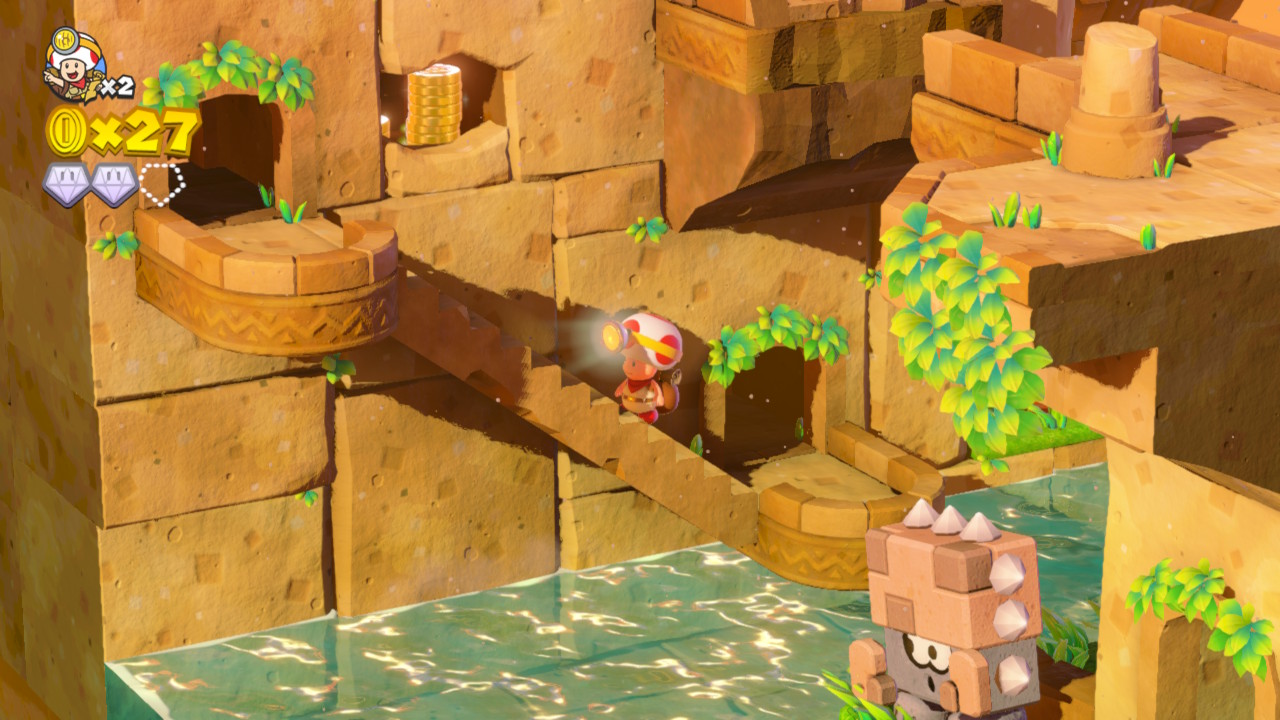 Above: While most of Captain Toad can be played without zooming in, that’s an option — and always reveals beautiful textures.

Each level is technically finished when you touch a Mario-like star or moon, but you’ll ideally collect three gemstones along the way. There’s also one bonus objective per level, like finding a golden mushroom.

Once you’ve retrieved the star, you can revisit a level to find items you missed. This becomes necessary when unlocking certain levels requires a specific number of gemstones, but you can also go back and locate a pixelated version of Toad for fun. 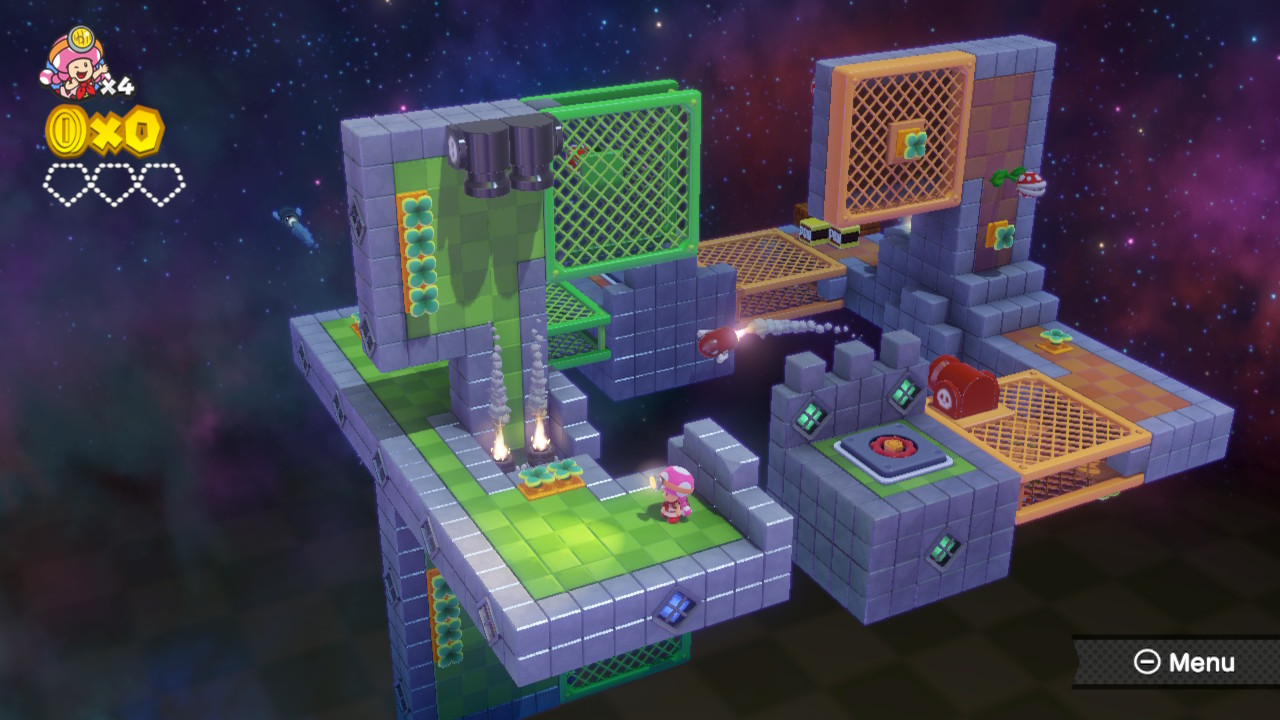 Above: Puzzles sometimes involve surfaces that can be rotated 90 degrees with a crank, using touch controls.

Nintendo makes the most of Toad’s physical limitations. He can unearth power-ups like a mushroom that lets him survive one enemy touch, a multiplier cherry that creates a simultaneously-controlled clone, and a rock hammer that briefly lets him chisel through bricks. But he’s not Mario, so he can’t toss fireballs, fly, or use other costumed abilities. Instead, he can unearth tossable turnips, go on a mine cart ride, and … well, not swim, but walk underwater. You’re also able to use touch controls to spin wheels and move platforms — more on that in a moment.

If you’re the sort of gamer who loves jingling coins, plucking items out of the ground, and discovering hidden nooks with treasures — read: Super Mario Bros. 2 — Captain Toad was made for you. Each of the nearly 80 levels is a micro-sized version of Super Mario Odyssey’s “garden in a box” world design, so though they’re designed to be fully consumed in 5 to 10 minutes of exploration, every one is packed with little treats to make you smile. 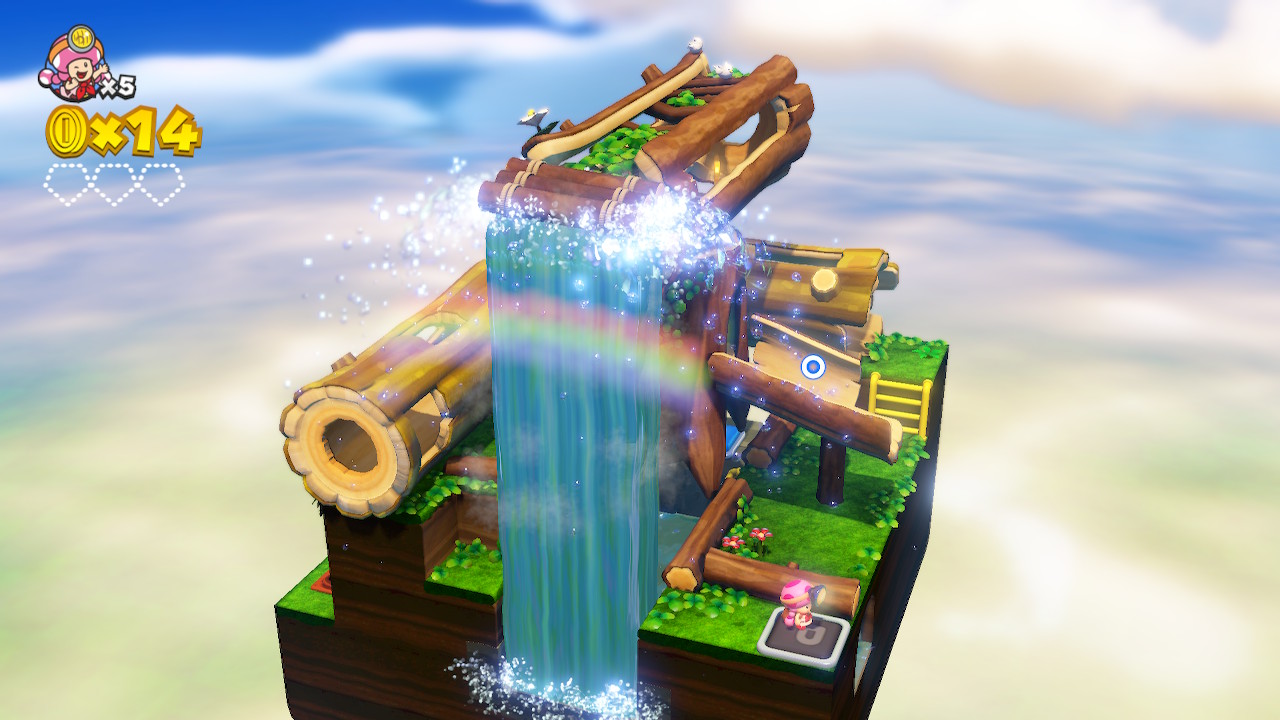 Above: Based on the Super Mario 3D World engine, the levels often include visually charming touches.

Stacks of glittering coins? Yes. Enemies that are closer to cute than menacing? Yup. Hints at just-out-of-reach items you know you can somehow grab? Of course. And bosses that test you without driving you crazy — that’s not always the case in Nintendo games, but it’s true here.

Captain Toad is the type of game where you’ll still find a few secret coins even if you accidentally fall off a platform. Kids and casual players will love it. 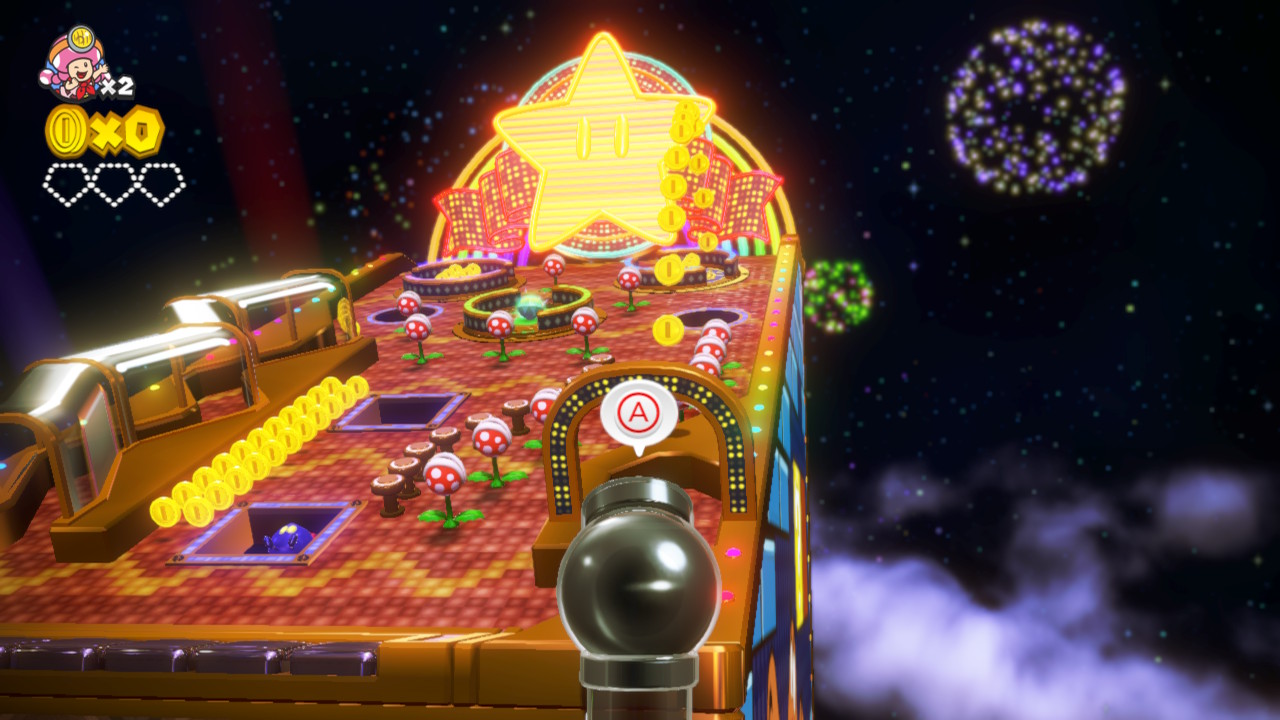 Above: The diversity of stages — including this pinball/pachinko level — is one of Captain Toad’s best features.

While Captain Toad’s music is peppy and pleasant, it doesn’t stand out; nor do the simple sound effects. The real star of the show here is the art, which despite being a puzzle game includes the triple-A-caliber details you’d expect from a Super Mario title. Whether viewed at a distance or zoomed in for close inspection, every level looks like you’re peering into an actual toy diorama. And boss encounters are basically Pixar movie-quality, minus the dialogue.

One of Captain Toad’s strongest suits is classic Nintendo level design. While sharing common goals, each of the stages is legitimately fun, and apart from bosses, you rarely see a visual theme repeat more than twice. Similarly, the levels generally don’t repeat the same idea, except during bonus stages where you might revisit a past level with a new goal. 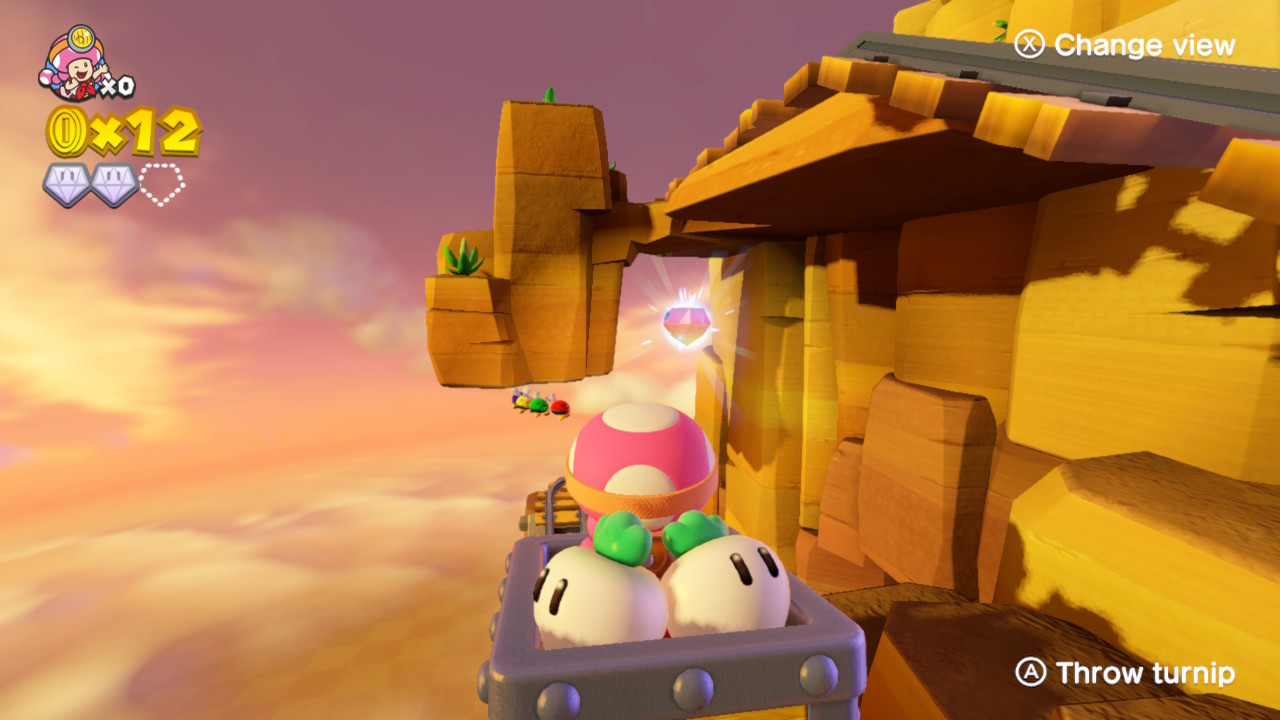 Above: Super fun mine cart segments let you take a first- or close third-person view of certain stages, while shooting turnips.

Nintendo also avoids brutal challenges. When one level appears to be completely overwhelmed by enemies, it’s quickly revealed to be an exciting first-person shooting gallery when Toad discovers a cannon. Mine cart rides — sometimes the bane of Donkey Kong Country titles — turn out to be enjoyable turnip-tossing levels.

Though most of the levels were originally found in the Wii U version of Captain Toad, Nintendo includes a handful of “bonus” stages based upon Super Mario Odyssey. A robust mini version of New Donk City and a mine cart version of Cascade Kingdom are the highlights, but Sand Kingdom and Luncheon Kingdom both make appearances, as well. 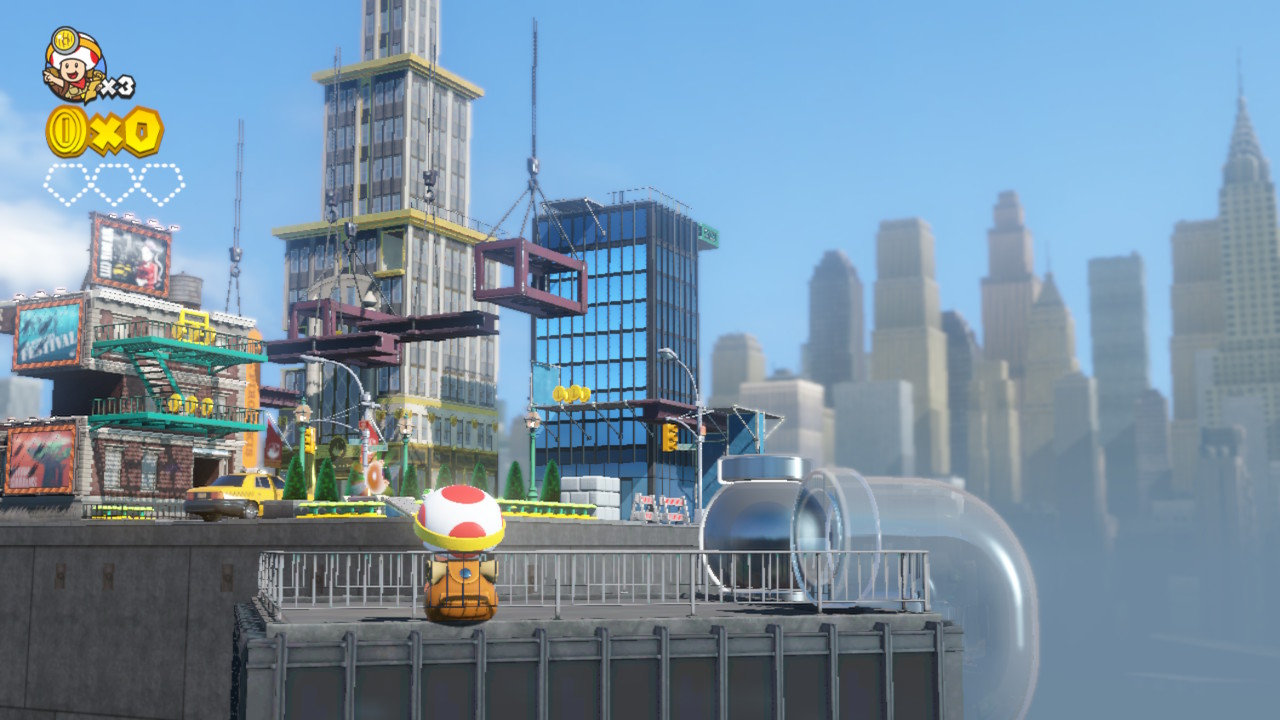 It’s a testament to Captain Toad’s quality that the new bonus levels are impressive without being the best in the game — everything in the title is on equal footing. You can unlock the Odyssey content by beating the game’s first three books or by using a Super Mario Odyssey Amiibo. I only wish that there was more of it.

Confusing controls in docked mode and a manual camera

By enabling the Switch to function in multiple modes — handheld, tabletop, and docked — Nintendo created controller challenges that seem to be popping up across ported games. With Captain Toad, the easiest solution is to play in handheld mode, where you can use the touchscreen to spin platform-moving wheels and move blocks. 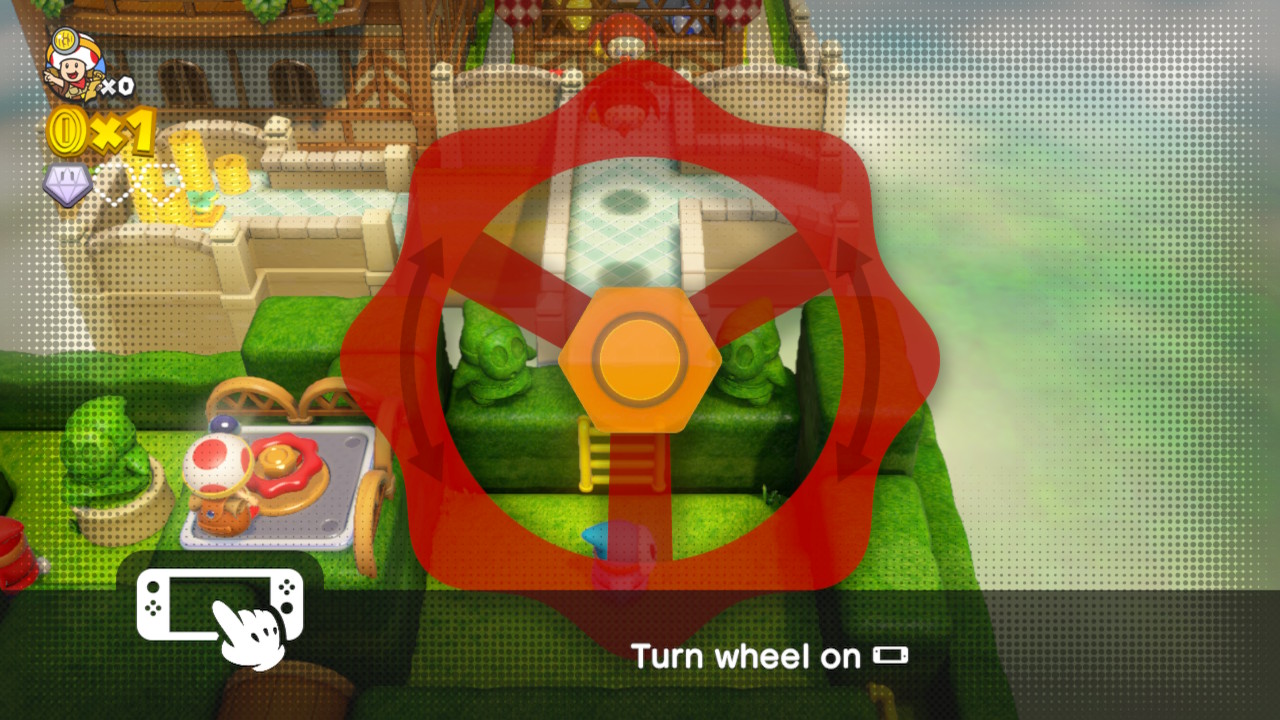 Above: Nintendo had to come up with separate control schemes for handheld and docked modes — they can be a little confusing.

If you play in docked mode, you have to rely upon an on-screen gyroscope-aided pointer to spotlight tappable objects and the ZR button to tap on them. To Nintendo’s credit, the solution works better than I’d expected, and is only intermittently necessary. But it’s not as easy as using the touchscreen.

Only one thing impedes Captain Toad’s ability to be easily enjoyed by younger players: the fully manual camera. Understood as an element of the puzzle experience, it’s an intentional challenge rather than a design problem, forcing you to learn to turn the diorama stages to reveal hidden passages. 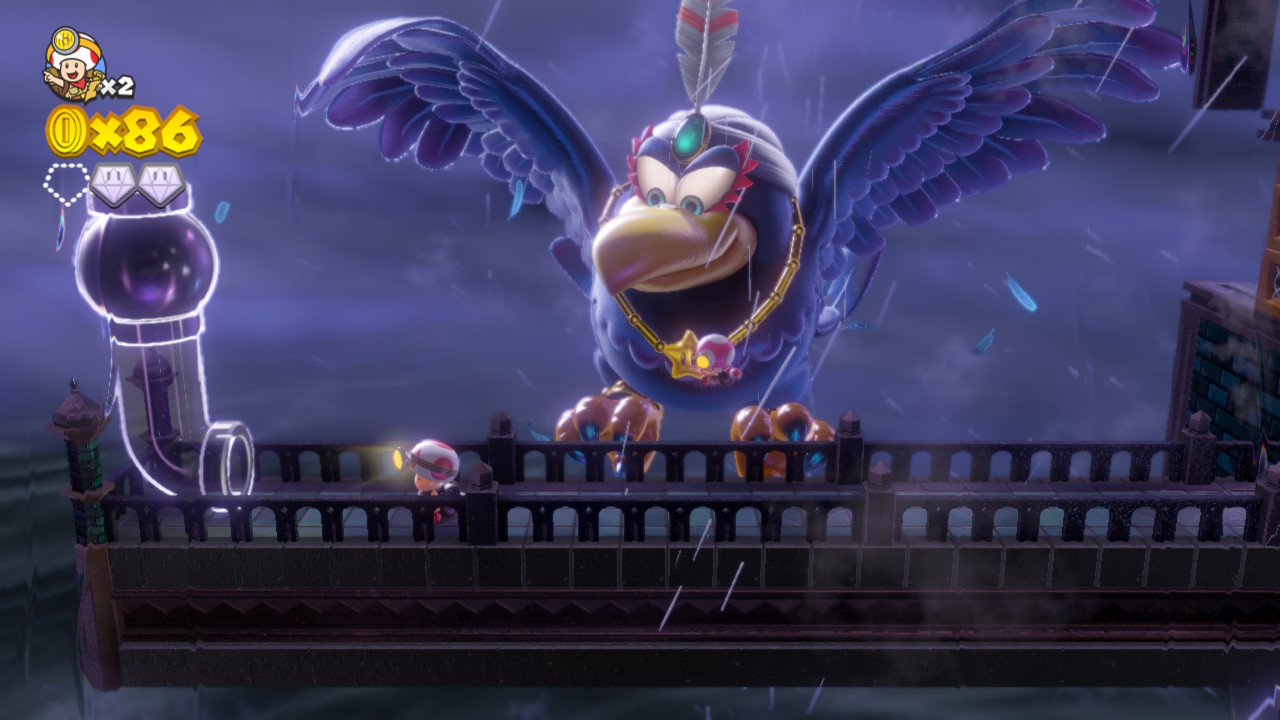 Above: During intense boss encounters, it can become challenging to control both Toad and the camera at once.

But especially during boss encounters, and occasionally during levels, it becomes easy to make a mistake solely because you’re responsible for picking the best camera angle while moving. Nintendo automates the camera a little during these scenes, but ideally would do a bit more — or design the boss battles to depend less on camera rotation.

They’re gone in the Switch version of the game, which is a small disappointment, even though the levels were criticized as being some of the weakest in the prior title. No one would say that about the Super Mario Odyssey levels that replaced them, which means that the Switch port is better than its Wii U predecessor, but it would have been great to have all the old levels — and more — in this version.

Captain Toad: Treasure Tracker is charming, fun, and — in a rarity for Nintendo’s Wii U ports — right-priced for the Switch. If you’re a fan of Super Mario 3D World, the Toad characters, or Super Mario Odyssey, consider this a must-play if you haven’t already purchased the Wii U version. It’s also easy to recommend to any fan of puzzle games, and to players aged eight and up. 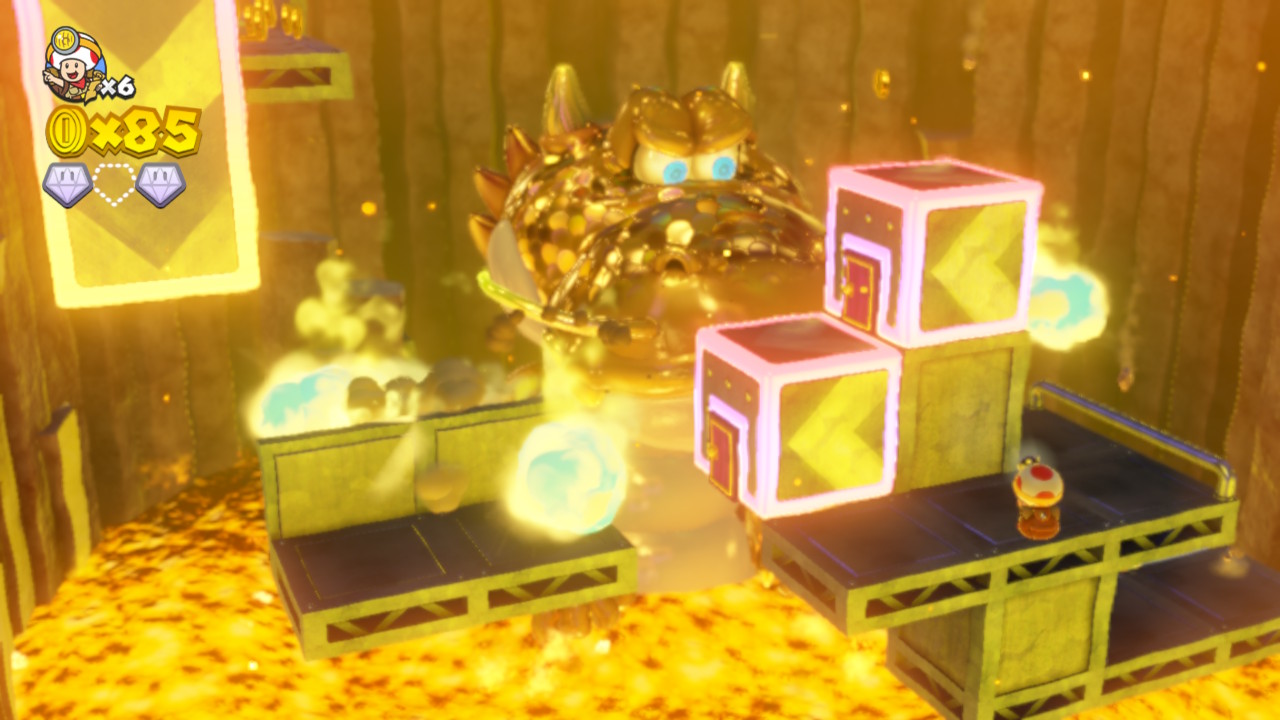 Above: It’s rare to play a puzzle game with incredible graphics, but this is that game, as a boss encounter shows.

That said, if you’ve already played Captain Toad on the Wii U, there’s not enough new content here to merit a repurchase — the Super Mario Odyssey levels are great, but you’ll blow through them all in half an hour or less. I hope that Nintendo builds upon what’s already here with additional DLC, as this is an enjoyable game with levels that are actually fun to replay a few times. After beating the game in several days, my only regret was not having even more puzzles to enjoy.

Captain Toad: Treasure Tracker comes out for Nintendo Switch on July 13. Nintendo sent us a code for this review.