I can’t remember the last time I changed my mind on a game as I have on Card Hunter.

After playing this browser-based card-collecting role-playing game (a free-to-play game coming Sept. 12 from developer Blue Manchu) for a couple of weeks, I was enjoying it, but I considered it as unremarkable. But the more I played, the more I discovered this free-to-play game’s tactical choices and depth. And it’s all wrapped up in a retro package that’s part joke, part homage to old Dungeons & Dragons modules, some of the most cherished dungeon crawls ever written.

Here’s how Card Hunter went from being OK to one of the best games I’ve played this year. 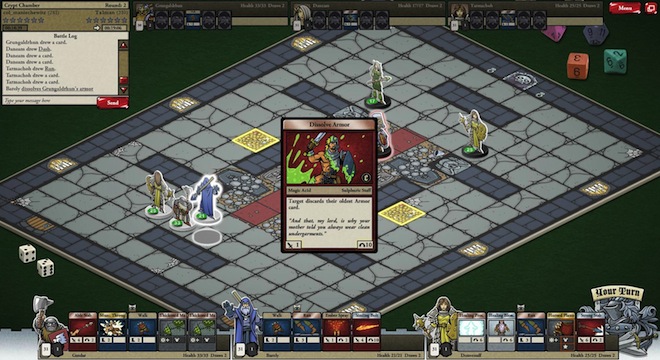 Above: Sometimes it’s more important for your Mage to strip armor from foes than to blast them with damaging spells.

Standout card combat
Card-focused video games frustrate me. They’re often more about building your deck than the actual combat. Card Hunter emphasizes both. Cards are attached to your gear and skills, and the weapons, armor, and other items you equip determine what’s in your battle deck. And you must gather a stocked arsenal — I sometimes had to rejigger my gear between an adventure’s stages (you do this when you collect treasure) as foes introduced different attacks or spells (like skeletons who are resist to piercing weapons, forcing you to switch from spears to hammers and maces) or the maps presented different terrain challenges.

Fighting is turn-based. Raised on such role-playing adventures (be they paper-and-pen, tabletop, or video games), I’ve always preferred this approach to real-time combat. Every choice is important. The enemies you face can have a variety of cards. And while you can’t see what’s in an enemy’s hand, you can see how many cards it has, which can give you a clue as to how many armor or movement cards it may have as you plan your turn (though once used, armor cards remain visible for the rest of the round).

Your gear also calls for a tactical approach. Stronger weapons, armor, and items have either minor or major power tokens. As you level up, you gain more power tokens for equipping gear. The tactics come in how you use these — you may have three power tokens, but you might have four weapons (one requiring two and the others needing one) that you want to use. And you might want to wear a helmet and shield that cost a token apiece to equip as well. But you can’t take it all into battle. I spent an ungodly amount of time experimenting with different loadouts because of this. 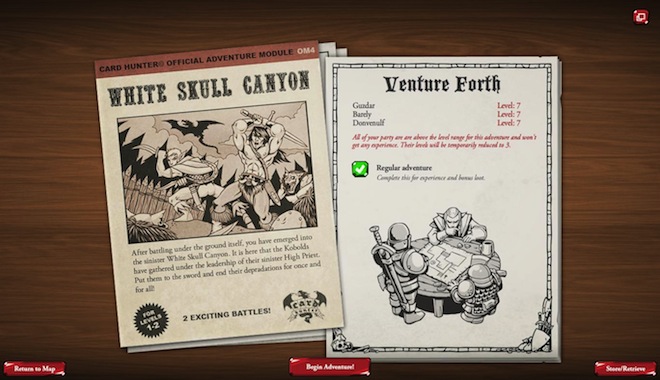 Above: The title of this module is a take on the classic D&D adventure White Plume Mountain.

Classic style
I adore the module covers of classic D&D. They have an iconic, if now cheesy style, and each part of Card Hunter’s campaign starts with a similar cover.

The character, item, enemy, and even map art captures the tabletop vibe. Each character looks like a cardboard cutout you might get from a 1980s game (picture Games Workshop’s Talisman). Dice and even the odd cheese puff or two sit around each map.

This is where Card Hunter is at its best: capturing the atmosphere of D&D co-creator Gary Gygax’s dungeon crawls. While you could role-play, the best of the old D&D modules all emphasize finding a dungeon, killing everything inside it, and gathering the loot.

Satisfying multiplayer
Card Hunter is the most enjoyable multiplayer game I’ve ever played.

You enter an arena against another player or the A.I. Each map has control points that you may capture to earn the victory (you may also win by slaughtering your foe). Some have one point, and others have three or four. Each arena has terrain that you must account for, and you’re on a timer — should it expire, whoever’s leading wins. Victories are important for more than your rank — each day, wins move you up a ladder for rewards that consist of choice gear.

At least during my time in multiplayer, I found the community to be a peach. I played dozens of matches, and I had just one not-so-bad run-in with another competitor — they were only asking that I play faster. Frequently, folk wished me luck at the start of matches. I hope this community spirit doesn’t change once Card Hunter launches.

The one bad thing about multiplayer before launch is that you can’t friend other players, just block them. 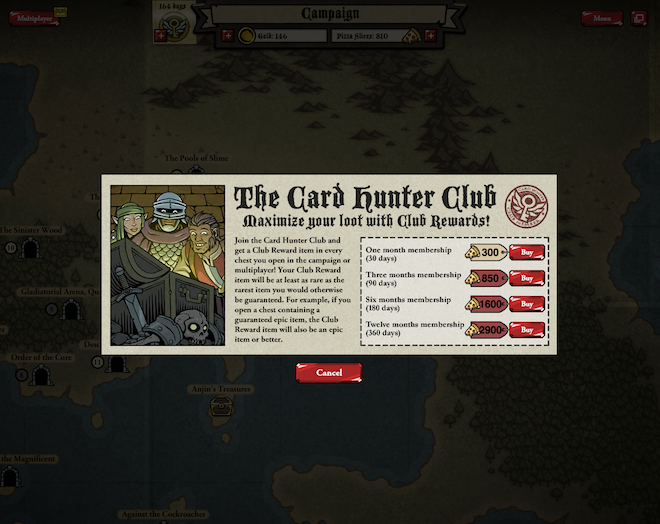 Above: Want to join The Card Hunter Club? It’s gonna cost you some pizza. (That’s the in-game currency you can buy.)

It’s free-to-play, but it really isn’t a free ride
Card Hunter is free-to-play, but I hit a point at which I spent money to get better gear to overcome one module — and this was after trying to acquire better items in multiplayer. I received a similar amount of in-game pizza currency from Blue Manchu as you would get from its Basic Edition pack (which costs $25). I purchased the special Treasure Hunt modules and joined The Card Hunter Club (both require pizza), which bags you an extra item when you collect loot after each victory.

Blue Manchu says that its debut game isn’t “play to win,” and maybe if I had spent more time grinding through the multiplayer ladder, I could’ve found better items to help me take down that troublesome module. But I found Card Hunter to be more enjoyable after I’d spent some pizza.

Some of the humor fails
Writing jokes is hard. Blue Manchu’s humor succeeds more often than it fails (such as using pizza as in-game currency or spouting the line, “You have at last defeated the Dark Lord of Condescension”). But when it goes south, the comedy tries too hard to riff off geek culture.

And I did not care for how at one point, a woman who delivers pizza from “Papa Manchu” loses her job because she’s playing Card Hunter with you. That part of the joke is fine, but the guy she’s playing with makes such a big deal about her being a girl. It’s 2013; we shouldn’t find it remarkable that a women wants to play a nerd game.

At first, I thought Card Hunter was fun but unremarkable. As I dived into it further, learned more about how things interact, and examined the tactics, I found one of my favorite games of 2013. I find the choices for how you equip your characters and how you compete in multiplayer to have long-lasting enjoyment, and I can’t wait until more people are playing and begin sharing player-generated levels.

And it’s even more remarkable that all of this exists in a browser-based game.

Card Hunter is a browser-based game that runs on PCs (Windows and Linux) and Macs that comes out Sept. 12. Publisher Blue Manchu provided beta-test access and $25 of in-game currency for the purpose of this review.