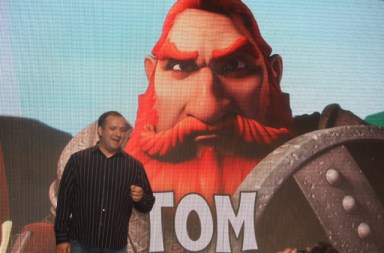 Amid a host other game announcements, Zynga unveiled its newest “Ville” game, CastleVille, at the Zynga Unleashed event this week. CastleVille certainly seems more ambitious than other games — it has better graphics than Zynga’s other titles and the soundtrack features a 75-person orchestra.

I got a chance to chat with Bill Jackson, creative director of CastleVille, to find out just how much work went into the game.

VB: Can you give me a sense of the scale? How big is this game compared to, say, CityVille?

BJ: There are three things we focus on with CastleVille. It’s the fourth installment in the Ville franchise, so we’re building upon the shoulders of giants. There are elements we each bring to the franchise, and we wanted them to sit there nicely with our own elements. We wanted to focus on exploration. We wanted to bring Story and narrative to the next level. That’s part of the push on production values in the game, because we need the characters to be engaging and rich and we spent a lot of time bringing them to life.

We first focused on taking social to a new level, the way we want to do that is not by forgetting the lessons from old games but improving on areas and providing new twists. something as simple as the reputation system, we’ve had that in a few Ville games, but in our game it also serves as a way to unlock rewards and it permeates the entire design.

VB: How big is the team that worked on CastleVille?

BJ: We aren’t disclosing how big Zynga Dallas is or the size of the CastleVille team. We start with a really small concept team, completely develop in that small team, and as we progress and create a much larger game, we add more people to the team.

VB: CastleVille certainly looks much better than other Zynga games, but will I be able to run it on a weaker computer?

BJ: One of the things we really focus on, and we say this a lot, is everyone should be able to play the game. When we test these games, particularly CastleVille which is beautiful, we test it on a wide variety of computers to make sure it’s stable. Not a lot of people notice or keep track of that.

VB: Can you tell me a little bit about the art direction behind the game?

BJ: We’re inspired by a lot of places, there’s a lot of traditional animation we’re inspired by in this game. DreamWorks has done Shrek — that was an inspiration for us. Part of it is also evolution of an art style that our art directors have been working on their entire lives. It’s progressing and progressing, we do different things, we’ve worked on some really serious stuff, but if you look you can see a progression toward this art style that’s really beautiful and we’re really proud of it.

VB: How long do you expect people to play CastleVille each day?

BJ: We talk a lot about the fifteen minute window where people have time for us, and it’s all about as much time as you have. There’s a corollary too, if you want to spend as much time with the game, we make sure that’s possible. It’s relaly up to the player. When we’re talking around the design table, we really care that it’s on your time, you can play it on your coffee break and it feels like a meal — not just a snack.

VB: Is the game any more complex than, say, CityVille? Or are you guys trying to keep it simple?

BJ: We work very hard to make sure the game is accessible, it comes back to the everyone comment. It’s accessible, building your castle is fun and rewarding. Building walls in this game is fantastic and fun and we want to make sure you can build it however you want. You can build hedge mazes or anything crazy like that, we just make sure it’s super simple and super accessible.