The Casual Connect game conference was a big affair this week in San Francisco, and it was a bellwether for the health of the game business. To me, it showed that the Golden Age of Gaming is still happening, but the industry is dividing into a small group of winners and a large group of losers. Survival in the game industry is a daily Darwinian struggle. Developers and publishers are always struggling against huge odds, and one of their worst enemies is the rising cost of user acquisition, or acquiring new players in games.

While many parts of the game industry are growing, and there were plenty of big parties to celebrate the good times, I saw some relative weakness of what was once the heart of the game business: San Francisco and greater Silicon Valley. The Bay Area has been home to pioneering companies throughout the history of gaming, including Atari and Electronic Arts. And while it still has a unique advantage as the nexus of technology innovation and gaming, it’s also clear that this region is going through a time of consolidation.

Carl Quinton, production director at Casual Connect, said that there were rumblings of weakness in the San Francisco games market, and so he said he was glad that the event was able to draw about 3,000 people, or the same number as attended the conference a year ago. By contrast, in places like Helsinki, Shanghai, and Israel, the game industry and the companies that serve it are on the rise. If one thing is clear from the rise of mobile gaming, it’s that North America is just one part of the global game business. It is no longer dominant.

In relative terms, the $70 billion industry is still having a banner year, even if the pace of deals and game investments has slowed down, said Eric Goldberg, managing director at Crossover Technologies. I don’t want to rain on this parade too much. There are hundreds of companies advertising game jobs in the San Francisco Bay Area. But I do think it’s prudent for game entrepreneurs to realize that there could very well be a flood coming, and it will wash away the weak.

“Even with mobile games revenue set to grow from $29 billion in 2015 to $45 billion by 2018 at 15 percent annual growth, stable top grossing charts are set to continue,” said Tim Merel, managing director of San Francisco-based tech advisor Digi-Capital. “This is great for games leaders and their shareholders, but is putting the big squeeze on mid-tier players and makes breaking through more challenging for indies.” 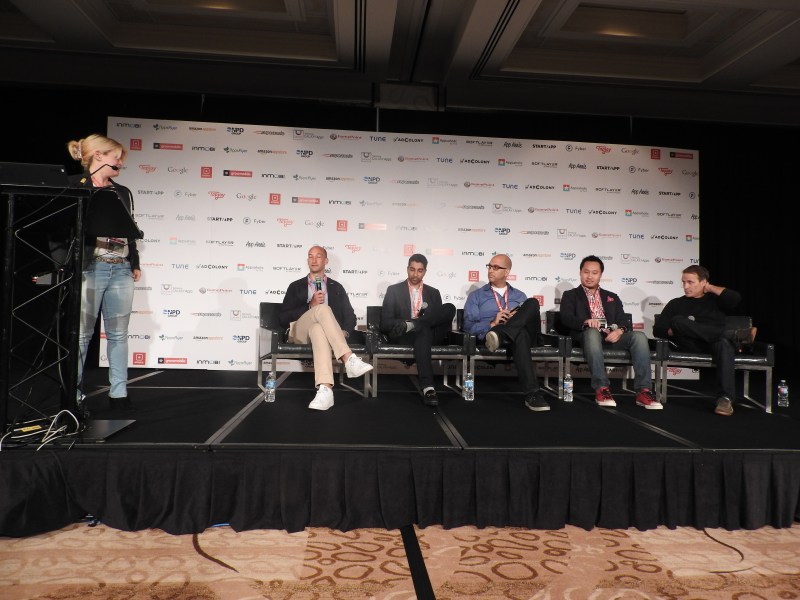 Above: This panel, moderated by AJ Glasser of Facebook (left), was bullish on brands.

Investments in games were down 45 percent in the first half of the year, according to market advisor Digi-Capital, and overall deals were off 89 percent in the first half. On the other hand, 2014 was a gigantic year in gaming, with $24 billion in mergers and acquisitions as well as record investments. Given the level of M&A, there isn’t enough investment in games. So the companies who are raising money shouldn’t expect that the money will always be there for the next investment round.

“The trend of games deals falling 89 percent by value in the first half of the year is continuing, and 2015 looks set to remain a buyers’ market without some sort of catalyst,” Merel said. “AR/VR provides the one bright spot for market growth, and could begin to turn things around in 2016.”

For sure, the Chinese may come to the rescue as they expand out of China and become global game companies. They want to invest and acquire. But their stock market is in a state of gloom right now, and the Chinese game companies have lost a lot of value. They might very well pull back on investments, and that would let the air out of the bubble.

The San Francisco/Silicon Valley region has strong companies such as Machine Zone (maker of Game of War: Fire Age), Kabam (which is expanding overseas), Glu Mobile, and a resurgent EA. But the region has also seen significant layoffs at companies such as Kixeye, Gree International, DeNA West, and Zynga. The latter companies have had a hard time making the transition to mobile games, and they’re having a tough time challenging the top three: Supercell, King, and Machine Zone. Those winning companies can afford to advertise as much as they want to get users, and they should be able to do it profitably as long as they keep a good handle on their advertising costs and revenues.

Sunny Dhillon, partner at Signia Venture Partners, argued that mobile has become too hard for startups to penetrate because of the lock the top companies have on user acquisition, which can climb past $10 per user in the most competitive advertising. It’s harder and harder to stand out among 3 million apps on Google Play and iOS, and there’s a flood of branded and licensed games coming in the hope that celebrities will help the games stand out.

Most companies, entrepreneurs, and developers aren’t just sitting still. They’re dealing with the change. Dhillon said that he’s starting to look closely at virtual reality and esports. Other investors at the event also said they’re looking at investing in VR. Lots of veteran game developers have been drawn to the siren song of virtual reality and its cousin augmented reality.

But since no one has launched a mass market VR device yet, there’s no market for the apps yet.

“If the content creators can’t make money, they aren’t going to devote their time to this medium,” said Alex Taussig, general partner at Highland Capital, speaking on an investing in VR panel at Casual Connect. Jeff Watson, partner at Boost VC, added, “We guide our teams to not die. We want them to survive until there are customers.”

In other words, VR isn’t going to immediately save all of the companies that could falter. 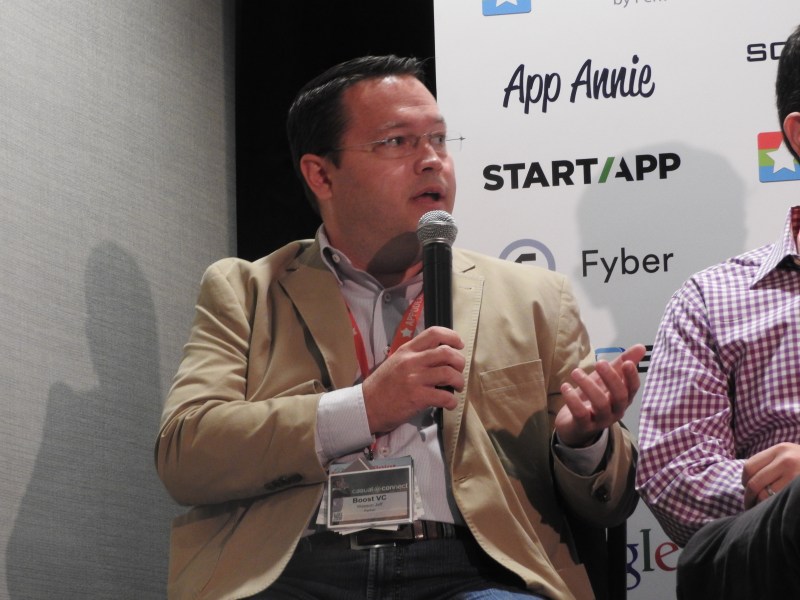 Above: Jeff Watson of Boost VC

Mark Robinson, chief executive of DeltaDNA, said in an interview that the alternative to spending on user acquisition is retention. If you learn how to hang on to the players that you already have, that can have a huge impact. That means developers have to use tools that enable them to understand their players and target incentives at them so that they feel appreciated and stick around.

“It’s the obvious next step,” Robinson said. “There’s far too many games that don’t make money. For more people to make money, we need to make games profitable at just 500,000 users. To do that, you have to engage the players, get them to stay longer, and find other ways to monetize them.”

Another way to deal with rising marketing costs is by improving your chances for organic adoption. I moderated a panel on app store optimization, or improving the chances that a player will find your game through an app store search. My panelists from Playtika, Yellowhead, The ASO Project, and Sensor Tower argued that optimizing is a great way to get free organic installs and lower your company’s overall cost of user acquisition.

It takes a lot of ingenuity to pursue these alternatives. But it’s important to know how effective your alternative is. You can’t spend your time filling sandbags in order to ward off the rising tides from global warming. I’ve brought up a few alternatives to facing the grim reality of the costs of user acquisition, but the scale of these alternatives just isn’t massive enough to prevent the mass extinction of the weak.

To deal with the forces of Darwinism, you’ve got to invest in floating cities. To carry this analogy home, if game companies really want to deal with the pressures of consolidation and rising costs of user acquisition, they have to do it by creating blockbuster games or innovative technologies that change the game, disrupt the status quo, and create new markets and new audiences that will last for years to come.

Michael Eisner, former CEO of Disney and now chairman of sports card maker Topps, said in his talk that the secret to survival in the world of entertainment is to come up with a great idea and pour everything you’ve got into making the idea into a reality. He also believes that content is king, not the media that carries that content.

I’m not worried about San Francisco or Silicon Valley, where the tech boom is still going strong and new game companies are always being formed. The platform companies that support gaming — Google, Facebook (and its Oculus VR division), and Apple — are based in the region, and they’re always a magnet for other game companies. But the people here shouldn’t be complacent either. It’s a daily Darwinian battle, and you have to earn you place in the game business every day. 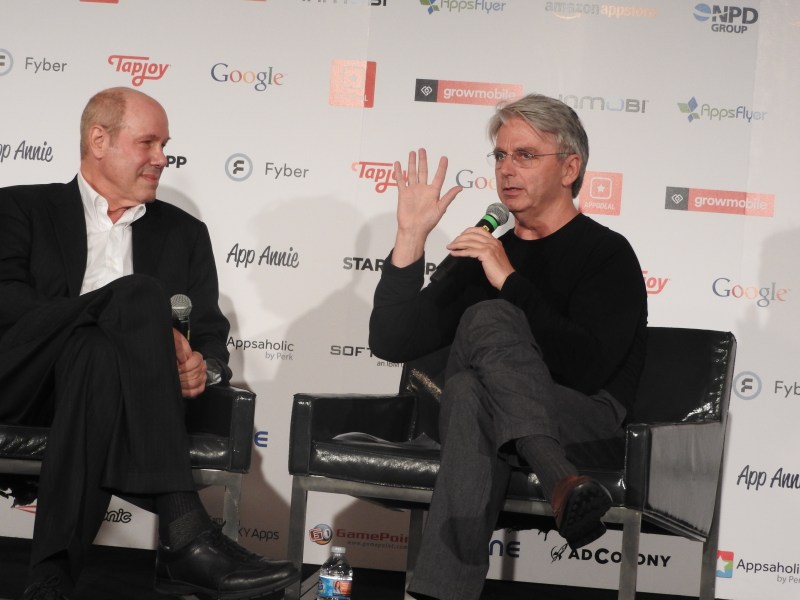 Above: Michael Eisner, chairman of Topps and former head of Disney, with John Riccitiello of Unity Technologies.