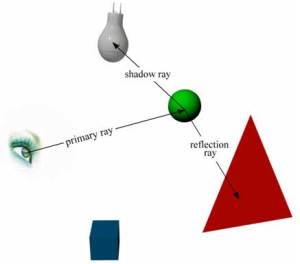 Caustic Graphics is planning to take on graphics chip makers with a new method for rendering images that can enhance realism and improve cost efficiency.

The San Francisco startup, founded by ex-Apple engineers, uses ray-tracing, a technique that has been proven in animated films but remains the subject of intense debate among graphics experts. The Wall Street Journal reported the story today. Caustic Graphics promises far more realistic 3-D graphics than are currently possible.

With ray-tracing, a graphic-heavy program like a game draws 3-D images by shooting rays outward from a certain point in a 3-D image. If the ray actually hits something, like a tree, the graphics program doesn’t waste any time creating the scenery behind the tree because it is hidden from view. 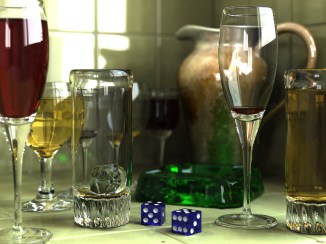 Intel has been touting ray-tracing for years now, but many experts say that’s only a marketing pitch. Ray-tracing is more easily executed by a microprocessor with a large amount of cache memory, than on a traditional graphics chip. Graphics chips usually employ something called rasterization, which renders everything in a scene in one pass, and then adds layers of detail like shadows or lighting in subsequent passes.

It remains to be seen if ray-tracing is the best way to capture complex images like the one to the right. It has been tough to adopt because microprocessors haven’t been powerful enough. But computers are getting faster, and some say that ray-tracing’s time has come. Others, like Nvidia and Advanced Micro Devices — the graphics chip vendors who use rasterization — say that it makes sense to use a hybrid of ray-tracing and rasterization. Nvidia bought its own ray-tracing firm, RayScale, last year.

Caustic Graphics, one of the first new graphics startups in a long time, will likely challenge that view with its own approach. The company says it has software and hardware that can speed up ray-tracing by 20-fold over today’s PC hardware. It claims it will launch chips by 2010 that will be 200 times faster.

The company was founded by James McCombe, 26, of Northern Ireland. It has 35 employees and has raised $11 million. That’s not much, considering that it is competing with multi-billion-dollar rivals. Caustic plans on targeting architects, engineers and animators first. Then it will focus on entertainment applications on PCs and game consoles.