Every December, millions of people break out their favorite holiday films, music, and television specials as part of their annual holiday traditions. My family, for example, always watches National Lampoon’s Christmas Vacation, and I love the 400,000 times that I hear Mariah Carey’s “All I Want for Christmas is You” when I’m shopping for presents.

Unfortunately, games frequently are left out of these types of activities. You don’t hear stories of families gathering around the PC to play their favorite holiday game. That does not mean, however, that gaming is devoid of the holiday spirit.

In fact, games of all sizes proudly display their Christmas cheer. To help you possibly find a new holiday gaming tradition, we’ve gathered up a list of some modern games that feature Santa-related content as well as a few old favorites, so don your ugliest sweater and prepare to get merry:

Outside of games, some of the best holiday specials often feature characters that are already popular. In A Charlie Brown Christmas, we get to see how the characters from the Peanuts comics spend the holidays, and that’s the kind of experience we get from the following games. 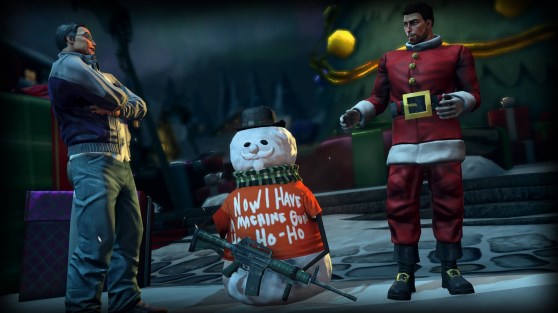 Above: The President and his crew have to work with Christmas characters to save the holidays.

In this expansion to the open-world crime game, Santa gets trapped in the virtual prison that players had to escape in the main storyline. It’s up to the President (the player’s character) to go in and rescue jolly ol’ St. Nick. The only problem is that the Commander in Chief is a bit of a Grinch. That means it’s up to the rest of the rest of Saints gang to teach the player the true meaning of Christmas.

Naturally, the expansion features reindeer and Santa’s sleigh, and you can ride them both. 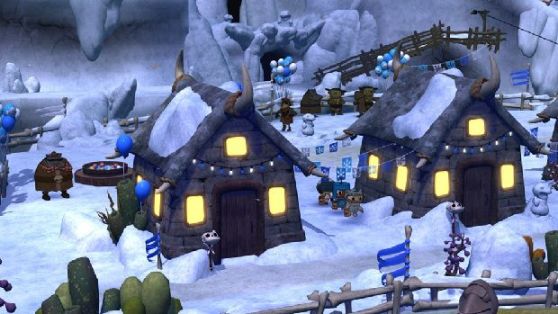 Above: The Christmastime expansion to Costume Quest.

Developer Double Fine first released Costume Quest in October 2010 as a Halloween-themed role-playing game. That original adventure makes for an excellent special to play annually during the trick-or-treating season, but Double Fine later went on to release an expansion set on Christmas day. Grubbins On Ice has the costumed heroes from the main quest traveling to Repugia, the home of the monsters that invaded the kids’ sleepy suburb.

The characters once again have to save their kidnapped friend while also learning a bit about how the monsters live and celebrate their holidays. 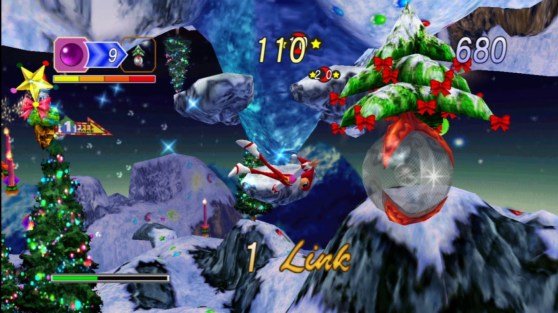 Above: The Christmas special of Nights Into Dreams for Sega Saturn.

Sega originally released its side-scrolling flight game Nights Into Dreams in 1996 for its Saturn console. That game has a pair of kids going on adventures in their dreams with a character named Nights.

During the holidays, Nights Into Dreams uses the Saturn’s internal clock to turn the standard game into Christmas Nights. This special version follows the children from the main game as they head back to the dream world to find the star that is missing from the top of their tree. This time, Nightopia is overrun with presents, tinsel, and holiday lights. 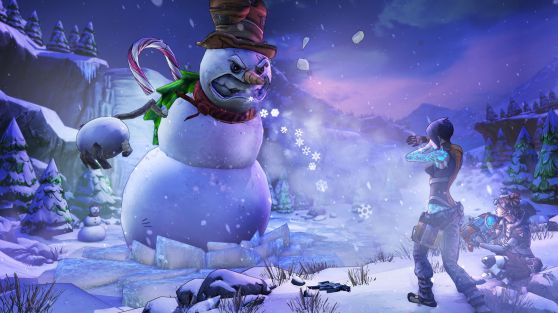 Above: Must’ve been some magic in that old silk hat they found.

Developer Gearbox Software released a holiday expansion for Borderlands 2 earlier this week. In How Marcus Saved Mercenary Day, players must head to a snowy holiday-themed land called Gingerton. This cheerful village is brimming with ugly Christmas sweaters and jingle-singing carolers, and it is also home to a giant snowman named Mister Tinder Snowflake.

Sometimes, developers of massively multiplayer online games decide to change the whole look of their products to reflect the most wonderful time of the year. It’s a common practice that is starting to spread into mobile and other online games. Here are a few that are running events this year:

Each year, Guild Wars 2 developer ArenaNet holds a Christmas-themed event that it calls Wintersday. This year, the event began on Dec. 10 and runs through the end of the month.

Valve’s free-to-play Dota 2 joined in on the holiday spirit on Dec. 12 with its Frostivus event. During the month of December, players can play a winter wonderland-like co-op mode called Wraith-Night that has five players teaming up to take on waves of enemies. Pretty sure that’s the meaning of Christmas right there. 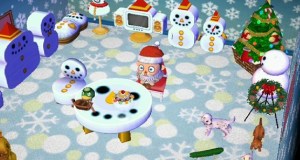 Above: Celebrate the holidays surrounded by a bunch of creepy snowmen.

On Dec. 24, a reindeer dressed up as Santa visits villages in Nintendo’s Animal Crossing social sim for Toy Day. Jingle, as the reindeer is known, gives the player presents from his special line of holly jolly decorations and furniture items.

Every year in developer Trion Worlds‘ Rift MMO, players get to celebrate Fae Yule. This celebration involves decorated wreathes, a layer of snow on the ground, and special gifts.

Mobile developer DeNA is holding a pair of events in December for its class-based strategy game Defender of Texel. Now through Christmas Eve, players can go on a quest to siege a castle … only this time, instead of a stone fort, players are actually attacking a giant Christmas tree. After that event ends on Dec. 24, players may then participate in the Roam for the Holidays event that has Santa Claus invading the world to find his missing wife.

As always, Blizzard is holding its annual Feast of the Winter Veil now through the beginning of 2014. Players can head to the bazaars to pick up seasonal goodies like candy canes, winter ale, and gingerbread cookies. You can also pick up some mistletoe to help you finally kiss that night elf druid you’ve had your eyes on.

Sony‘s create-a-game platformer hybrid has plenty of downloadable content. That includes a Santa costume and tons of items based on The Nightmare Before Christmas. 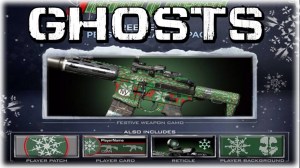 Above: Some of the Christmas items from Call of Duty: Ghosts.

Call of Duty developer Infinity Ward knows what this time of year is all about: presents. The studio recently released a free pack of Christmas-themed items that includes an ugly-sweater skin for your weapons.

Valve’s online shooter got a Christmas makeover. The studio put up holiday lights around some of the levels, and players can run around while wearing Santa hats.