David Helgason has grown up with indie-game developers by providing tools like the Unity 5 engine for building cross-platform games. As mobile exploded, so did Unity, which can be used to publish games across Android, iOS, PC, Facebook, the web, and next-generation consoles.

But Helgason, the chief executive of Unity Technologies, doesn’t like to see game developers die. So the San Francisco-based company has expanded into providing services for game discovery, predictive analytics, and monetization. And it has a growing asset store, where game developers can sell their own tools and art components for others to use in their games. The idea is to equip developers for survival in a world where there are a million competitors. At the same time, Unity is beefing up the quality of its 3D animation tools so that it can compete with high-end rivals Unreal and Crytek. That’s going to make mobile games look much better — World of Warcraft publisher Blizzard used Unity to bring its popular and successful card battler Hearthstone to iPad — and hopefully broaden the selection of games in the $16 billion mobile game business.

I interviewed Helgason onstage at the Mobile Gaming USA event in San Francisco this week. Here’s an edited transcript of our talk.

GamesBeat: You started in 2004. For our crowd here, why don’t you bring us up to date on how large Unity has become? 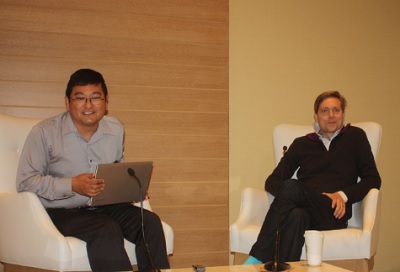 Above: Dean Takahashi and David Helgason at Mobile Gaming USA.

David Helgason: Sure. Actually, code was written as early as 2001 and 2002. But we formed the company in 2004, when I had been part of a group for about a year. We launched Unity 1.0, our game engine and development platform—originally it wasn’t for mobile games, because mobile was kind of shitty back in 2005. I was going to say it didn’t exist, but that’s not true. In fact, I’d worked for Nokia before this.

But we launched as a Mac/PC/web development platform, and then when iOS opened up in 2008, we were bizarrely enough not just first there, but we were by far the first. Nobody else was doing tools for iOS development until, as far as I can tell, 2010 or something? Which is why when Android came out with the native SDK, we went there as the first development platform as well.

We’re not originally a mobile platform, but we wrote that very fast. It’s benefited the ecosystem, obviously, as we well know. It’s grown at some ridiculous, historically very rare rates. We’ve been able to follow that.

There are all kinds of ways to measure our business. We have a tool that can develop for pretty much every platform that matters, and some that don’t matter to everyone. In the last month, 630,000 developers used our platform to develop for something like 9 million hours.

Helgason: Yeah. We’ve doubled in a year and a half, maybe? I can’t remember exactly when things happen. We can’t really keep track of the number of games, but we know it’s at least 10,000. We think it’s a lot more. There are some really good games and a lot of bad games. People-wise, we’re over 400 now, globally. It’s a pretty fantastic ecosystem.

GamesBeat: Did you start out thinking about indie developers? Was that a happy accident along the way?

Helgason: The not-so-often-told story is we started out as indie developers. We were going to make our own games, but there was no tool like Unity out there, so we had to make it for ourselves. Then we realized we weren’t great game developers. We weren’t the worst, but we were pretty mediocre. But we’d created tools for ourselves that were unusual in quality and polish. We decided that we’d be a tools company rather than a game company.

It was very natural for us to pick a price point that we felt was realistic and go out with a product that would be available for pretty much everyone. We started with a $200 price point and higher pro price point. A few years later we realized that while $200 isn’t a lot in our part of the world — we had kids mowing a lot of lawns to buy Unity – at some point we went free as well, because the rest of the world was really important.

We never said we were an indie engine. We just wanted to support everyone, including the indies. We always felt that we should push ourselves hard to make tools that were for everyone, rather than the biggest companies. We’ve achieved that. Most of the big companies use our software on some level. Part of it is just that we believe the indies deserve really professional tools. 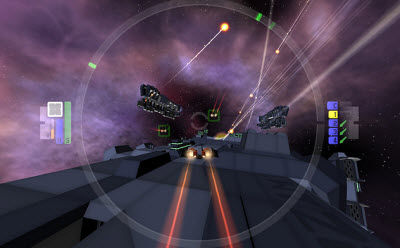 GamesBeat: I’m sure everyone knows you’ve grown fast in this sector, and that you’re very important now. But maybe they don’t know exactly how you make money, what your business actually is.

Helgason: It’s pretty old-fashioned. My father’s now over 80. He once said a few years ago, “You know, your company is quite old-fashioned. You make a product and you sell it to people who use it.” It’s a tool and the people who use the tool buy it. We sell it on a purchasing basis. That’s the bulk of the revenue.

GamesBeat: On a premium level?

Helgason: Yeah. EA and some of the big companies buy a lot of it, so they get some sort of enterprise deals. We’ve announced a few of those, but there are many others that aren’t big enough to talk about.

However, we’ve been thinking about how to broaden our support for the developer ecosystem. One thing we came up with a few years ago is this asset store, where developers can trade amongst each other. If somebody’s created a script to achieve a particular purpose, they can sell it for whatever dollars. Often they’re in the $0-$100 range. It ends up being a pretty big marketplace. We take a 30 percent cut, which covers the cost of running it. It’s profitable, but not wildly so.

One way to slice it is, on a run rate basis there are six million packages — assets, scripts, particle systems, animation clips – being downloaded from the store on a yearly basis. Many of them free, also many of them sold. Some of these things will take a professional between one and a few days to make. Some will take upwards of two weeks. If you just add up a day of saved work per downloaded asset, going by a $50,000 fully loaded global salary, which I think is quite useful as a metric, it’s very hard to get under a billion dollars of saved work for the industry. That’s pretty wild. That’s much more important than the revenue for us, which is just cost-plus at this point.

GamesBeat: Are you at some point going to talk about how much downloading is going on there, how many units of these things are coming from the asset store?

GamesBeat: That seems like it’s going to have some decent upside. It may be a more important business, at some point, than the rest of your business, selling licenses.

Helgason: Maybe? It’s not, at this point. It’s a low net margin business. When we sell a license of Unity Pro, we keep 90-something percent of that as our margin. When somebody sells a $100 package, we keep $30 from the store. It’s very different. 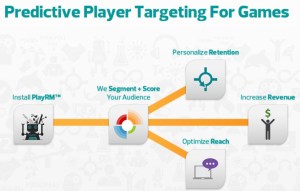 GamesBeat: And you have services now. You acquired Applifier, and I think somebody else, too?

Helgason: Yeah, Playnomics. It’s a business, but more important, we started the company asking the question, “How can we help developers of all sorts, from the biggest to the smallest, make great games?” Then we got that back and we realized that there are two questions that developers live and die by. The first is, “Can I make a great game?” There are lots of sub-questions about the right platform, the right features, performance, cost efficiency, production, all these things, and we worked hard on that for 12-ish years. But they also live and die by another big question, which is, “Once I create a great game, can I connect that game with an audience?”

One is, we acquired an ad network, GameAds, which we’re working on making bigger now. It’s already quite big, but it’s growing fast. You sell traffic or buy traffic. We care, probably, as much about the sell side. Small developers with high-traffic apps that don’t monetize very well as the buy side, we’re driving traffic to their games.

There’s also Everyplay, which is a game replay sharing network. As you’re playing a game, when something great happens in the game, there’s a button where you can push a video up to YouTube or Facebook. It’s one of these things that performs very well for developers already, but we wanted to make it much bigger and better-integrated.