Pearl Abyss, the maker of Black Desert Online, has agreed to buy Eve Online maker CCP for $425 million. The move is a big expansion into the West for the South Korean maker of online role-playing games.

The acquisition of Iceland-based CCP sheds light on Pearl Abyss, which isn’t well known on a global scale yet has more than 9.5 million registered players for Black Desert Online, many of whom have surged back since the launch of the MMORPG’s Remastered campaign in late August.

The deal shows the massive capital advantage that Asian game companies have when it comes to acquisitions, as their big online gaming player bases and confident investors enable them to amass a lot of money to acquire Western game companies.

But Pearl Abyss CEO Robin Jung said in an email interview with GamesBeat that CCP’s dedicated fans have nothing to worry about. No changes are coming at CCP and in its flagship game. The deal closes October 12, but Jung, 38, answered a variety of our questions related to the deal.

GamesBeat: What’s Pearl Abyss’s history? When was it founded? How many employees does it have? What is its annual revenues?

Robin Jung: Pearl Abyss was founded in 2010 by our current chairman and development director, Daeil Kim, who is behind the creation of the open-world MMORPG Black Desert Online. After an open beta test in 2014, Black Desert Online launched the following year in Korea, Japan, and Russia, followed by North America and Europe in 2016. Today, more than 10 million users in 150 countries play the game in 12 different languages.

We have also evolved as a game development studio and publisher, with more than 500 employees across the globe. In 2017, our annual revenue totaled $105.7 million, up 90.26 percent from a year earlier, and following the Korean launch of Black Desert Mobile earlier this year, we achieved record-high sales of $169.6 million in the first half of 2018, a 190 percent increase from a year earlier. Going forward, we hope to see further growth with the addition of competitive IPs, such as Eve Online, the upcoming global launch of Black Desert Mobile, and other new projects that are currently under development.

GamesBeat: Why do you want to acquire CCP?

Jung: The video games industry is becoming more competitive over obtaining strong IPs. We knew that in order to continue growing, we would need more IPs than Black Desert alone, and that’s why we made the decision to take the company public and raise additional capital to acquire promising IP and talent.

CCP Games was founded in 1997 and is best known as the developer and publisher of the hit spaceship [massively multiplayer online role-playing game] MMORPG Eve Online. We found the company appealing for many reasons, one of them being that Eve Online is a long-running MMORPG with a strong core player base, much like Black Desert Online. I feel that we share common DNA as game developers who create top-quality MMOs, and together will be able to build upon our strengths to take us to the next level.

Moreover, the global trend of the video games industry is to expand beyond PCs into mobile and console platforms. Cross-platform games are already the norm in Asia, and North America and Europe are following on the same path. Based on these market trends, we became certain of the future growth potential of competitive IPs, and thus made the decision to acquire CCP’s Eve Universe.

GamesBeat: What is attractive about it? Is it the online games like Eve Online or its experimentation with VR, for example?

Jung: CCP’s greatest strength is undoubtedly Eve Online. We know it’s not easy to develop a hit game and maintain it for over 15 years, but CCP has done just that and continues to excel.

We are also impressed by how CCP continually takes on new, experimental projects such as VR games, as well as the company’s culture that encourages development of the highest quality games.

Finally, CCP has done an incredible job of engaging and maintaining its community of players, which we will learn a lot from and hope to integrate natively into Pearl Abyss’ general practices across all of our games moving forward. 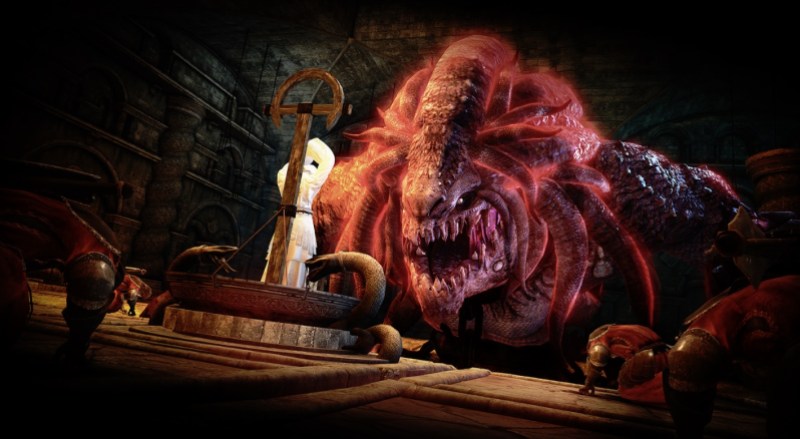 GamesBeat: How many employees are you picking up with CCP? Will there be any layoffs?

Jung: CCP Games will operate as an independent studio. We currently have no plans to restructure the company in any way.

GamesBeat: How will the two companies work together?

Jung: As of right now, CCP Games will operate independently as a development studio. We plan to communicate over time how both companies will be managed as we find efficiencies and determine what works best for everyone. In the long run, we are considering the joint development of new games.

GamesBeat: What’s your vision for the future of CCP?

Jung: First, we plan to support the long-running success of Eve Online and maintain its position as one of the leading sci-fi IPs in the world. We also hope to further our market growth with Eve Online, plans for which we’re not yet ready to announce. Down the line, we are looking to integrate CCP’s extensive development and publishing know-how into the creation of our pipeline of original IP.

GamesBeat: How will CCP’s publishing staff work with Pearl Abyss’?

Jung: Our current plan is to have CCP continue operating independently from Pearl Abyss, but our aim is to open lines of communication between the two teams that will have us learning from each other. At some point in the future, our hope is to more closely align the teams to capitalize on each other’s strengths and successfully collaborate to take our games to new players around the world.

GamesBeat: Why do you think that Black Desert Online has done so well?

Jung: I think Black Desert Online has been successful for a number of reasons, but mainly due to the quality of the IP as well as the direction we’ve chosen to take as a company.

Back in 2010 when Daeil founded Pearl Abyss, the goal was to make the best MMORPG available that anyone can enjoy. As a result, the game’s content is expansive, from action-based combat and raids to free-roaming and exploration, and our players have built a life in the open world of Black Desert. That’s why we have such a diverse group of core players. The game has also received critical acclaim for the quality of its graphics and hyper-customization system in particular, which are major factors towards the game’s lifelike and immersive nature.

Not only that, we devote a great deal of manpower and resources to bringing players fast and frequent updates. 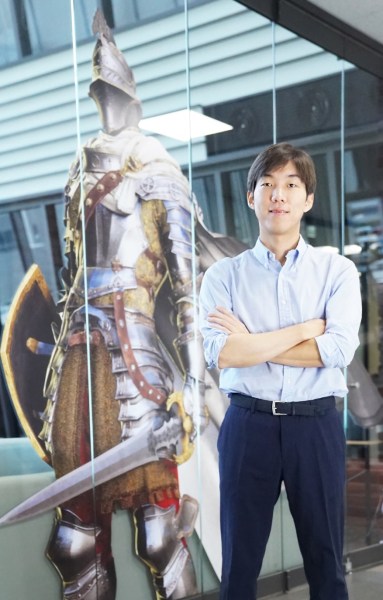 Above: Robin Jung next to a poster of Black Desert Online.

GamesBeat: Does it share some characteristics with EVE Online, or are the games very different?

Jung: Eve Online and Black Desert Online share many of the same characteristics, and that’s one of the reasons why we became interested in CCP in the first place.

The two are open-world MMORPGs that boast extraordinarily extensive content with non-linear storylines, critical to the long-running success of both IPs. Both games are also very community oriented, centering around a group of long-time players.

CCP and Pearl Abyss also approach the development and maintenance of our games with a similar mindset. Our teams are never satisfied, we’re obsessed with constantly pushing the envelope and taking on new challenges.

GamesBeat: Have you already learned some insights from the Eve Online team that could be useful in Black Desert Online? If so, what’s an example?

Jung: For both Black Desert Online and Eve Online, strong player community is key to the game’s long running success. I believe CCP has been doing a great job at communicating with Eve players, listening to them, and even trying to work together with them to deliver the best experience in the game.

I visited the Eve Fanfest this year for its 15-year anniversary, which I heard was one of the largest Fanfests the company has ever experienced. I witnessed firsthand the passion of the Eve community and how CCP engages their players to make a better game. It was impressive, and something we aim to learn a great deal from. 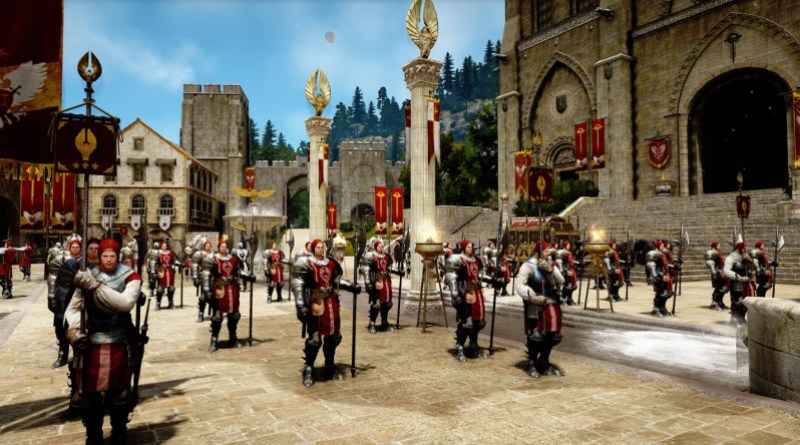 GamesBeat: Black Desert Online Remastered has done well. What explains how well it has done at getting players to return and attract new players?

Jung: Black Desert: Remastered is really an extension of what our team does every day — to continue improving what we built yesterday. The remaster honed in on the game’s graphics and audio to give players an even more immersive and lifelike experience.

For the graphics, it was all about applying the latest technologies and methods to emulate what the naked eye sees in real life, in terms of lighting, shadows, expressing textures and more. We added and upgraded the majority of our graphics with new techniques, such as physically based rendering, advanced post-processing, image-based lighting, etc.

The audio team was given a lot of autonomy to experiment with new sounds and apply a whole new depth to the game. Our audio director, Hwiman “Croove” Ryu, wrote 100 original songs, just for the remaster, and worked with renowned orchestras from all over the world. What resulted from the long-term project are impressive, standalone soundtracks that I believe many — not only gamers — will appreciate.