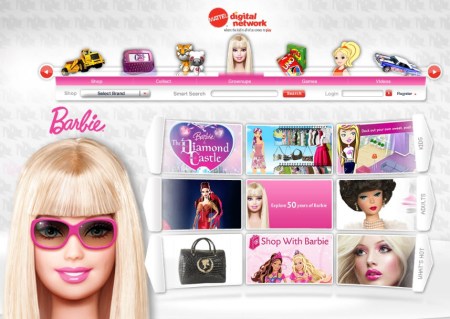 Digital toys and web sites for kids have had a mixed history. But the future is so full of techno-savvy kids that toy makers are finding they have no choice but to move into the digital realm by providing better online entertainment as well as digital toys in the physical world.

Mattel is going to do that by making its first full-scale appearance on the show floor of the International Consumer Electronics Show, which features a Kids@Play Summit this week in Las Vegas. Among the moves Mattel is announcing is a complete revamping of its online strategy, which will now target everyone from small kids to adults to bring out the “kid in all of us.”

In the past, the company used its web sites to promote its brands. Now it’s going to provide a lot of interactive games and content on the sites in an initiative dubbed the Mattel Digital Network. The network is a portal into a bunch of games with open-ended play. The site is named not only at the youngest kids but also at adults who are fans of the Barbie, Hot Wheels, Matchbox and Radica brands. 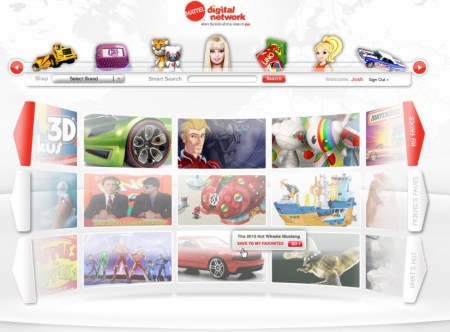 Mattel is beefing up its efforts because technology is in almost every household now, said Chuck Scothon, general manager and vice president of Digital Media Mattel. He said, “While adults view this as technology, kids don’t. They just see it as another way to play.”

Previously, Mattel operated brand-centric web sites, such as the BarbieGirls.com virtual world or the Hot Wheels site, which has been around since 1995. The sites have games and activities for kids and are typically in the top five brand sites on the Internet. Now the company is trying to broaden beyond that, focusing on experiences for everyone from five-year-olds to 21-year-olds. The play experience for the new Mattel Digital Network will have sections that target specific age groups, genders, interest levels and time available. 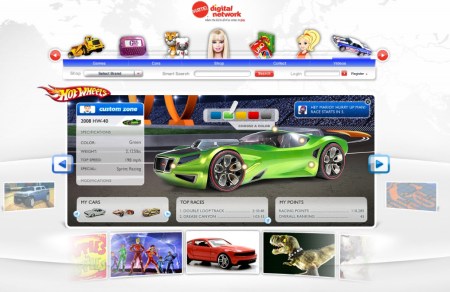 In 2009, for instance, Barbie will celebrate her 50th birthday. Mattel will launch marketing programs targeted at adults and their memories of playing with Barbie dolls, and many of those programs will play out online. A lot of user-generated content will be involved in those promotions.

El Segundo, Calif.-based Mattel has a lot of tough competition, since it has one set of competitors in the toy market and another set in the digital realm. The others have been successful in a variety of ways. Lego has done well with Lego brick-themed video games, and Disney is tripling its investments in video games over time.

Mattel has stumbled in the past. In 2006, the company launched a low-cost game console, HyperScan, targeted at boys 12 years and under. But the company scrapped that console after it was trounced in the market by the Nintendo Wii and other consoles. Scothon said the lesson from that experience was to know when to do things internally and when to partner with someone externally.

Scothon says Mattel will bring its experience of play and adapt it to the digital market. It will do that on its own as well as with partners.

At the show, Mattel will highlight eight products:

• Mind Flex — a mental acuity game that uses a lightweight headset with sensors to measure alpha and theta brain activity. Players move a small foam ball in the air. If they concentrate, the ball rises; if they relax, the ball falls.

• Barbie Digital Nail Printer — You can print custom designs directly onto your fingernails.

• UCreate — With a UCreate tablet and software, kids can draw their own shapes and create a game around them.

• UMix — Music fans can create their own musical mashups with MP3 music.

• XTRACTAURS — The dinosaur toys let kids fight online. You can connect a “DNA extractor to a dinosaur and then connect it to a computer to unlock an online experience.

• U.B. FUNKEYS Game Factory Tool — Lets kids create their own Funkeys game to go with their U.B. Funkeys physical toy characters. They can post the designs to UBFunkeys.com where kids can vote on the best creations.