I’m on a train in the dead of night. The windows are closed in all of the compartments, locked and shuttered. I have to open them.

Horror games can make us afraid of opening doors, but shutters on train windows? That’s unique to Charnel House Trilogy, a PC adventure from developer Owl Cave Games and publisher Mastertronic that scares players with the lights on.

“Really, the biggest challenge is making sure you find things that actually frighten people,” Ashton Raze, the writer and director on Charnel House, told GamesBeat by email. “Most people are going to jump when they’re greeted with a loud sound or a sudden unexpected image; it’s not too hard to trigger an instant response from people with audio-visual stimuli. Here, I had to find things that could get under people’s skin, make them uneasy and unsettled without resorting to the more obvious options.

“It’s hard to create extremely visual horror or jump scares in a 2D pixel art adventure game. In the end, I decided to focus on things like loss, loneliness, betrayal, and huge bags filled with worms — everyday, relatable terrors. Most people are afraid of things like that.” 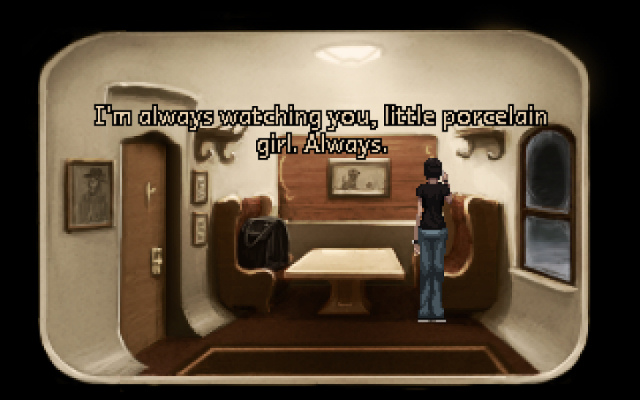 Above: One of the totally not normal phone calls that Alex receives in Charnel House.

One train, no escape

Unfolding in three chapters (“Inhale,” “Sepulchre,” and “Exhale”), Charnel House Trilogy follows two characters onboard a train headed for the island of Augur Peak. They’re going there for similar reasons (turns out they know each other), but their stories are distinct and personal. They focus on real problems. Getting inside these characters’ heads — and the minds of people they know — is half the horror.

The young woman, Alex Davenport, is recovering from a bad breakup and creepy stalker phone calls, and Dr. Harold Lang, a museum curator, is a drunk with memory problems. Exactly what he can’t remember is your guess as well as his.

The other main scare? The haunted train, of course.

“I wanted to create a one-room, one-character game where the entire story was told via the protagonist’s mannerisms, observations, and quips,” Raze said. “Obviously, it changed and evolved somewhat … . CHT serves as a prologue to a larger game in which characters and their roles are incredibly important. It’s a plot about people being ascribed certain roles in life and fulfilling — or rebelling against — them, so designing the setup to be heavily character-driven made a lot of sense.” 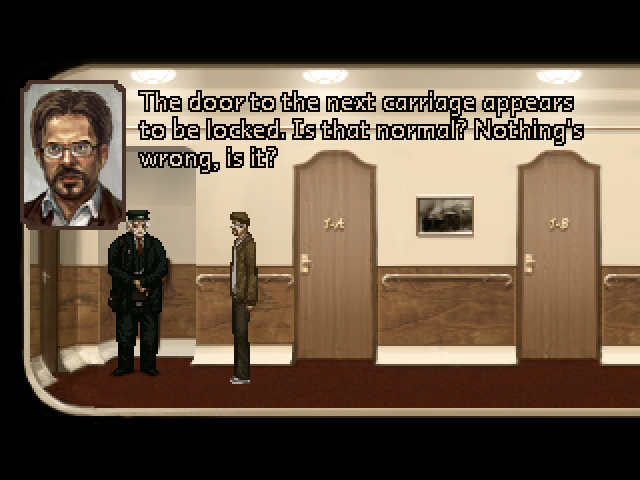 Above: Lang deals with the train’s weirdness in a much different way than Alex, who is prone to heavy swearing.

Raze’s specialty is prose fiction, and she turned to video games as means for interactive storytelling. Charnel House began over 18 months ago with Sepulchre, a standalone release that’s now the trilogy’s middle chapter. Before Charnel House, her short story “Bad Company” in her collection Bright Lights & Glass Houses took place on a train as well. Both are free.

“Going down the ‘usual’ route just didn’t appeal to me hugely,” Raze said. “There are still some great stories being told in archetypal horror settings. But for me, a big draw of writing horror is playing on the unknown or unexpected. Writing a story set in a fairly expected horror location removes one of the ways in which I get to do that, so I try to avoid it.”

The train setting works well for mysteries and thrillers. “They’re wonderful closed-circle locations. You can’t escape no matter what, as long as the train is running, and there’s theoretically a limited character set as to who should be on the train,” Raze said. “So that was fun to play around with, putting characters somewhere who by all rights shouldn’t be there. I’m also a fan of horror stories set in well-lit locations, something a train lent itself to rather well.”

These stories all exist in the same universe, as does her upcoming Twine game The Prom King and an upcoming novella called The Key Copied Midnight, which buyers of Charnel House Trilogy will receive for free in an update, Raze said. And next is a sequel game called Augur Peak that will feature perspectives from (at least) five playable characters, similar to how Charnel House Trilogy looks at the same train ride through Alex’s and Lang’s eyes.

The order in which you experience these stories “doesn’t really matter,” Raze said, “other than the last three [Charnel House, the novella, and Augur Peak, respectively] should probably be experienced in that order — but two of them don’t exist yet.” 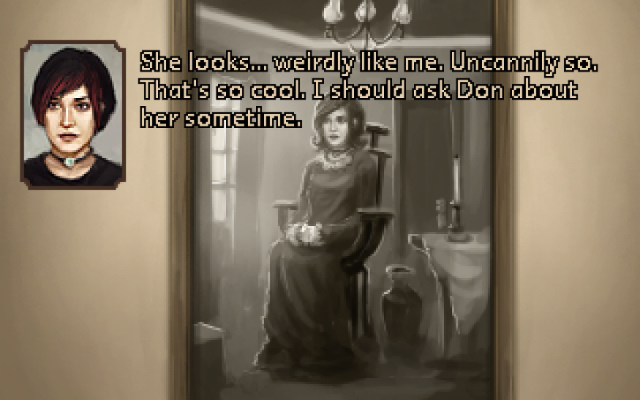 Above: One of the train’s mysteries.

Raze’s experience with writing shows. Charnel House is “an interactive narrative first and an adventure game second,” she said when I noted how minimally “adventure game-y” it was.

“I wanted to cater to both crowds, but not heavily sway in one direction or another,” Raze said. “One thing I didn’t want was the player walking back and forth with no real purpose.

“I think, in a game with a small, enclosed location, nothing’s really lost by funneling the player somewhat. In a larger game, exploring can be a good chance to examine a few more hotspots, uncover a few more clues, but in something like Charnel House, with smaller areas, there are only so many hotspots you can include. The main thing I wanted to do was make sure the plot was progressing at a steady beat for the player at all times, and I think the puzzle/narrative balance we struck hit what I was aiming for.” 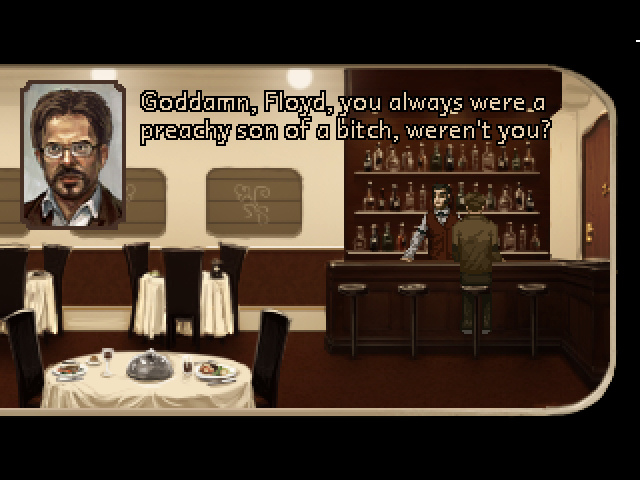 Above: Serve up another, bartender.

A lot of work went into guiding players through the characters’ intimate stories and maintaining the momentum, which keeps building over the game’s few hours.

“I wanted to present the player with a new example of unease or confusion at every narrative beat, but obviously you have to be careful not to pile on question after question, mystery after mystery, leaving players lost and overwhelmed,” Raze said. “There has to be just enough breathing room to try figuring things out but not enough for players to get complacent, with nothing new being presented to challenge them.

“But to keep that flow, the different plot components have to be quite varied. In ‘Exhale,’ particularly, I tried to create this rhythm as Alex moves from compartment to compartment. So she meets Lydia, a lone girl, then shortly after she’s at a party with a number of friends, [and] then the interludes with Don [the train conductor] guiding her between ‘set pieces.’ I wanted to create this tonal flow that naturally guides the player back and forth between arcs, rather than piling on example after example of the same kind of horror and tension.” 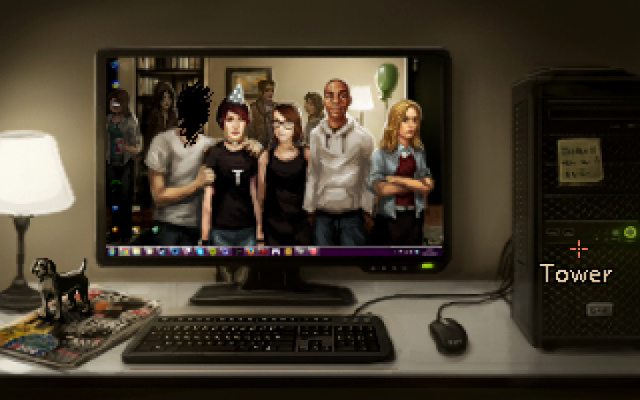 Above: A bitter memory from Alex’s computer.

Raze wants players to come away from Charnel House feeling like they knew the characters. Their stories are only beginning here. Raze has big plans for them — and some of the NPCs, including Don.

“But at the same time, I also want players to come away feeling like if a follow-up never got made — don’t worry, it will — they still experienced enough to fill in the blanks themselves, even if it’s in a much less fleshed out way than I intend the overall story to be,” she said.

It’s a game where you’re going to wonder what happens next — when or if Alex and Lange reach the island and what will happen on Augur Peak.

“Mainly I set out to make the kind of horror adventure game I’d like to play myself and the kind that certain friends of mine would hopefully like.”