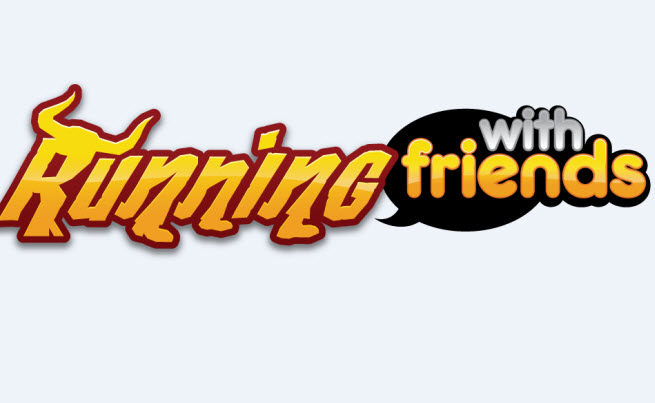 Always running into new social game genres, Zynga is launching its Running With Friends mobile game on the iPhone today. 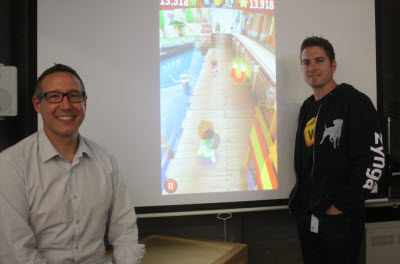 The title is Zynga’s first “endless runner,” or a game where a user controls a runner in a 3D environment and swipes the screen to move in one direction or another. The category was made popular by the indie titles Tiny Wings and Temple Run, and it is now one of the most popular genres on touchscreen devices.

The Zynga title looks innovative. The cartoon-style game is set in the classic Running of the Bulls festival in Pamplona, Spain, where the player has to outrun angry bulls or at least outrun the slowest human runners. It’s a fast-paced action title where you have to switch paths, jump, duck, and sometimes hitch a ride on the back of a bull. Zynga is launching the title in the Apple iTunes App Store in Canada today and it will release the game in the U.S. in about a month.

“We wanted to take our With Friends brand and move it into another category,” said Travis Boatman (pictured, on the right), in an interview with GamesBeat.

Zynga’s game was made with partner Eat Sleep Play, a game studio that has previously work on console games like Twisted Metal: Black and Warhawk. Zynga contributed its own know-how in mobile and social games, while Eat Sleep Play focused on making the game more fun. 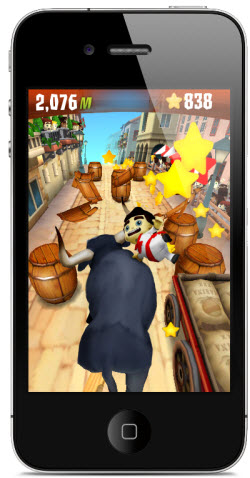 Justin Cooper (pictured, on the left), director of Running With Friends at Zynga, joked that his company sometimes had a different view of what was funny compared to the developers at Eat Sleep Play, who wanted the bulls to run over the players and tear their guts out. But Zynga’s audience is “purple,” or a combination of males and females. Gory stuff isn’t appropriate for them.

“They wanted to move into mobile and partner with us,” Cooper said. “They shared our vision of mobile gaming. They were a phenomenal partner, though they naturally tended toward a darker game. We shifted them to what we though was cute and funny.”

Eat Sleep Play worked on the 3D engine and other engineering to make the game fluid. Eat Sleep Play was founded by Scott Campbell and David Jaffe (who has moved on). The team worked on it for a while to make sure the title was polished and that its levels were well crafted.

The social part of the game comes into play through the “With Friends” part, which comes from Zynga’s successful franchises such as Scramble With Friends (which Cooper worked on) and Words With Friends. In the game, you can challenge your mobile phone friends or your Facebook friends to matches, where you try to beat each other’s scores and times. It’s easy to create challenges, sends messages to friends, and check your score on the leaderboard.

Some Zynga critics might ding the company for copying someone else again. But Boatman said that his team worked hard over nine months to differentiate its title with small details, like crashing through destructible objects. The game also has a slot machine that runs at the beginning. The reels can land on different bonuses, such as bonuses for destroying the most boxes. Since the slots can change every time, the feature adds replayability that affects which strategy you use. 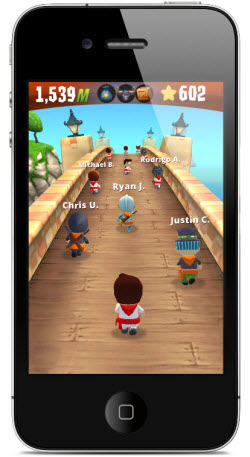 “Most of the other experiences we saw were lonely,” Cooper said. “This is a lot more competitive than a standard With Friends game. What’s wonderful about this category is that it is so simple.”

On top of that, Boatman said that endless runners may be a vast category, much like the first-person shooter genre is on the consoles and the PC.

You can run as a ninja, a ballerina, or a zombie. You can jump up to higher levels to avoid the bulls, and threats come to you from behind or ahead of you. You can smash through signs and knock down other humans, including your friends. If you’re good enough, you can ride on top of the bulls and destroy everything in your path. You can run down an alley and take a short cut.

It requires split second timing, or you have to start over. If you want to keep running, you eventually have to pay coins to do so. And that’s one way that Zynga monetizes the game. Zynga also inserts ads into the game. You can pay to do without them, Boatman said.

There is plenty of other competition. Imangi has launched its Temple Run and Temple Run 2 games. The latter got 50 million downloads in two weeks. Disney also teamed up with Imangi to launch Temple Run: Brave and Temple Run: Oz. Those games, along with Zynga’s, will test whether the category has legs as Cooper believes, or if the market will get saturated.