We had a good look at the first full act of Microsoft’s exclusive Windows 10 and Xbox One title, Quantum Break. The new story-based shooter from Remedy Entertainment, the maker of Alan Wake and Max Payne, features Jack Joyce (played by actor Shawn Ashmore) as a man who can manipulate time because of a scientific experiment that goes awry. Joyce has to act fast to stop his friend, Paul Serene, from executing a diabolical plan that will bring about the end of time.

Quantum Break is one of Microsoft’s biggest exclusives for its platforms, and the time-bending title game has been in development for four years at Remedy. It represents the high end of what is possible in video games when you combine both cinematic live videos and interactive gameplay. If Microsoft and Remedy pull it off, they could have a monster hit in the $23 billion video game industry, as well as a game that is highly replayable because of the way you can go back and make different decisions. 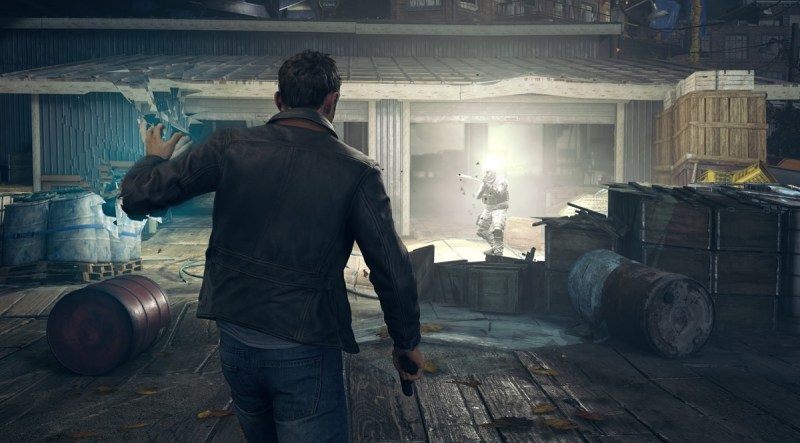 Above: Quantum Break isn’t a run-and-gun shooter. You have to play time tricks to stay alive.

Quantum Break has five acts where you play as Jack, who finds he can stop and rewind time. But at the end of each act, there’s a junction point where the player must make a decision. Depending on what you decide, either one video or another will play. The video is a 20-minute live-action sequence that focuses on what is happening with the villain Paul during the game. There are so many different possibilities that Microsoft and Remedy created a total of 40 different live-action videos for the game. Each player will see a different story unfold, based on the choice they make.

Greg Louden, the senior narrative designer at Remedy, promises a lot of dramatic twists, and he suggests there’s more moral ambiguity in the story than it first seems. If you’re confused about how this is going to turn out, you’re not the only one: “I got a whole new batch of messed up shit I need you to explain,” Jack says to his brother, Will, near the end of Act I.

Quantum Break debuts April 5 worldwide and April 7 in Japan. Here are some videos of gameplay in Quantum Break’s first act. The footage starts in the second scene of the game, just as Jack Joyce realizes that he has special powers to manipulate time. Jack is incredulous for a moment during the slow motion, but he realizes that he can save Will from being shot in an instant. (See our full preview here and our interview story here).

Spoiler alert: These videos that tell you what happens at the start of the game.

In the second video, Will gives Jack his car keys to fetch something from the car. He never makes it.

The third video shows Jack facing off with Beth Wilder, who is supposed to be taking him down.

The fourth video shows Jack atop the library and his attempt to stop his Paul Serene from carrying out his evil plan.

And in the fifth video, you have to decide which course the villain will take.