China’s Cmune is the rare company that has been able to figure out how to do multiplayer first-person shooter games on platforms such as Facebook. Now it is launching its latest shooter, Bullet Rush, on touchscreen devices in an effort to raise the level of innovation in mobile.

Shooters dominate the consoles, with games like Call of Duty generating $1.7 billion a year. CrossFire, an online shooter, generates $1.2 billion in China alone. And the mobile market is approaching $25 billion, says a report from market researcher Newzoo. But shooters haven’t done well on mobile because of the demanding 3D graphics and fast data networks required for multiplayer play. But Cmune has solved those problems with the launch of Bullet Rush on iOS, said Ludovic Bodin, the chief executive of Beijing-based Cmune.

“Over the last six years of doing multiplayer shooter on PC and mobile, we became very good at doing multiplayer with low latency on any network anywhere worldwide,” he said in an e-mail interview. There is “no disconnect whatever your internet connection, and quick matchmaking whatever day and night in Asia, America or Europe.

“We also understood the power of accessibility for the genre. Give a guy a gun and he will be happy. Ask him to buy an expensive PC or console, wait for hours to download the game or minutes to enter a game with others, and [you lose the player].”

The free-to-play game is live in the Apple App Store now. Optimized for iOS 8, it is playable worldwide in 15 countries. Some early players have put in about 6,000 games in the last 30 days and killed more than 12,000 opponents. The download is less than 100MBs. 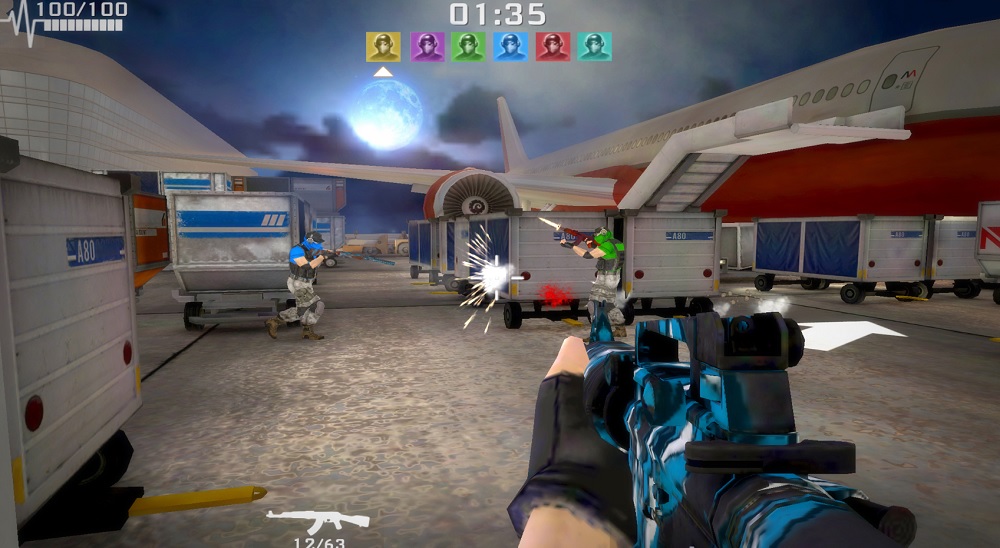 In Bullet Rush, you play a masked mercenary. You can compete on a team or on your own against everyone else in tightly designed battle maps. Each match lasts three minutes or so. Modes include Elimination, Last Man Standing or Last Team Standing. You can play 2-versus-2, 2-versus-2-versus-2, or 3-versus-3. That’s where you see some tradeoffs, as Call of Duty multiplayer games on consoles are typically as many as 18 simultaneous players.

At the end of a match, you win XP points, cash, and medals that you can use to improve your rank and unlock weapons.

Cmune previously created its shooter game UberStrike, an online multiplayer shooter with more than 25 million players to date. The company has succeeded on that front by offering low-latency play (with few delays), no disconnects, and quick matchmaking. Bodin said the new game is also designed for accessibility, community, and balanced play. You can buy in-game items, but you can’t buy victory using real money. The games have short sessions, and the code is lean, Bodin said.

The company was trying to go for a feel like World of Tanks, a multiplayer team shooter (with tanks, of course) that has great art and speedy gameplay.

Being really good at what matters “starts with good networking capability for multiplayer,” Bodin said. “We did not see any multiplayer FPS doing well on that on mobile before. We actually barely see any good multiplayer games on mobile.” 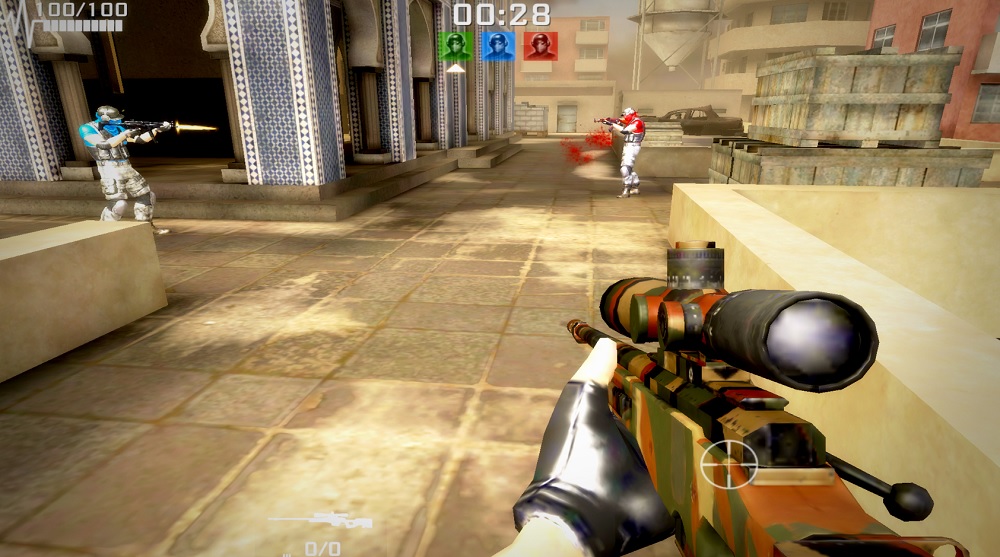 Bullet Rush has an “aim and shoot” touch control. Weapons “auto-shoot” when the opponent is at range and on-target. That’s how Cmune gets around the problem of playing shooter games on imprecise touchscreens. Players can also play without the targeting assit if they wish, Bodin said, and that opens the door for e-sports on mobile.

“Cmune, with Bullet Rush, nailed down the control for FPS on touch: very intuitive and accessible from new players to pro,” said Charles Huang, the creator of Guitar Hero, in a statement.

You can upgrade and earn new weapons. Players can also receive guns from friends as free gifts. Bullet Rush has 25 realistic weapons and a bunch of unique camouflage skins. Over 250 weapon upgrades are available out of five character classes: sniper, machine gun, handgun, melee, and shotgun.

Bullet Rush also has a long-term career system, where you can pursue your gig as a mercenary. There’s a tutorial for new players, and you can also spectate games or record them as videos.

For more advanced players, Bullet Rush has a progression of Daily Missions, over 500 career objectives and challenges, and weekly tournaments.

Cmune has raised money from Atomico, DCM, and numerous mobile and gaming veterans.

“Everything that is difficult in making a good online shooter on PC becomes even more difficult on mobile. And that starts with multiplayer,” Bodin said. “Even with six years of multiplayer on pretty poor connections around the world with web game, we spent the last six months in beta tuning our tech there to make sure that there is no lag, no disconnect.”

Bodin figures some hardcore gamers will be purists and resist Bullet Rush.

“History just repeats itself. FPS was only good on PC with a mouse and a keyboard, until it became so good on console that it is now top grossing genre there,” he said. “Now that the touch platform is by far the largest gaming platform available, and shows no sign of slowing down, it s just a matter of time before genre such as FPS are top grossing there. So you need to talk to the right people in the gaming community, those with a vision and an understanding of what can and will happen. Not those living in the past.”