The deal signals further consolidation in the mobile market for advertising aimed at acquiring new users for games and apps. In this multibillion-dollar market, bigger companies are going global by amassing operations in each regional market.

“It’s important to be competitive globally in this space,” said Rob Weber, chief executive of Minneapolis-based NativeX, in an interview with GamesBeat. “By combining with a company that is strong in Asia, we’ll be able to see faster growth.”

Guangzhou, China-based Mobvista is the largest mobile ad network company in Asia. The company is strong in Asia and in non-gaming apps, while NativeX is strong in the West and in games.

NativeX was founded as W3i in 2000 as a desktop-based advertising company. It expanded to mobile ad monetization in recent years and rebranded as NativeX in 2013, to emphasize its focus on “native ads,” or those that leveraged the content of the app or game so that users wouldn’t be turned off. Rob Weber took over the CEO role last year, and the company shut down the desktop division in April 2015. Now it operates its mobile offerwall, a native video ad platform, and interstitial ads that are embedded in applications.

Once the transaction is completed, NativeX will become a subsidiary of Mobvista. Rob Weber will continue as CEO of NativeX and serve as vice president of the Mobvista Group. Weber’s twin brother Ryan will also stay on as chief product officer. 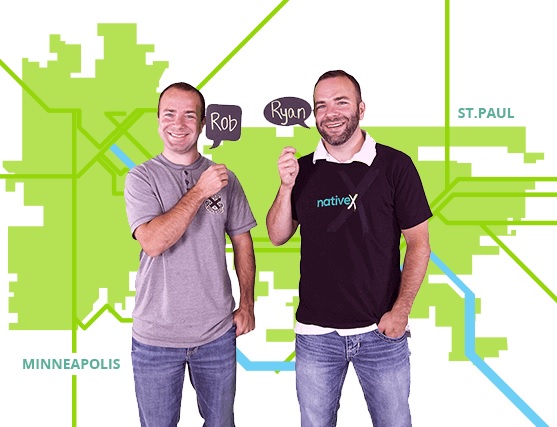 Above: Rob and Ryan Weber built NativeX into a 50-person company in Minneapolis.

“NativeX is a solid, sustainable business and our technology focus and values are perfectly aligned to deliver rich growth opportunities to the mobile market and to further secure Mobvista’s international goals and success, especially to speed up our ability to supply substantial audiences in Western markets,” said Wei Duan, founder and CEO of Mobvista, in a statement. “Acquiring NativeX is another key step in realizing our global ad-tech vision to develop a multi-dimensional global ecosystem of mobile traffic.”

This year’s VentureBeat Mobile Summit will feature conversations about cutting-edge mobile growth strategies The executive-level event takes place April 4-5 at the scenic Cavallo Point Resort in Sausalito, CA.Space is limited to 180 executives — but it’s not too late to apply for one of the remaining seats.

Mobvista already reaches more than 10 billion daily impressions in 240 countries for its worldwide mobile ad network. Founded in 2013, Mobvista targets users in the billions on behalf of thousands of clients, with a significant focus on Southeast Asia. Mobvista ranked No. 3, following Facebook and Google AdWords, in the Global Android Power Ranking released in 2016 by AppsFlyer, a leading mobile analytics platform. Mobvista has more than 300 employees.

NativeX has an audience reach of over 1.3 billion mobile users and works with more than 1,000 publishers, including Yodo1, Square Enix, Fingersoft, Madfinger Games, Mag Interactive, Outfit 7, and Play With Games, as well as hundreds of top advertisers including Disney, King, Zynga, Rovio, IGG, and Machine Zone. Weber said the company has been profitable for 12 consecutive years, and it is targeting $50 million in revenue this year. NativeX has 50 employees, and it will continue to be based in Minneapolis.