2016 was a year in which Chinese mobile games became popular around the globe. A total of 84 games from Chinese publishers made it into the top 1,000 rankings globally, compared with 45 a year ago. That’s an 80 percent increase. 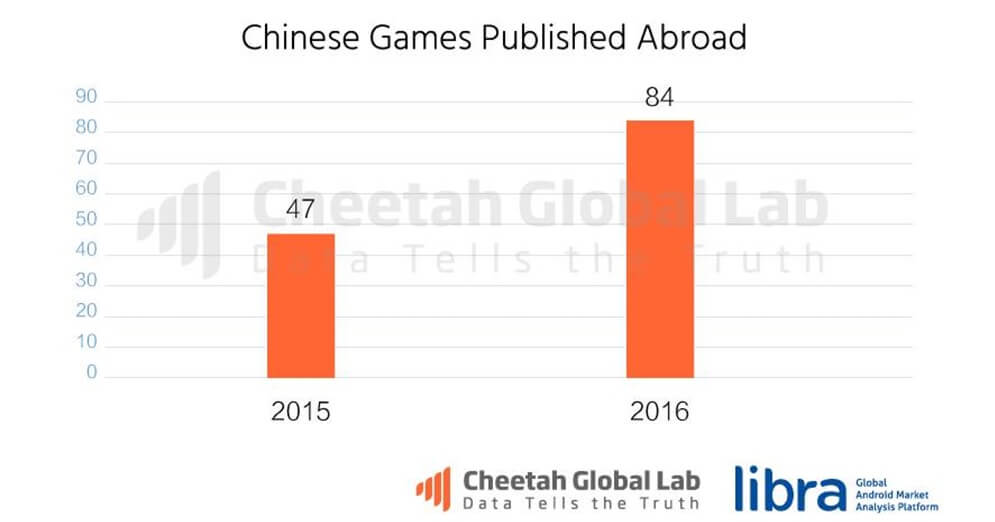 Above: Chinese publishers had 84 games in the top 1,000 mobile games.

Of the 15 categories of Chinese games which made it into the Top 1,000, action games were the most popular. That’s because they do not require much effort to localize and translate, thereby bypassing cultural obstacles, Cheetah Global Lab said.

The ease of transition to overseas markets signals that action games are relatively more suitable for exporting abroad, and that they possess a higher chance of success outside of China. 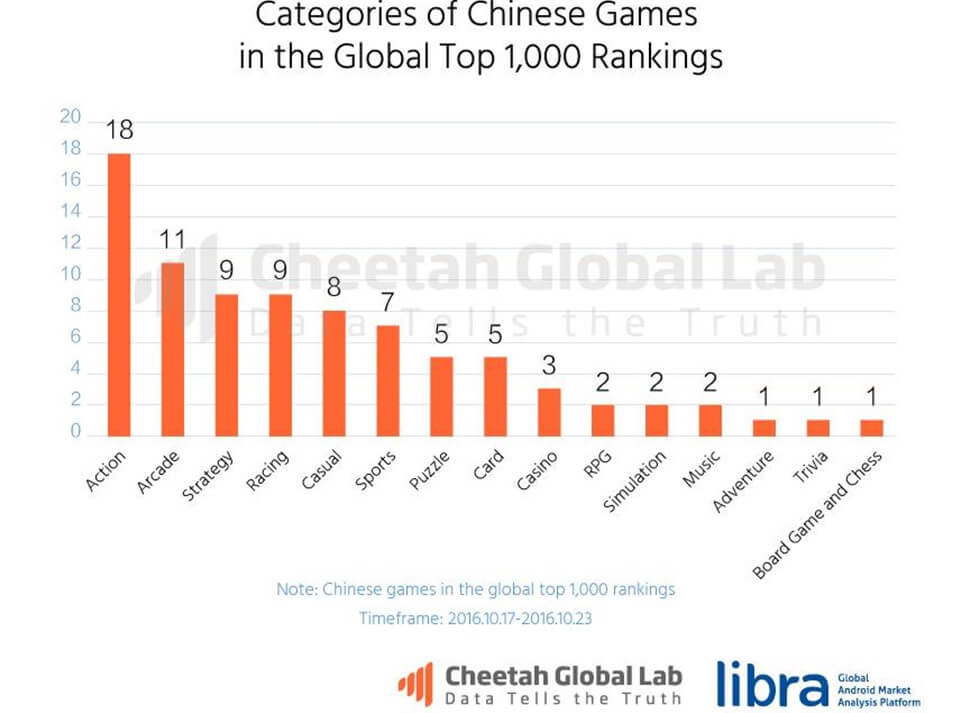 Above: Chinese action games are most likely to be successful in the global mobile games market.

Cheetah Global Lab has also figured out which Chinese games made it into the top 100 leaderboard in the U.S., Russia, India, Indonesia, Brazil, and Vietnam. In doing so, it is able to analyze what succeeds in these markets relative to the unique characteristics of key global markets. This will help Chinese companies hoping to expand to these markets with their strategic planning.

According to the Cheetah Global Lab database, Chinese games are performing noticeably better in Indonesia, Brazil and India, and it’s easy to see the similarities between these markets.

More importantly, the mobile Internet is growing fast in all three countries, with a significant level of government investment and policy support.

Also, these countries are currently in the midst of benefiting from a “demographic dividend”: India’s 1.27 billion people makes it the second largest population in the world, while Indonesia is 4th at 253 million, and Brazil is 5th at 202 million. The number of young mobile users in these countries is rapidly increasing.

For Chinese companies looking abroad, these emerging markets enjoying a “demographic dividend” should be their first choice. 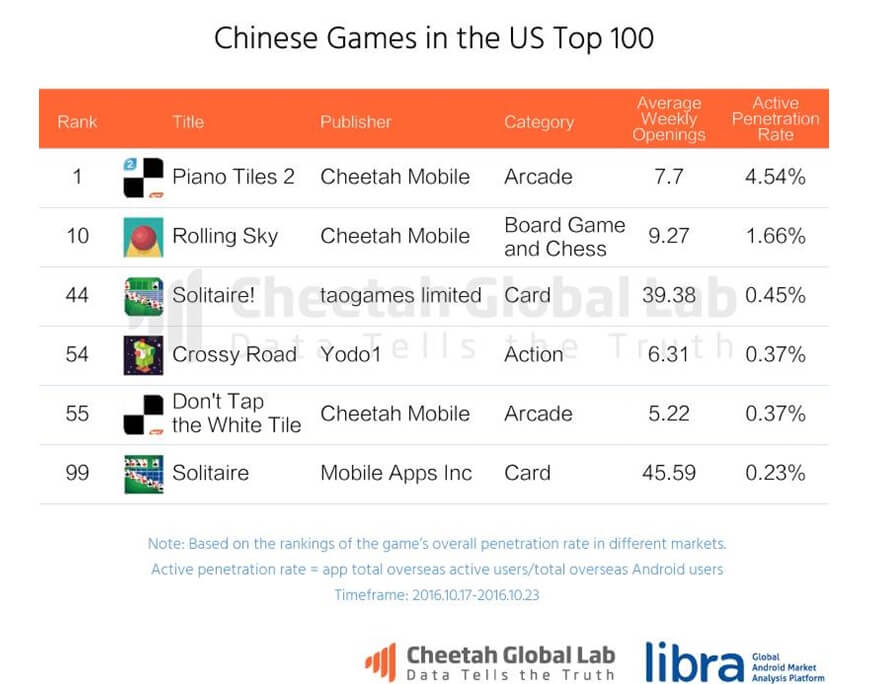 In 2015, the U.S. mobile game market was valued at approximately $6.3 billion, the second largest in the world after China. Mobile data infrastructure is developed and smartphone penetration is relatively high, while the gaming market is sophisticated with excellent copyright protection. This makes the U.S. one of the most mature mobile gaming markets in the world.

According to data from Baijing Apps, 50 percent of American gamers play between one to four hours of mobile games each week, averaging to about 10 to 30 minutes per day. Americans play games to kill time, which is why the U.S. is the casual gaming capital of the world.

Five Chinese games made the U.S. top 100. Two of the Chinese publisher casual games that are hits in the U.S. include Rolling Sky, from Cheetah Mobile, and Crossy Road, from Yodo1.

Meanwhile, the Russian market is different. Based on data from mobile analytics platform Flurry, the Russian mobile gaming market will reach $707 million by the end of 2016, with average daily gaming time reaching 40.8 minutes per user.

In Russia, eight Chinese titles reached the Top 100. Games with exciting and thrilling elements tend to perform better in Russia. One Chinese success in Russia is Castle Clash is a strategy game developed by IGG that is similar to Clash of Clans. 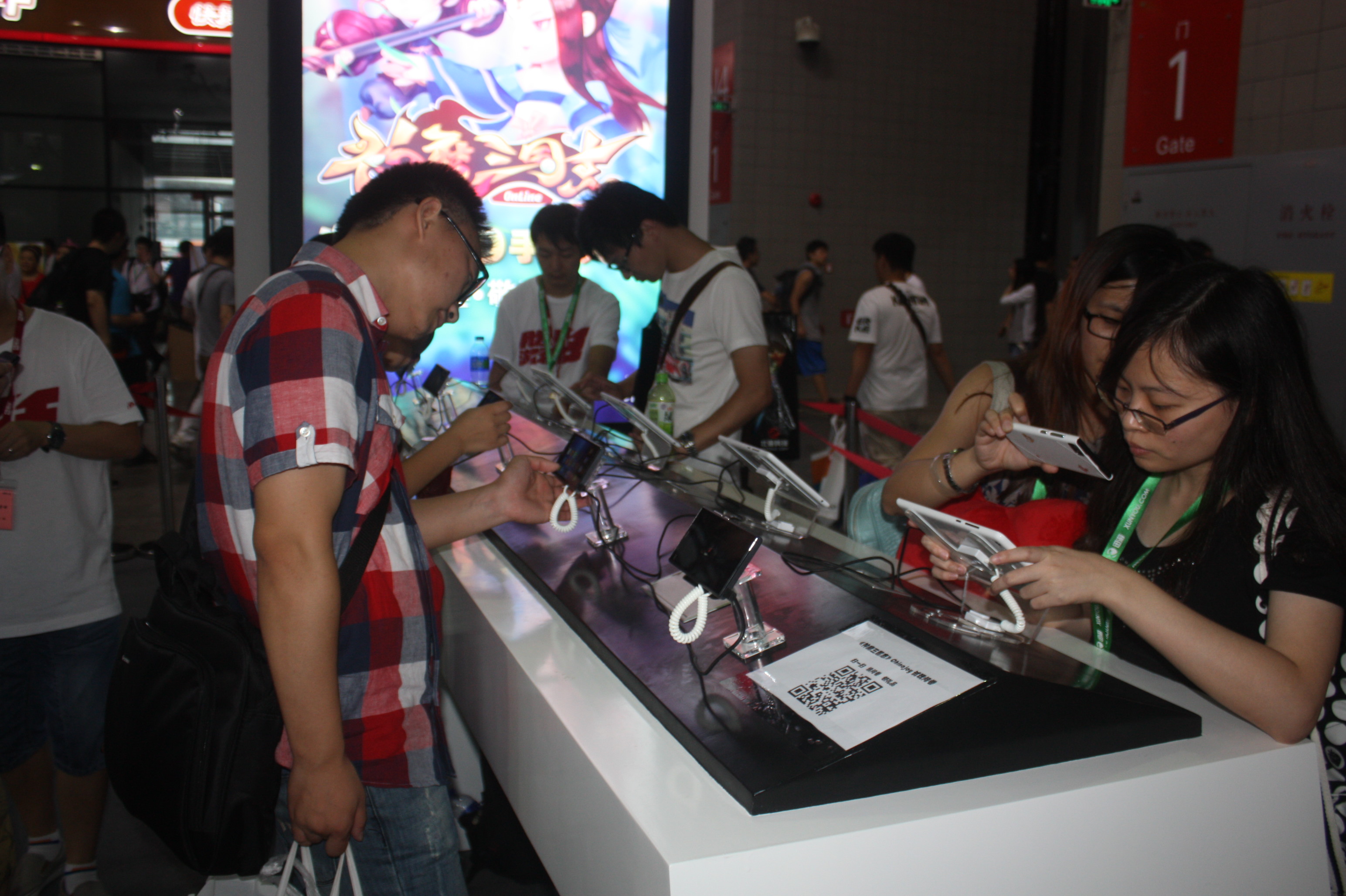 Above: The N5 hall at ChinaJoy was dedicated to mobile games.

According to data from market researcher eMarketer, there are nearly 48.6 million mobile gamers in Brazil, almost a quarter of the total population, with female gamers (52.6 percent) outnumbering male gamers (47.4 percent). As of 2015, the mobile gaming market reached $330 million, ranking 11th globally and first in Latin America.

Brazilian gamers have shown a willingness to spend money on games, with average revenue per user (ARPU) reaching $70.

Of the Chinese games in the rankings, the most eye-catching is Legacy of Discord: Furious Wings from GTarcade. It is the only ARPG on the list. The game was designed for the European and U.S. markets, and currently does not have a Chinese version.

Although Brazil is full of opportunity for mobile game publishers, Chinese firms must overcome payment obstacles in the country. In Brazil, cash and bank transfers are the primary forms of payment, due to the difficult process of applying for a credit card. In addition, local distributors take a relatively high percentage of revenue, which, combined with the high tax rate, present a difficult challenge for Chinese firms.

According to data from market researcher Niko Partners, the mobile gaming market in Indonesia was only reached $11 million in 2013. But at that time, the country had 24 million mobile gamers. In Indonesia, free-to-play games with in-game paid features are very popular.

As bordering nations, Vietnam is the most similar to China of all the countries in Southeast Asia. In terms of user behavior, that also means Vietnamese gamers share much in common with Chinese gamers. At the same time, due to the country being relatively closed-off, with a low average level of English, European and American games are not popular in Vietnam.

Overall, Vietnam is a land of casual games, highlighted by the popularity of Flappy Bird, which originated from Vietnam. According to Cheetah Global Lab, 23 of the Top 100 games in Vietnam are casual games. There are eight Chinese games which made their way into Vietnam’s top 100.

One popular title is Fishing Diary from Chinese publisher DroidHen. In addition to casual games, Vietnamese gamers have displayed a strong appetite for strategy games as the second most popular genre. According to data from Cheetah Global Lab, there are six strategy titles in Vietnam’s top 100, of which Castle Clash and Lords Mobile are from Chinese game publisher IGG. These two titles have both maintained high weekly opening rates, and a sustained period of growth in active users.

Overall, Chinese game publishers’ overseas titles indicate that most publishers focus on one game category. For example, Elex and IGG are known for strategy titles, while Microfun and Yodo1 have released casual games with simple gameplay.