I’ve been spending less time playing online shooters lately, and maybe it’s because I’m getting bored of all those digital guns. I just needed to put down my rifle and pick up a pike. Earlier this month, I tried out Chivalry II during a press preview event and then during a test weekend. And by sword and shield, did I have fun.

Chivalry II is a medieval combat game by Torn Banner Studios. It’s kind of like a multiplayer first-person shooter, except you’re swinging swords and maces instead of shooting guns. I missed out on the original Chivalry, which came out back in 2012. I will not repeat that mistake for this sequel, which debuts on June 8 for PC, PlayStation 5, Xbox Series X/S, PlayStation 4, and Xbox One.

Although I didn’t play the first game, I didn’t feel overwhelmed starting the sequel. Chivalry II has a helpful and efficient tutorial that teaches you the basics. You can have three main weapon attacks: swings, piercing strikes, and overhead blows. You can also counter, parry, defend, kick, and more. Fights become something of a game of rock-paper-scissors, as you’ll be most effective if you can anticipate your opponents attack and counter it. You don’t just want to swing your sword blindly. 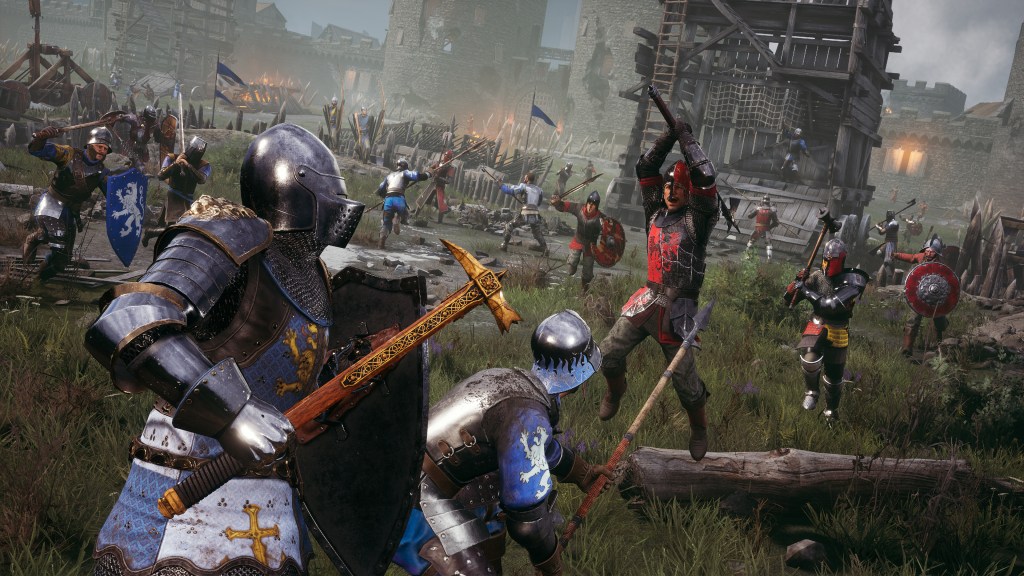 Above: You have to see your siege towers to safety.

I experienced two different game modes during my preview. One is a take on team deathmatch. Two teams run at each other in an open field and kill each other until one side wins. This runs off of a ticket system that will be familiar to any Battlefield fans. Each team starts with a certain amount of tickets. If you die, your team loses a ticket, but you can respawn back into the melee as long as your team still has tickets to spare. When your team runs out of tickets, you lose.

The other mode was a more complex multistage castle siege with an attacking team and a defending team. It reminded me of the Galactic Assaults from Star Wars: Battlefront II. I was on the attacking team, and we started by having to escort two siege towers to the enemy’s castle walls. From there, we had to fulfill a series of other objectives, like securing a courtyard, while the defenders tried to hold us off until our time limit ran out. At the end, we had to kill the castle’s lord, controlled by an actual player on the other team, in order to win.

Both modes were fun. I enjoyed the simple mayhem of the team deathmatch, and I also liked the extra dimensions of the multi-objective mode.

I also enjoy the game’s silly tone, which has a bit of a Monty Python and the Holy Grail flavor to it. Your characters sound more wimpy than heroic, and voice lines often poke fun at the game’s barebones story. Fighters will yell things like “Go red team!” or fumble their words as they forget the name of the king that they’re fighting and dying for. 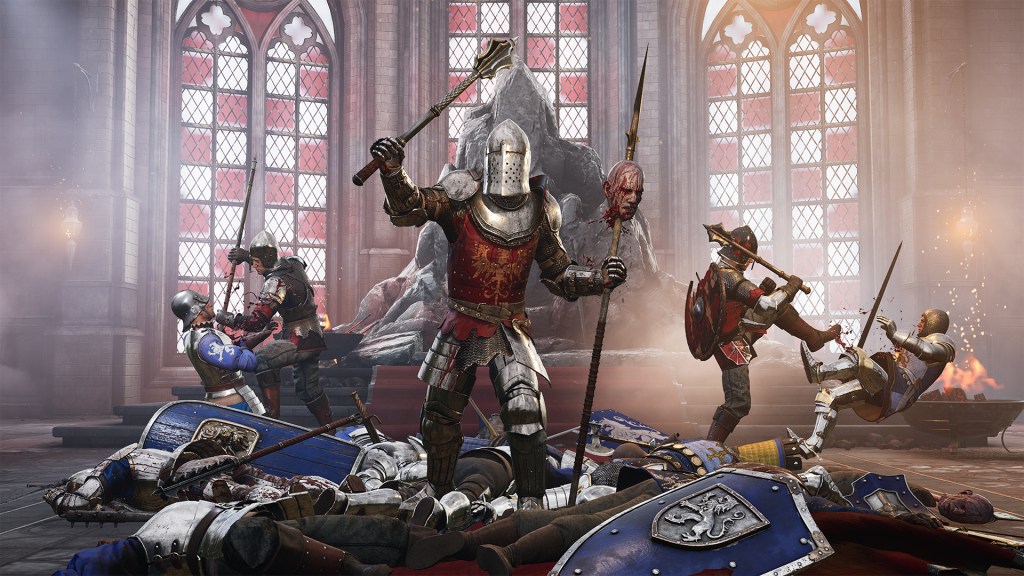 Above: The game can get bloody and gory, but the tone is really mostly silly.

The combat is what makes the game work so well. Attacks feel strong. You aren’t swinging a sword around like it was made of paper. The weapons feel heavy and powerful. And although the idea of just using melee weapons in a game like this may seem simple to some, you need a good amount of timing, positioning, and reacting if you want to be a real medieval warrior. It’s less about targeting specific body parts and more about using the right attack that’ll hit an opponent depending on their distance and current action.

I admit that I agreed to attend this preview with some hesitance, as I hadn’t played the original and didn’t think I was all that interested. Now Chivalry II is one of my more anticipated games for the rest of the year.