Competitive multiplayer games haven’t had much of a shot on mobile, but Deyan Vitanov, the co-founder and chief executive of Chobolabs, aims to change that.

He announced today that the Palo Alto, Calif.-based company has successfully completed a $1.3 million round of funding to bankroll its first game, a platform-shooter designed specifically for tablets and smartphones. The team has developed its own real-time networking engine, he said. The game is in beta testing now.

“I am convinced that over the next 12 to 18 months, competitive gaming will emerge on mobile and capture core gamers’ attention,” he said in a statement. Vitanov is a former professional gamer himself, competing for four years in games including the first-person shooter Counter-Strike and the real-time strategy in space title StarCraft: Brood War. 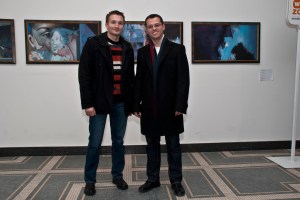 Vitanov founded the new company with Petar Dobrev, an engineer he had worked with at his earlier philanthropic startup, which was acquired by nonprofit information aggregator GuideStar. A more recent addition is Ilian Georgiev, who managed Tap Paradise Cove and Episode for Pocket Gems. Those games have made more than $100 million in revenue, Vitanov said.

The rest of the Chobolabs team comes from companies such as Ubisoft and Gameloft and have worked on properties including Assassin’s Creed and Trism.

Vitanov credits StartX, the startup incubator at his alma mater, Stanford University, with helping to get the company off the ground. Innovation Endeavors led the funding, with participation from investors, including:

“I’d like to express my gratitude to all my investors and especially Dror Berman, founding and managing partner at Innovation Endeavors, Eric Schmidt’s seed fund,” Vitanov said. “Dror believed in us when we were two guys with a PowerPoint deck and a crazily ambitious idea. We wouldn’t be where we are today without him.”

Chobolabs is a finalist in the GamesBeat 2014 Who’s Got Game Innovation Showdown.