Editor's note: I'd imagine that most Bitmob readers take beating a game rather lightly. We start a game, and if we like it enough, we play until we've finished — no big deal. But for a lot of people out there, games are hard, and beating one is cause for celebration. My younger sister falls into the latter category and would like to share her accomplishment with you. Good job, sis! – Aaron 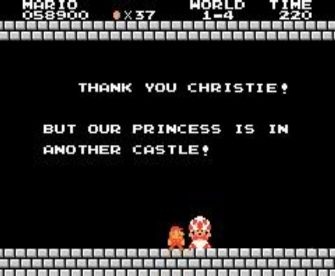 In a previous Bitmob piece, I claimed to not be a gamer. While I still hate that label, I feel like I may have lied — not to mislead you, but to fool myself. I'm proud to say that I do play the occasional video game, though I've never actually finished one. It's true; never in my life have I rescued the princess, killed the final bad-guy, or gotten a score so high that a nerd ran around an arcade telling people that I was about to get to a kill screen.

This morning that all changed — I beat the boss in Plants vs. Zombies. For the first and only time in my life, I beat a game!

Here's how it happened:

A few weeks ago, I called my brother, Aaron, who lives out in San Francisco and works for Bitmob. We talked for a minute, and then he said he had to go because he was playing something called "Plants vs. Zombies." I thought he was making this up and just didn't want to talk anymore. He explained that it was a computer game by PopCap, and that he was playing for fun (not work, for once). He gave it a rating of “pretty good." I thought the whole thing sounded pretty stupid.

Although I thought the premise was dumb, I couldn't help but be curious. I’m not very good at video games, but I can kill stupid zombies. I mean really, how difficult could something called Plants vs. Zombies actually be? I decided to download the game and give it a shot.

Things got off to a rough start. I quickly picked the plants I’d use to defend my yard, but I picked the wrong ones. The zombies crossed my lawn, ate my plants, got into my house, and ate my brains.

It took a few tries to pick the right plant combinations. If I had been fighting actual zombies, I probably would have quit the first time they crossed over the welcome mat, but the cartoon nature of the game made it fun. Then again, if the game were hardcore, one probably wouldn’t be using pats of butter to fight off zombies in the first place.

I kept playing. I thought about new strategies and pondered what I was doing wrong. I'd check the clock to see if I had time to play a quick round before leaving to teach a yoga class, but I told myself killing cartoon zombies probably wasn't a good excuse for being late to work —  I’d have time to play when I got home. I was hooked and I didn't even realize it.

Although I wasn’t great at the game, I kept going because every round was a new challenge. I could use a variety of plants, launch different veggies, and use psychedelic mushrooms to cause the zombies to turn on each other. I had just gotten into a groove when the game switched to the backyard: zombies were now in my pool and they were swimming towards my house and my (apparently irresistible) brains.

I needed a consultation, so I called my brother. He advised me on what to plant on land and what to use in my pool. This new strategy worked for a bit, but then the zombies got crafty and used balloons to float overhead to get into in my house and devour my brains.

The zombies might have been dumb, but they sure were persistent. After I chased them off my lawn and out of my pool, they climbed the roof of my house! No matter what I tried, I couldn't knock my dimwitted foes off, so I  decided to change my gameplan. I gave up on some of the plants I’d been using and picked some that were more aggressive.

Cabbage, corn, butter, watermelons, and peas filled the air. There were zombies everywhere: they drove carts, threw dirt clods, and dropped cars on my roof to smash my plants. I did my best to hold on, and then suddenly the dreaded conveyer belt of random cards appeared. This could only mean that I was at the end of the level; that I was about to take on the final boss.

I was ready to do battle. The cards rolled by and I let them stack up before I started planting (I had learned long ago that it is best to have as many full pots as possible). Then, I attacked. The cards kept coming and so did the zombies, but I did my best to keep a plant in every flowerpot. I countered the zombies’ every move. I kept planting and firing and freezing. I felt pretty good; I had plenty of plants in plenty of pots; my defensive line was strong.

And then the boss fell.

I held my breath as I waited for another assault, another round of pool-hopping, balloon-toting, roof-climbing zombies. But that didn't happen. Instead, rays of light spread across my screen. A statue appeared, and the zombies left a note saying that they weren’t going to eat my brains anymore — they just wanted to make a music video with me. Plants sang and zombies danced as the credits rolled.

It was too early out in California for me to call my brother to tell him I had won, so I spread word of my victory over the zombies on my Facebook page. Aaron called me a few hours later, and I shared with him my tale of the heroic final stand of my plants, and the crushing downfall of the brain-hungry zombies.

Aaron once told me that he would buy me an Olive Garden franchise if I beat the final castle in Super Mario Bros. That was over ten years ago, and I have yet to get past world 8-1. But hey, I just took down an army of zombies — a bunch of turtles and mushrooms might not be so hard now…