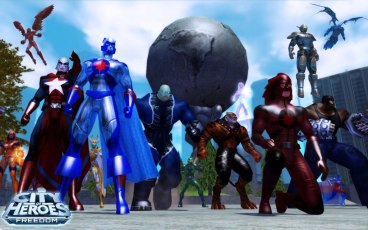 City of Heroes, an online role-playing game run by NCSoft, will now use a freemium model that makes money off the sale of premium goods in lieu of requiring all players to pay a subscription fee.

All City of Heroes players can now play until they reach level 50 without paying a cent. The game will give players the option to purchase new content and items — such as boosters that will help them become more powerful faster — in an a la carte model similar to the virtual goods markets pioneered by social gaming giant Zynga.

That model has become so popular that entire companies have been built from scratch around it. Zynga, the largest company in the space, has filed for an initial public offering and looks like it will raise up to $1 billion in its IPO. It’s already profitable, too, which is better than many other recent IPOs like cloud music player Pandora.

City of Heroes is a subscription-based game that had to go up against supergiant online game World of Warcraft, which now has around 11.4 million users. World of Warcraft came out in 2005 and quickly became the most popular online game. The game cost players around $12 a month, making it hard to justify paying for a second game’s monthly subscription.

Other online games have had a lot of success converting from a subscription-based model to a free-to-play model. Revenue from Turbine’s Lord of the Rings Online doubled and its player base increased by 400 percent in the month after it went free-to-play last fall. Revenue for the company’s first experiment in going free-to-play, Dungeons and Dragons Online, jumped by about 500 percent after the shift.

Hellgate: London, another subscription-based game shut down in 200 but recently returned as a free-to-play game in June. That game was made by former members from Blizzard Entertainment, the development studio behind World of Warcraft, but still fell to the online gaming titan before reviving as a free-to-play game.

You can check out a trailer for the freemium version of the game below.