Somebody is going to knock Clash of Clans out of the No. 1 spot on the top-grossing mobile apps charts one of these days. The latest to attempt this feat is DomiNations, the new Civilization-like mobile game from Big Huge Games and Asian gaming giant Nexon. DomiNations launches today on both Apple’s iTunes App Store, Google Play, and Amazon.

If DomiNations succeeds, Big Huge Games can steal a chunk of revenue from Supercell, which generated $1.7 billion in 2014 from just three games, including Clash of Clans, which has been at the top for a couple of years of the mobile market — a sector that could reach $30 billion this year, according to research firm Newzoo.

The base-building strategy release taps Big Huge Games’ heritage in human history games and applies it to the simpler touch interface of mobile. Its multiplayer version is akin to Supercell’s Clash of Clans, but it allows for more interactive control of a battle, where you attack your enemy’s stronghold. It is the latest title from veterans Brian Reynolds and Tim Train, who have been making strategy games like Alpha Centauri and Rise of Nations for 24 years.

“The common thread of successes has been history games,” said Train, in an interview with GamesBeat. “What our team does well is make history fun and accessible to a broad audience.

“We also played a ton of mobile strategy games and were excited about doing a world history game set in all of human history, set on mobile. In the old days, if we sold 3 million units of Civilization II, we were excited. In this era, you can put a game out that has 100 million players. We felt genetically born and bred to do this game. We think history is one of the best intellectual properties you can have because everyone knows something about history.”

Going off the strategy track 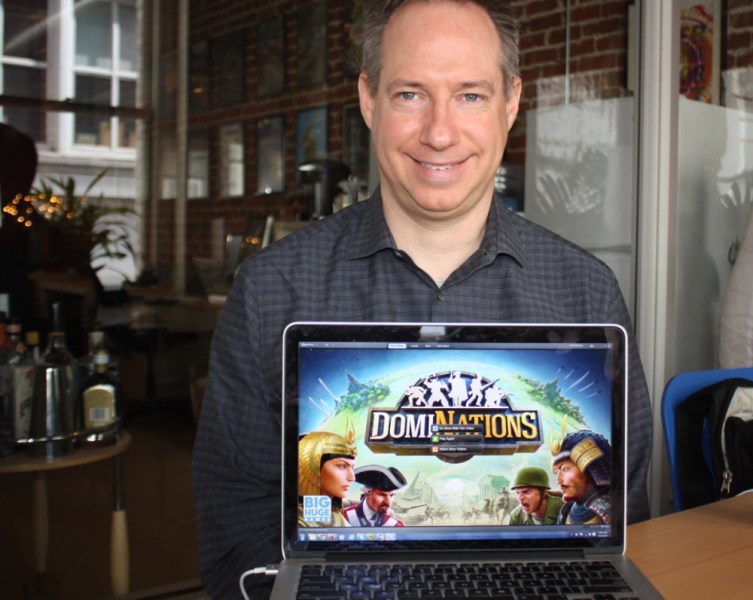 Reynolds and Train veered off the track of history games for a time. They most recently worked in game design roles at the Baltimore-based Zynga East studio, until the publisher shut it down in 2013. In 2014, they created a startup studio and bought their former name, Big Huge Games — formerly a PC game studio that made real-time strategy games Rise of Nations and Rise of Legends — after the state of Rhode Island auctioned it off last fall in the wake of the collapse of Curt Schilling’s company, 38 Studios. Big Huge Games made Kingdoms of Amalur: Reckoning, for 38 Studios. In re-acquiring the Big Huge Games brand, Reynolds and Train tapped into the nostalgia for those strategy games of yore.

Reynolds and Train rebuilt their studio in Baltimore, and they signed up Nexon M, a mobile-focused division of Tokyo-based Nexon, as a publisher. Reynolds and Train got their start working for game design wizard Sid Meier. After a while, Reynolds branched out more and more to do his own thing, including leaving Meier’s company, Firaxis, and starting Big Huge Games in 2000. For his whole career, Reynolds focused on PC strategy games. But at Zynga, he veered off into casual games such as FrontierVille and CityVille 2. Now he and Train are back doing strategy.

The new mobile strategy game lets players lead their own civilization from the Stone Age to the Space Age. They can evolve their civilization, build a single fortress, and conquer others in single-player campaigns. They can join clans and fight others in asynchronous multiplayer, where one player attacks another’s fortress while the other one simply sets up defenses and watches the battle unfold. That part of the game is a lot like Clash of Clans.

Above: DomiNations has pretty 2.5D art.

Train demoed the game to me yesterday. It covers the whole span of human history, and it has a cartoon art style, which is more accessible to wider audiences. But it also has a lot of strategic depth that hardcore gamers will like.

With DomiNations, you have more tactical options than in Clash of Clans.

You can choose among different civilizations, including the British, Romans, Chinese, Germans, French, Japanese, and Greeks. Each has its own unique abilities. You have to manage your food and economy while training troops and hiring mercenaries to colonize neighboring civilizations.

You can progress through different ages, including Dawn Age, Stone Age, Bronze, Iron, Classical, Medieval, and Enlightenment. After launch, Big Huge Games will release the Industrial Age, where you get access to weapons like tanks and planes.

You can get a rare resource, Diamonds, only by attacking other players. To win a Diamond, you have to defeat the enemy within a first minute of play. (Battles last a mere 3 minutes, 30 seconds). That means you have to destroy the enemy’s Town Center. If an enemy has a particularly deadly building, you can lock it down for a time with Sabotage.

Your clan can help you out by lending you soldiers from different civilizations. That enables you to combine Alexander the Great’s heavy cavalry with the Japanese samurai. Such combinations could help you defend your base or assault your enemy’s fortress. Altogether, there are a couple of hundred types of units and more than 100 buildings. It has some cool units, like rampaging war elephants.

In contrast to Clash of Clans, DomiNations has more army on army combat, he said. It isn’t a two-way real-time battle, with synchronous live gameplay. But it is much more interactive than other games. 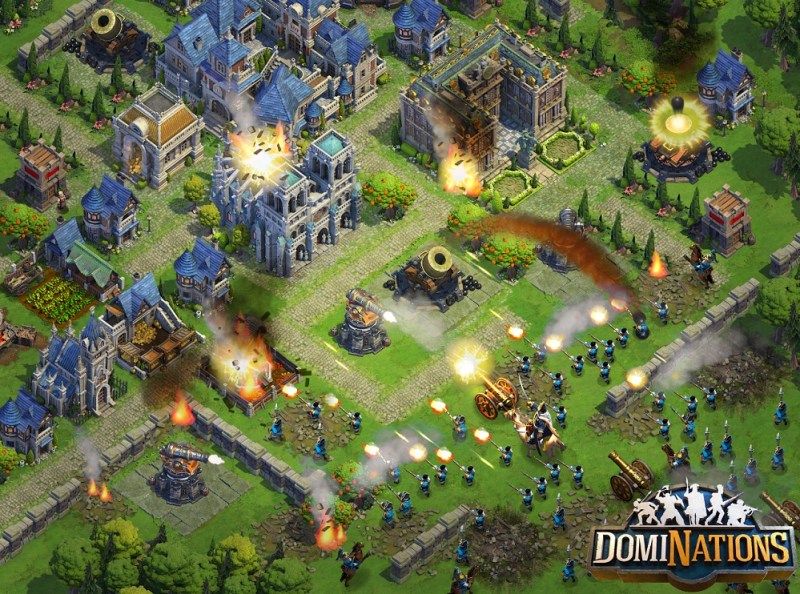 While you spend a lot of time attacking players, you also have to set up your base. The layout of your guns, walls, spawn points, and buildings matters a lot, Train said.

The player’s defense is automated, and it revolves around where the player puts defensive guns and spawn points for soldiers. A lot of the strategy comes in deciding what assets to deploy first — cannon, cavalry, or infantry — in the hopes of drawing the enemy out. Once you dispatch the enemy’s ground pounders, you can deploy your cannon. Then you can take out the walls and start knocking out enemy buildings. You can’t control individual units, but you can set rally points every 30 seconds or so. When you do, your troops will converge on the rally point and attack whatever is there. Periodically, the defenders spawn soldiers, until you destroy the spawn points.

If you succeed in conquering an enemy’s base, you can get more resources to build troops and fortify your own base. The single-player campaign leads players from the Fertile Crescent to the Napoleonic wars. You can activate one general at a time, but you can attain up to four. You get more over time, and those will influence battles in different ways.

“We’ve built DomiNations from the ground up to combine the in-depth strategy gameplay we’ve been creating for over 20 years with a fast, fun, and tactical experience customized for mobile devices,” said Brian Reynolds, creative director for DomiNations, in a statement.

You get a gold bonus if you connect your buildings to roads. That helps your economy. But it makes your cities harder to defend because it expands the territory that must be defended. You can create Wonders of the World, like the Hanging Gardens, which gives a bonus for surrounding fruit trees.

A big bet for Nexon

Above: A Japanese faction base in DomiNations

DomiNations is an important game for Nexon, which has commissioned a lot of Western mobile and PC games from studios such as Shiver Entertainment, Envision  Entertainment, and Turbo Studios. Nexon wants to become a global gaming giant, which means it has to expand from Asia to the West. If it succeeds, Nexon and Big Huge Games will win at their own version of DomiNations in the strategy battles of the game industry.

“Big Huge Games is ushering in the next generation of mobile strategy games with DomiNations, offering players an unrivaled amount of strategic choices and gameplay depth,” said John Robinson, the general manager of Nexon M.

Nexon has been particularly good at monetization, and DomiNations uses some familiar monetization features. It’s free-to-play, but you can purchase virtual currency, or crowns, with real money to speed up the development of buildings or other items.

DomiNations is slimmed down from strategy games like Civilization. You won’t fight enemies across a giant map. You select enemies to attack from a kind of big soup, rather than going after your neighbors as you do in titles such as Boom Beach. It has no cooperative play or user-generated content. And right now, you only get one city.

Of course, this is a mobile game, and Big Huge Games can always expand it in the future if it’s a hit. The game has been available in some territories for a few months, and the retention of users has been good, Train said.

Like other things Reynolds and Train have done, DomiNations is certainly ambitious. It remains to be seen if Big Huge Games has cracked the code on mobile, and broken the grip of Clash of Clans.