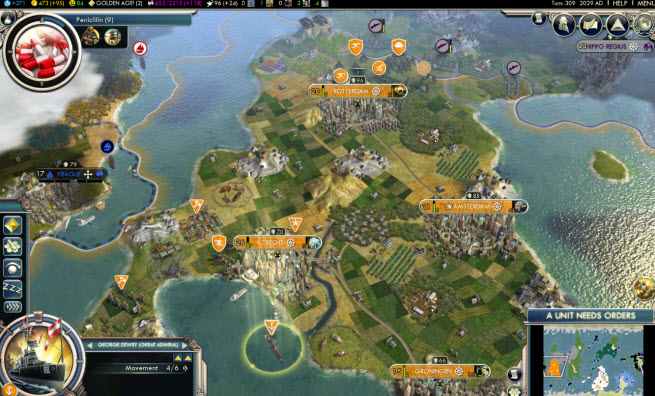 <When the Firaxis guys create an expansion, they go the whole nine yards. The upcoming Sid Meier's Civilization V: Gods & Kings expansion has a bunch of additions that will motivate fans to return to the game that debuted way back in September 2010. 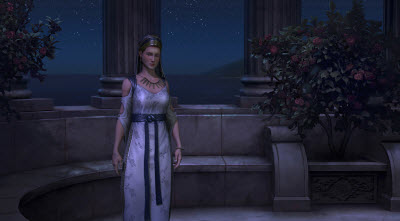 The new expansion for the PC game finally debuts this spring with features such as religion, espionage, improved combat, and new city-states. We got a briefing from Ed Beach (pictured below), project manager at Firaxis, on the details behind the intricate strategy game. As Civ fans know, those details can keep you engaged for hours and hours.

“It introduces a whole bunch of new items,” Beach said. “But our most exciting changes are in the revamped game play with religion and espionage.”

The game has nine new civilizations (Carthage, Netherlands, the Celts, the Maya and Byzantines among them), nine new leaders (William I, prince of Orange; Boudicca of the Celts; Dido of Carthage [pictured right]; and Pacal the Great of the Mayans). The leaders actually speak in their original languages. It has 27 new units including Great War combat units, religious units, ranged units and unique units for each new society. And it features nine new Wonders that will wow your citizenry. There are now 34 civilizations in the game.

At the start of the game, you can now earn faith points to let you progress down the path of religion. The Celts in particular can earn faith from the forests around their cities and their Pictish Warriors earn faith by being successful in combat. You can also earn faith discovering ancient ruins, construction buildings such as cathedrals, and building religious Wonders. 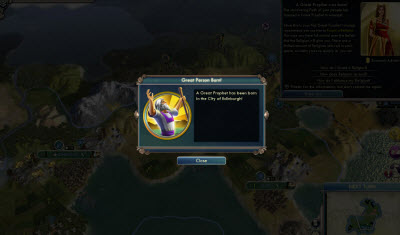 Once you get enough faith, you can create a Pantheon of the Gods and choose a belief. If you are the first to found a Pantheon, you can lock out other players from choosing the same belief.

“It’s a race to get to the belief faster than the other civilizations can,” Beach said.

Then you can star earning points toward a Great Prophet (pictured right), who can enable you to found a new religion. You can then combine more than one belief into a set of beliefs for your individual religion. Then you can add a belief that pays off when you spread your religion and you can add a Follower belief that benefits each city that follows your religion. Religious cities can exert pressure on the countryside as far as 10 tiles away.

You’ll get a kick out of it if you can engineer the spread of a successful religion. But there’s a hazard; if you reach the Renaissance and science becomes popular, the power of your religion wanes. Before that happens, you’ll want to take advantage of your holy warriors to wage successful jihads. 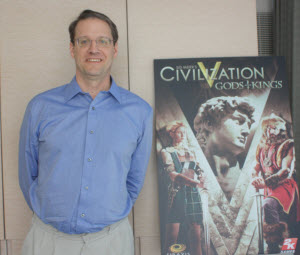 The new civilizations such as the Dutch are a nice touch. They thrive in trade and can use a new privateer unit that can raid coastal cities and steal wealth from them. They’re particularly good at taking marsh land a building dikes that convert it into fertile farmland. They can develop polders that generate extra food and tulips that can be traded.

The city-state system has been revamped. You can bully city-states by moving military units near them. That may cause them to dislike you, but result in good gifts. You can satisfy quests for the city-states to win their favor, such as taking out barbarians nearby or attacking their enemies.

Among the new city states is Tyre, a mercantile state that can create jewelry. Associated with city-states is the new system of espionage. You can create a spy that can build up credibility inside a city-state and pull off a coup. The longer you wait, the more influence the spy has and the greater the probability of success of a coup. If you fail, the city-state will execute the spy and hate you. But if you succeed, you can turn a city-state from an enemy to a friend. Spies can also intercept valuable information while embedded in another civilization, such as the society’s intentions towards you as a friend or foe. And yes, the British get a spy named James.

“You can find out that someone plans to attack someone else, and then you can trade on that information,” Beach said. 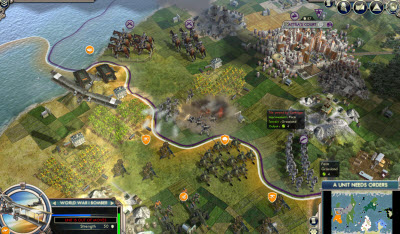 The combat overhaul moves from a 10 hit point system to a 100 point system, which slows down combat and adds more flexibility. It means it takes longer to kill an individual units.

Battles will take longer, allowing more time for battle lines to form and for units to be pulled back and substituted. The naval combat units now have both melee and ranged features. Melee units can raid cities and even capture them.

The military units now include World War I era tanks, planes, machine gunners and artillery. Overall improvements include faster gameplay compared to the previous version. But it remains to be seen how popular this expansion will be. It is long overdue. Fortunately for Firaxis and publisher Take-Two Interactive, when it comes to civ strategy games, there is nothing better than Civilization V.