Not every game can measure up to Clash of Clans. Supercell, the maker of some huge hit games, has taken the tough decision of shutting down its next game, Smash Land. 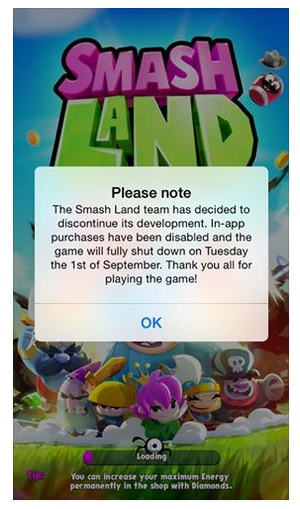 Supercell has had the rare golden touch with mobile games, as its Clash of Clans is No. 1 on the top-grossing charts, Boom Beach is No. 6, and Hay Day is No. 16. But even a champion hit maker can’t come up with a breakthrough game every time.

Supercell announced on a forum that it has “taken the difficult decision to end Smash Land’s development.” Any other company would have fully launched the game and let the market decide. But Supercell has only about 150 employees, and it is ruthless about killing games that aren’t living up to expectations. The company celebrates when it shuts games and team members talk about how they learned from the process.

“Despite its popularity and positive feedback from players, it was proving difficult to reach the high standards set by our other games,” the company said. “We did not want to continue for the sake of continuing as that is not the Supercell way. We won’t be accepting any new purchases from today (Wednesday 1 July 2015) and the game will fully shut down on Tuesday 1 September 2015.”

The message from the Smash Land team added, “These decisions are never easy, but we feel it is best to learn from what didn’t work, move on and put our efforts into making better games for you.”

The title was criticized as being a clone of Monster Strike, a wildly popular game in Japan. You basically pull down and fire to shoot cartoon characters at targets. Supercell had been testing the game in Canada and Australia, but some sharp observers discovered the game before it was announced, and it became popular.