Shawn Young has a class full of warriors, mages, and healers. Warriors get to eat in class, mages can teleport out of a lecture, and healers can ask if an exam answer is correct.

But this isn’t some Dungeons & Dragons-style fantasy. This is education as it’s happening for over 7,000 kids in more than 25 countries right now. Young, a high-school physics teacher, has been developing and refining Classcraft, his classroom-based role-playing game for the past three years, and he says it creates a collaborative and supportive learning environment that can help turn around students who are failing.

Currently a free service, Classcraft will introduce a pay structure this fall that embraces the free-to-play model more commonly seen in mobile apps and online games like League of Legends and Runescape. It’s going to turn heads in an education system used to strict budgets and paying per-head for software solutions, especially when they realize that the students will be buying gear and pets for their Classcraft avatars on iTunes.

If you’re a gamer, being in Shawn Young’s physics classroom sounds like a blast. At the start of class, his students come in and check their stats on the screen projected at the front of the room. When the bell rings, its time for a random event, which could impact one or more players. It might be a disaster, like a pupil’s game character dying, or it could be something goofy like someone getting up to sing.

This helps focus the students, Young told GamesBeat during a video call, as “the second they get into class, they want to know what’s going to happen.”

Above: The different classes in the game balance to encourage teamwork.

As the lesson progresses, Young will dish out experience points for good work and collaboration and will give hit damage to students who lack focus or misbehave. Students can gain powers specific to their character class by levelling up, and they can use these to help and protect their teammates (or themselves), activating them live as events that unfold in the classroom.

The teacher can track all this activity in Classcraft, or, as in Young’s case, the kids can use their laptops to interact with it in real-time. Come September, they’ll be able to use their smartphones to keep up with the game too, with an iOS app set for release and an Android version to follow.

As the Game Master, Young’s students are playing by his rules, but the chance to turn things in their favor is always there. Some powers have potent individual and team effects, and the students can get pretty creative with them.

“There’s one power, Teleport, where you can leave the class for 2 minutes,” says Young, “so they’ll stack that and leave for 10 minutes. That kind of annoying, but at the same time it’s part of the game.”

Some kids also used the warrior’s power to eat in class as an excuse to bring in a chocolate fondue.

Young admits that the rewards on offer in Classcraft are often outside the normal rules of school, but he says that’s what makes them so appealing. “I’m like, OK, I’m cool — this is hilarious,” says Young. “It goes both ways. As the Games Master, you buy into that, [but] then when they die they get these horrible consequences.

“For them, their real life is going to school. And Classcraft is successful and significant because these rewards and punishments are significant for them.”

If a pupil’s hit points run out, they die. They then face a punishment that a roll of the die determines, which can include detention or copying out a five-page text.

“Typically, they’d be like, ‘Oh, you’re mean, you’re giving me detention,’ and try and get out of it,” says Young. “Now, they’re like, ‘This is the game, it’s cool, I’ll go.’ You don’t even need to check if they’re going. They’re definitely going.”

“Students don’t typically respond happily to punishments. But they are. It’s weird.” 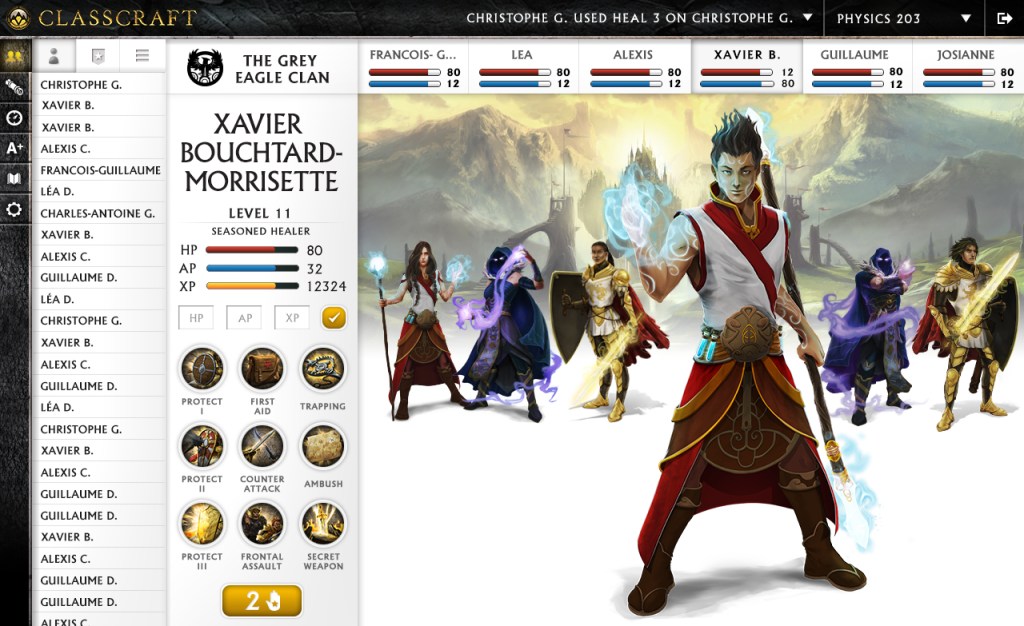 Above: Students will be able to purchase items to customize their in-game avatar.

Transforming the classroom through collaboration

Young had the Classcraft idea in his head for several years before acting on it.

Before making it, he tried various ways of getting kids to collaborate better in class, something he believes is important in a 21st century that’s proving a boom time for sharing, not least through social media.

“I did some other experiments before where kids would work in teams and get the worst grade of the four people in their team,” says Young. “It was a little too hardcore. [Laughs] A little too directly relating to their grades, so some of them felt it wasn’t fair.”

Going after that group mentality is key for Young, though, and he doesn’t think the education system values it enough. “Our whole system of [pupil] rewards is based on individual assessments,” he says, “and that’s not useful for them. What’s useful for them is seeing the value of your team succeeding as opposed to yourself, working together to make your collective level go up.”

Young points out that when somebody dies in Classcraft their whole team gets punished by losing hit points. “The game is very finely balanced — risk versus reward,” he says. “There’s a collective risk of somebody dying, but at the same time there are all these incentives to collaborate. That really transforms the classroom.”

Ricardo Higuera teaches seventh grade world history in a rural corner of Southern California called Thermal. Nearly all the students in his middle school are eligible for free or reduced school lunches. Higuera’s been trialling Classcraft for the past 4 months and he’s thrilled with how it’s making his students care about their grades.

“Academically, I have noticed quiz scores and class-participation increase,” Higuera told me via email. “Before, some of my more apathetic students wouldn’t care if they failed a quiz. Now, they’re more wary to because they know it affects their character’s level and team standings in the game.”

Classcraft has also helped with the flow of his lessons. “I pride myself in running a smooth, ‘fun’ classroom even before Classcraft, but I’ve noticed a huge tick in the pulse of the class since we began the game,” said Higuera. “Because our passing periods are notoriously short, I had a slight tardy problem — with some groups more than others — but now I have kids rushing to get to class on time.” 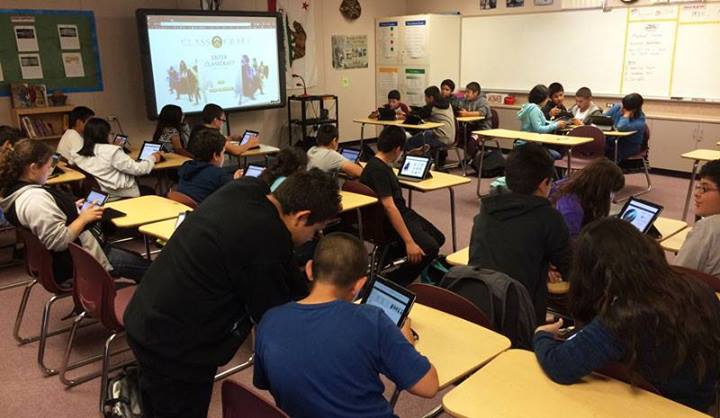 So far, Higuera is the only teacher in his school to try Classcraft. Some of the other staff are unsure of what it actually is and how to make it part of their teaching. Being the Game Master is a big part of that.

“The game, like anything else in education, depends on how it’s used by the teacher,” said Higuera. “Like role-playing games of old, the game depends a lot on the Game Master. He or she holds the power to engage players and make the game come alive.”

Higuera already thinks Classcraft will be part of his teaching arsenal for years to come.

“I do think Classcraft is ideal for the age group and subject matter I work with,” he told me. “Middle school, medieval world history … I mean, how cool is that — to play a World of Warcraft-like game as you’re learning about samurai, knights, and the Aztecs? I’m like a kid all over again, playing Dungeons & Dragons with my friends.”