Young doesn’t have any quantitative results to share yet, but many teachers using Classcraft are reporting success. “We have some really surprising statistics,” says Young. “We have teachers saying their class averages have gone up 20, 25 percent in the months following implementing Classcraft.”

He puts that down to an increase in engagement due to three factors: offering significant rewards, providing a continuous feedback cycle, and encouraging a classroom dynamic rooted in collaboration.

“The first year I did this, I started it mid-year,” says Young. “I had two guys that hadn’t been working at all; they were seriously failing. The second Classcraft got into the class, they started working like crazy. Like a lot — abnormally a lot — because they wanted to level up. That was surprising because grades weren’t an incentive for them, but performing in a game was.”

Despite their terrible start, those two kids actually passed the year.

“I have kids who would never have talked to each other who are helping each other out after school,” says Young, emphasizing the teamwork that Classcraft encourages. “The game is built to reinforce what makes you a good learner. Participating well in class, doing your work, collaborating. It really rewards that. That’s how you level up in the game.”

Classcraft permeates every aspect of school for Young’s students. They get XP for doing well in sports or helping each other after school. They even tidy the classroom in the hope of levelling up quicker. “They become obsessed with becoming a better learner,” says Young. “They just don’t know about it.” 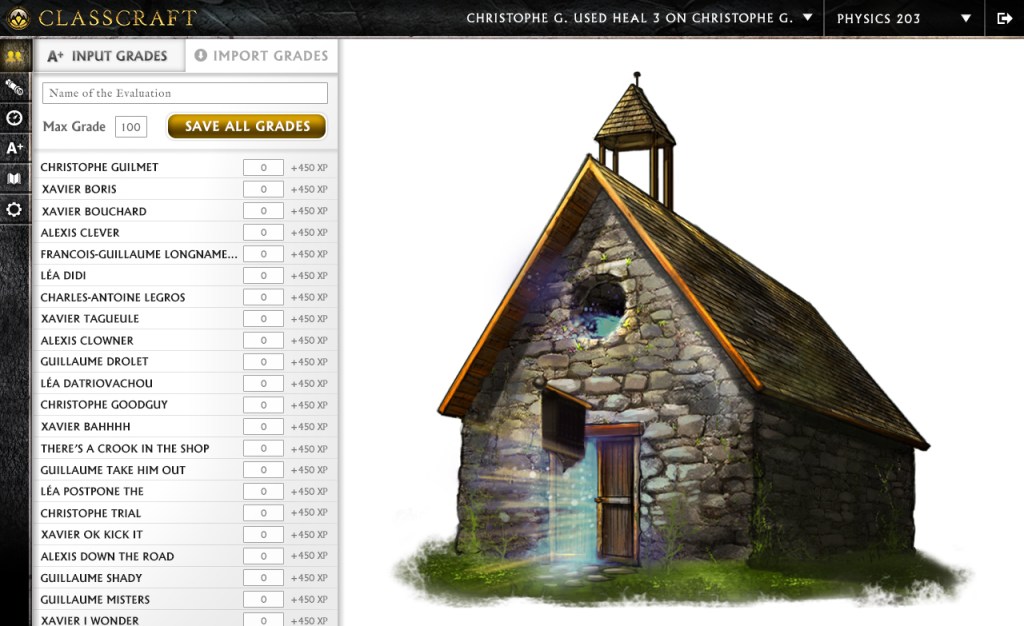 Above: Classcraft has improved pupil grades and attitude to learning in many schools.

Carrot on a stick

Not everyone is fully convinced of Classcraft’s merits as an educational motivator. I spoke to Frank Noschese, a high school physics teacher from Cross River, N.Y., who has a different take on gamifying the classroom.

“I don’t really look at competition as a good thing in the classroom,” Noschese told me over Skype. At least, he believes, not when kids are striving to earn rewards in a game. “You do the work to do better at the game rather than do the work to learn the material,” he said. “It sends the wrong message that it’s not the learning that’s important but the game aspect.”

“It’s very behaviourist. Training the kids to do what they’re doing because they get a reward.”

On the kids that aren’t intrinsically motivated by getting good grades, Noschese says that “there’s something else going on. And I don’t think that laying a game over the classroom is really going to fix that scenario.

“There’s some kids that just can’t be in building, shifting through nine different classes for six hours a day, sitting in their seats. They need a different schooling experience.”

Noschese thinks that teachers can make class “way more engaging” without turning it into a game. He says that his subject, physics, is “really cool just of itself,” and describes using a video of NBA star Kobe Bryant jumping over a pool of snakes [embedded below] to spark a lab-based session where students try to answer the question, “Is it real or is it fake?”

Despite his reservations about Classcraft, Noschese says he doesn’t want to fault Young for trying something new: “Any teacher that’s willing to try something new or change their craft is great.”

“At this moment were having our team of illustrators draw a thousand pieces of gear,” says Young, outlining the freemium model that is one of three options the game is adopting this fall. “Boots, magic, shields, potions.” As students level up, they’ll get gold coins as part of their reward. They can use these to customize their character’s look.

And interestingly, they’ll also be able to buy these coins through the iOS app and on iTunes.

Young knows this is a huge move for an educational product. “It’s very, very innovative,” he says. “I don’t know any products that do that for education.”

I asked Young whether there would be a cap on the amount of money that students could spend. “They cant spend that much money,” he said. “After $5 or $6 it doesn’t make sense to spend money.”

But the very idea of kids paying for an educational product may raise eyebrows. “That poses, for some teachers, a certain ethical dilemma of do they want to bring a product into their class that is soliciting kids to spend money?” admits Young.

So, for teachers and schools who aren’t happy with that principle, Classcraft will have a premium version charged at a rate of $4 per student per year. That way, pupils can still access the customizable features, but it will be the teachers who hold the keys to the gold.

There will still be a free version of Classcraft without microtransactions available come September, but this will be miss out certain features. It won’t have customizable avatars, pets, iOS app support, or interactive class forums. However, the base game will still be fully functional.

The idea of offering a freemium pay model is, at its core, a challenge to the school budgeting system and a way of making Classcraft available to all, according to Young.

“I’ve been teaching for seven years,” he says, “and for me, one of the main annoyances is this bureaucratic stopper on innovation that comes from, ‘Oh, sure, we’ll put that in the budget for next year,’ even though you have your great idea right now.”

“For me, it was important that teachers hop on and just start playing whenever they wanted. That’s when that freemium model was born. We have teachers [playing Classcraft] in China and India and Namibia. A lot of these premium education products are only available in the U.S. and Canada. It was really important that we were available for these poorer countries. That a teacher who wanted to start playing just could.”

For Higuera, the free-to-play or freemium pay models are the only way his class can keep using Classcraft.

“I would love to say my principal would purchase the premium access for us,” he told me, “but he won’t. Not enough of our teachers would use it to make it viable. And I doubt I could afford to pay out of my own pocket.”

Higuera thinks his students will love the opportunity to customize their characters, but doubts whether many will actually do it. “Some will, but not many,” he told me. “And I worry that some who would like to won’t be able to because of the stark economic reality of poverty.”

“Classcraft is cool, though,” said Higuera, “and I hope to continue using it next year and in the years to come. So long as I, no, we can afford it.” 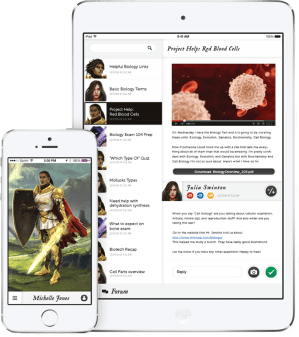 Above: A Classcraft iOS app is due out this fall.

This fall is a big deal for Young and Classcraft. The game originally launched in February — not the best time of year to embark on a new educational initiative.

The iOS app due in September will enable the whole system to run on a teacher’s iPad and will give students more immediate ownership of the game. German and Spanish translation will add global appeal to a system which Young says he always intended being an international concern.

Students as young as 8 and as old as 20 are already playing the game, their number only looks set to increase with Classcraft’s streamlining efforts. And the free-to-play business model will permit any teacher, in any country, to jump into the game, regardless of school budgets.

While it doesn’t offer an across the board solution to engaging kids in education, it does provide an innovative and unique way of capturing those pupils that might otherwise shrug their way through school.

“Video games, in a very short time, have become this common cultural reference point that everybody knows,” says Young. “Everybody plays games; everybody likes games.

“For students whose grades are suffering because they’re not engaged or they’re not motivated. I think that Classcraft can really make a difference.”