When it comes to attracting the gaming public, big-name console manufacturers are looking to nostalgia as much as they are to online services and flashy peripherals. Just in the last few years, Nintendo, Sega, Sony, SNK, and others have thrown simple circuitry into a cute plastic shell to make players reminisce — and open their wallets.

As one of those individuals who yearns for the days of bits and beat-’em-ups, I have a nearly unhealthy fascination with the retro revival and all the products that have come with it. The thing is, only a few of these devices live up to their ancestors. Some of them, quite frankly, might give you the desire to let the past die. So, which ones are worth the money?

Before I go into this ranking, it’s important to mention that none of these classic consoles have an all-encompassing list of games. So, don’t go in expecting to play everything that you remember. 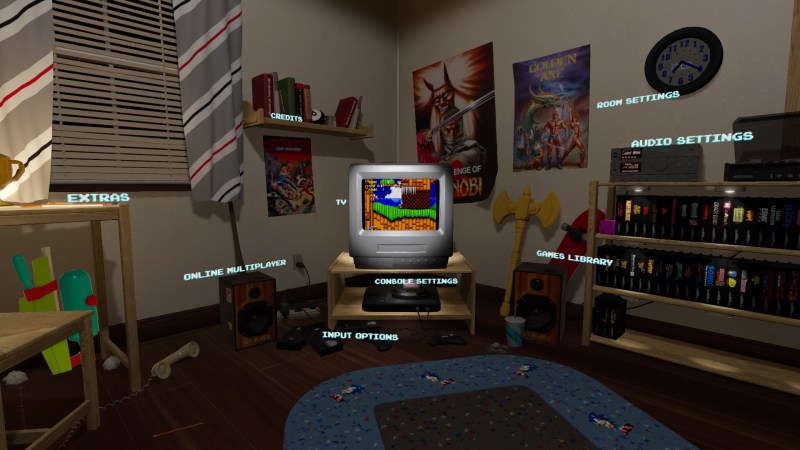 Above: The Sega Genesis Classics collection is worth your time.

If you really want to check out a specific game, your best bet would be to see if it has a PlayStation Network, Xbox Live, or Nintendo Virtual Console/eShop release. Also, a number of companies, including Sega and SNK, have released compilations that feature many old-school titles. The Sega Genesis Classics collection (available on PlayStation 4, Xbox One, and Nintendo Switch) is a great example.

One more thing, the only minis I’m going to go over are ones in my personal collection, so let’s get to it.

The kings of the classics

The Nintendo “Classics” might not have pioneered the mini-console craze, but they turned it into a full-blown phenomenon. When the Japanese gaming giant decided to come out with miniaturized tributes to their Nintendo and Super Nintendo Entertainment Systems, the world took notice. And it stood in line with cash at the ready. Now, nearly every gaming aficionado has a Classic, or they’re looking for one.

Both the NES and SNES Classics are incredibly similar. They feature a compact form factor, lovingly recreated controllers, intuitive interfaces, and terrific video output. Games look wonderful and play without much input lag (this will vary, depending on the television). You can also apply filters to get that tube-TV aesthetic — if you’re into that. Save states for every game are available as well. 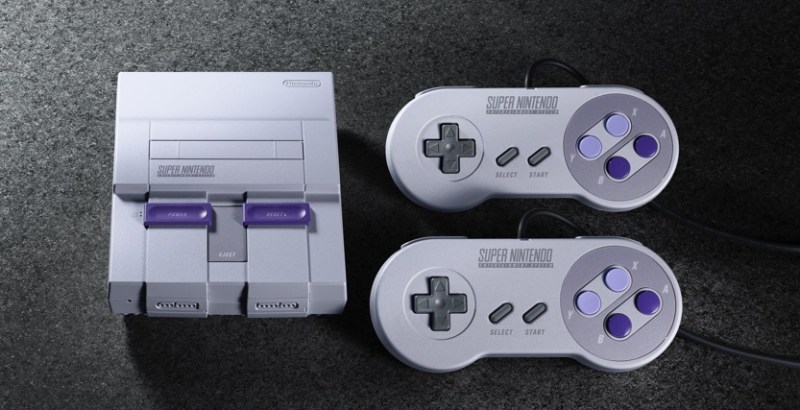 Above: The SNES Classic takes you back to the early ’90s.

But what really makes these models shine is the game selection. And, for me, that’s why the SNES Classic is king. While it offers fewer titles than its NES big brother, the library here is incredible. Super Mario World, F-Zero, Contra III: The Alien Wars, Super Metroid, Final Fantasy III (VI), The Legend of Zelda: A Link to the Past, and Street Fighter II Turbo are just some of the highlights. As an added bonus, Nintendo went ahead and included Starfox 2, which never saw an official release until the SNES Classic hit store shelves.

These 16-bit experiences hold up better than many other older games. Just think about all the pixel-art indie titles out there. Where do you think they found their inspiration?

Really, the NES Classic deserves to be at the top just as much as its SNES counterpart. While the SNES edition offers deeper gameplay and more technically impressive titles, the NES Classic is packed with iconic releases that ushered in a new dawn for gaming. The original three Super Mario titles, the first two Legend of Zelda games, Castlevania, Kirby’s Adventure, Ninja Gaiden, Punch-Out, and Mega Man 2 are some of the favorites that made the cut here. 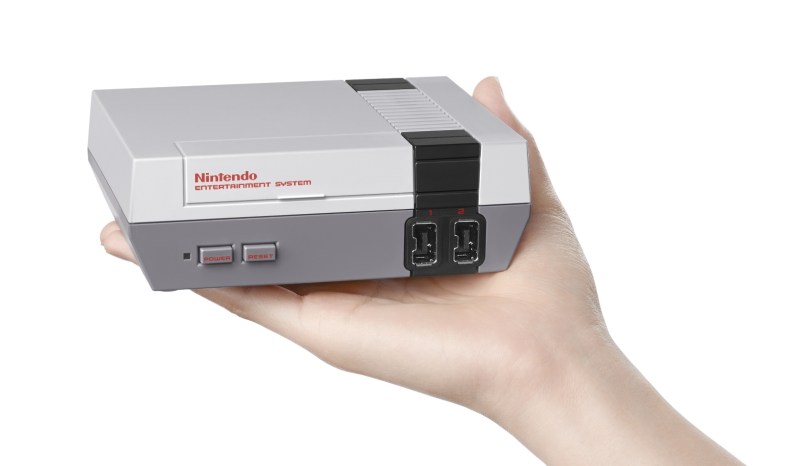 Above: The NES Classic is a mini marvel.

The NES Classic features the same top-notch build quality and features as the SNES version. The one big difference here is that it comes with one controller, not two. If you want to play with someone else, however, you’ll need to hunt down an extra gamepad — which can be just as difficult to find as the console itself. This does make the core package a little cheaper, and you can use an SNES Classic controller if you happen to have one lying around.

When I heard that SNK was making a mini-Neo Geo to celebrate the console-arcade hybrid’s 40th anniversary, I rushed to the first preorder page I could find. The final product itself might be the coolest device on this entire list, but it might just be the most infuriating.

The Neo Geo Mini has a comprehensive game list that should satisfy most fans of the original hardware. SNK initially released two minis: one for Japan, and an “International” version for other territories. Most of the games overlap between the two, but each mini has its own exclusive offerings. Personally, I found this frustrating because certain games that I wanted ended up only on the Japanese unit.

Regardless, among the Neo Geo Mini’s 40 games, you’ll get to play a slew of Metal Slug and King of Fighters titles, the remarkable Garou: Mark of the Wolves, Shock Troopers, Blazing Star, and the criminally overlooked Last Blade 2. The Neo Geo library (and, as a result, the Neo Geo Mini’s selection) has a heavy emphasis on fighting games. So if you’re not into that genre, you should probably move on to something else.

The Neo Geo Mini device is different than most tribute consoles because it has its own LCD screen and arcade-style controls. This makes it a rather striking addition to any player’s collection. While it’s fun to play these games on a tiny arcade cabinet, the novelty wears off quickly. And it’s worth noting that the stick has no gate or microswitches, so you’re basically playing with analog-style controls. This is less than ideal for the precise, arcade nature of Neo Geo games. The unit is perfectly playable, though, and the screen’s quality is surprisingly good. But I’d rather hook the console up to a TV, where I can have a more comfortable gameplay session.

And that’s where the Neo Geo Mini really falters. The video output is flat-out disappointing. I can only tolerate playing with the “image quality optimization” filter enabled, which gives the video an overly smoothed out appearance. I really don’t like the way it looks, but it’s even worse when I turn it off.

Also, I paid for one of the gamepads that SNK released in conjunction with the Neo Geo Mini, so I could get the most of my TV play. These look nearly identical to the Neo Geo CD pads that came out in the ’90s. But the new controllers don’t feature the satisfying microswitches from the CD system D-pads. To be blunt, the Neo Geo Mini controller is a letdown. The D-pad feels vague, and it’s an ever-present distraction when I’m playing. And for some reason, SNK changed the order of the buttons, so that adds an unnecessary layer to my aggravation.

Because it has its own screen, the Neo Geo Mini is actually a little more expensive than its classic colleagues. And you’ll have to spend more money if you want one of the gamepads. Overall, the Neo Geo Mini is a great idea with an equally great lineup of titles. SNK screwed up in the execution, however, and it failed to provide fans with the value they deserve.

Still, this little thing has plenty of style (just like its library), and if you’ve always wanted a Neo Geo, maybe it’s worth a shot.

This is the quirkiest console on the list, thanks to its random, yet unmistakably charismatic, selection of titles. Retro-Bit released this device as a follow-up to its Generations plug-and-play mini-console. The Retro-Cade has a somewhat spartan design and comes with two basic, yet solid, controllers (although, I wish the buttons and D-pad were less stiff).

Like I mentioned earlier, the library of titles here is all over the place. You’ll find arcade brawlers like Double Dragon from Technos and Capcom’s fantastic Armored Warriors. You can jump into vertical shooters like 1942 and Varth. Or horizontal shooters like the wacky arcade romp Boogie Wings and R-Type III for the SNES. If you want puzzle games, you can check out multiple Magical Drop games. Oh, and even the obscure, Castlevania-like Holy Diver for the NES is here. 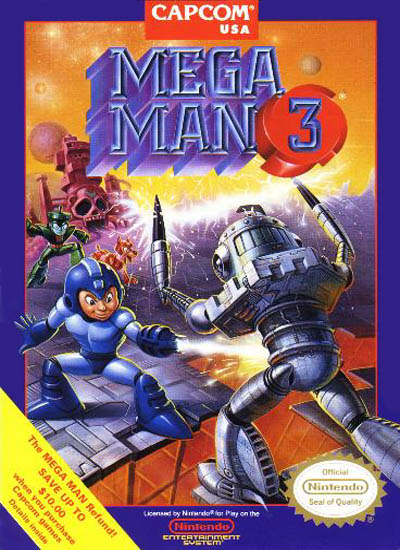 Above: Yeah, Mega Man 3 is on the Retro-Cade.

The Retro-Cade’s interface is straightforward yet serviceable. You can adjust the video settings to display a stretched or original aspect ratio, but the games themselves look a bit too soft, with muted colors. Apparently, an updated version of the console is now available that lets you disable the smoothness filter, resulting in a crisper image. The “version 1.1” Retro-Cade also comes with a revised game list that includes titles like Crude Buster. But I’ve only had the chance to experience the original device.

Also, when using the Retro-Cade, I had to put my TV into game mode to get less input lag. This is the norm for most modern televisions when using gaming devices, but with some of the other consoles (like the Nintendo Classics), it wasn’t as big of a necessity.