Ever wonder what the gaming world would be like without pirates?

That future isn’t too far away, thanks to the advent of cloud-based gaming services like Otoy, OnLive and Gaikai.

Cloud-based gaming companies run video games on very powerful remote computer servers and then stream the game like a YouTube video to a computer. If a gamer has a half-decent Internet connection, they won’t notice a difference in quality between playing on a remote cloud server or using their own computer or a home console to power a game.

If those companies have their way, gaming will only exist in the cloud in the future.

“We’ll be there in 10 years — if that,” said OnLive’s CEO Steve Perlman (pictured above).

That means that hard copies of games and digital downloads will become a thing of the past, along with retail stores like GameStop. And because they only live in the cloud, it will be almost impossible to steal those games and distribute them on the Internet for free.

Currently it’s not that difficult to “crack” a copy of an existing game — like, say, Call of Duty: Black Ops — and create an “image” of the game for a tech-savvy gamer. Individuals can then distribute that image across the Internet, and anyone can play the game for free if they have the proper software to run the image. It’s even easier to steal games for mobile devices. Stealing games for the iPhone is a little more difficult, because gamers will have to jailbreak their phones, but Android users don’t even have to do that.

“Piracy in the mobile space is rampant, it’s 90 plus percent for something like Angry Birds,” said Rob Wyatt (pictured below), chief scientist at Otoy — another cloud gaming provider. “It’s even easier for games built on WebGL and HTML5 — every texture, shader and asset is loaded as a separate file, so it’s easy to find the file and download it.” 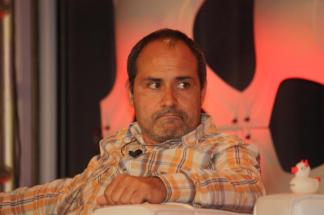 It’s especially true internationally, where game piracy runs rampant. Angry Birds is one of the most pirated game in China, said Rovio’s head of global brand advertising Wibe Wagemans. International companies also have a tendency to “rip off” content and art from those games because it’s easy to break into a game and modify the content, he said. Those developers then publish a very similar game and distribute it, and usually end up making a good bit of money, he said.

Cloud gaming companies had a chance to come to prominence thanks to the recession, Wyatt said. The recession tightened the budgets of gamers everywhere, and that delayed the advent of the next console generation, he said. Had the recession not happened, the PlayStation 4 would be here by now. Wyatt would know, too, as he helped develop both the Xbox and the PlayStation 3.

“That next generation is seriously in doubt, both boxes are pretty much the same feature set,” he said. “I don’t think there’s much need for a next-generation console — you’re going to have one box, and you play it on any device like a television or a tablet.”

The games industry has been pretty civil about hunting down video game pirates.  Activision Blizzard, which employs the IP Cybercrime investigation firm, has opted to issue warnings first, for example. The tactics are different from those used by the Recording Industry Association of America, the organization that represents music labels, in cracking down on music pirates. The RIAA’s tactics are much tougher, and the organization has been vilified for going after music fans and suing them relentlessly.

Cheating in online games will also become a thing of the past with cloud gaming, Wyatt said. Most online games are populated with a small group of people who use “man in the middle” attacks, which compromise a packet headed to a game’s server that makes the character do something different. That can speed up a character’s movement or make them instantly get a headshot without having to aim.

“Because it’s in the cloud, you can’t access the network,” he said. “Spoofing packets is nearly impossible because of the speed of the transmission and because all the computing happens at the other end.”