Disclosure: The organizers at ChinaJoy paid my way to Shanghai. Our coverage remains objective.

SHANGHAI — CMGE (China Mobile Games and Entertainment) is one of those big Chinese game companies that the world has never heard of. But the company is taking some big steps in partnerships with a variety of brand owners to create memorable mobile games based on existing brands as well as new original stories.

The company is betting that Chinese gamers are becoming more mature and less tolerant of cheap knock-offs and pirated games. It wants to bring them quality games based on licensed properties with real innovation — and even brand new intellectual property. That’s very Western in its approach, but CMGE acknowledges that, as marketing costs and competition rise, it makes sense to compete with rivals via differentiated IP.

The Nasdaq-traded company held a three-hour press conference near the ChinaJoy Expo in Shanghai to show off its ambitions to become a dominant player in China and build bridges to other markets and new media. The event was held at the swanky Shangri-La downtown hotel before an audience of hundreds. The big-budget event was surreal for a mobile game company, and the only thing it was missing were the large numbers of booth babes, or showgirls, who adorn every booth at ChinaJoy. The crowd thinned out at the end, but I stuck around to talk with the top boss.

Among CMGE’s ambitious deals is a “transmedia” (entertainment properties that span multiple media) alliance with Joel Silver’s Silver Pictures, the Hollywood producer who produced movies such as Die Hard and The Matrix. CMGE will make a mobile game while Silver Pictures makes a movie based on the film. Dark Horse Comics will make a comic book version. 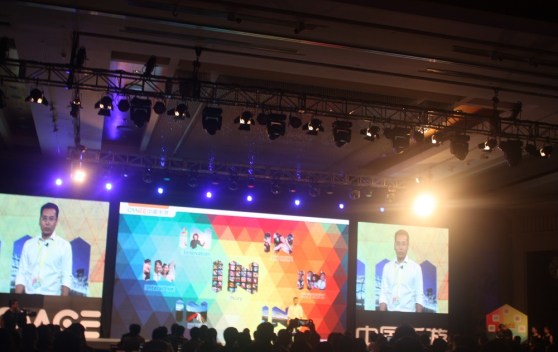 That’s part of a strategy to bring new intellectual property to China’s audiences through mobile games, said Ken Xiao, chief executive of CMGE, in the press conference. In the past, China’s mobile game makers ripped off intellectual properties developed in other countries, but CMGE is trying to put that legacy of piracy to rest. Xiao said he felt honored that so many other international companies are willing to trust CMGE with their brands in China.

Afterward, I asked Xiao in an interview about why his event took so long.

“There was a press event from Tencent that lasted three hours,” Xiao said, speaking through a translator. “But we had a lot more products to announce. That’s why we took so long.”

CMGE also created an alliance with Japan’s Toei animation to create an action card game based on Toei’s One Piece animated film series. The beta testing will start in the fourth quarter of 2014, and the game will be launched in the first quarter of 2015.

And CMGE set up a partnership with Japan’s Gree to create an official mobile version of the Naruto animation series in China. Xiao said that animation series, created in Japan, has more than 200 million fans in China. CMGE plans to do a lot of localization for Gree’s game and launch it by Oct. 20.

CMGE also teamed up with Japan’s Koei Tecmo Games to make an Uncharted Water 5 game, and it also partnered with Japan’s SNK Playmore to create three mobile games based on fighting titles Samurai Showdown II, The King of Fighters ’97, and Metal Slug 2. CMGE is moving into mobile eSports tournaments as the top sponsor in partnership with tournament company World e-Sports Cyber Games.

“Japan’s Gree is one of the most famous and brilliant in the industry,” Xiao said.

All of the partners seemed unconcerned with recent news that CMGE had to reassign a bunch of executives involved in a bribery investigation. The subject, of course, didn’t come up during the press conference. 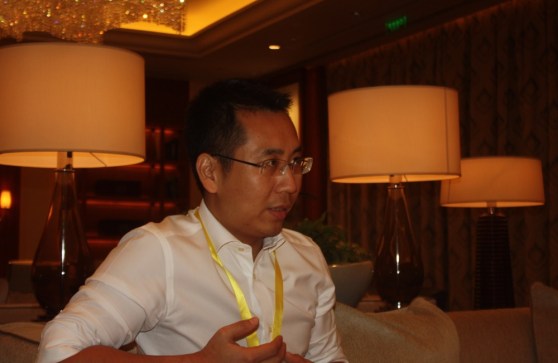 Above: Ken Xiao of CMGE

CMGE set up another partnership with Shaolin Temple, the keeper of the Shaolin monk martial arts tradition.

CMGE closed its endless event with a live martial arts demonstration by Shaolin monks. It was a spectacular display that could rival the hype machines of Western companies at the Electronic Entertainment Expo, E3, exhibition for games in the U.S.

The show business approach to the event seemed like the smart way to show off the games. Xiao said that he believes that Chinese gamers started showing their preference for authentic brands in mobile games last year, and that this shift has been fast in coming.

“This is the trend we saw with PC online games, and now it is the same with mobile games,” he said.

I pointed out that this means that CMGE will compete on the world stage with Disney, Activision, Electronic Arts, and other big brand creators. But he noted that his company’s focus will be on mobile, where the cost of investigating a new IP is lower. You can try out a mobile game and abandon it if the gamers don’t come.

If they do, you can turn it into a movie or other media. While it may take a long time to make that movie, you can generate a second or third mobile game that can be timed for when the movie finally debuts, Xiao said. If the new mobile game brand is really good, there is no reason that CMGE won’t partner with companies to take the property to film or TV.

That’s not all that crazy after all. 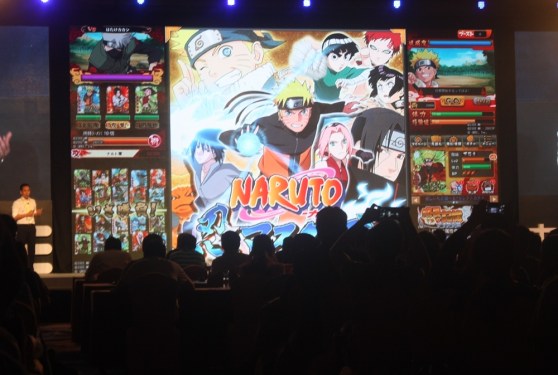 Above: Naruto brand on display at CMGE’s surreal event.