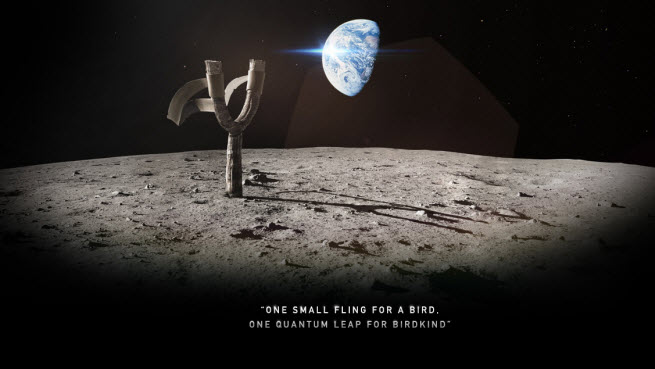 It seems that planet Earth isn’t big enough for Angry Birds anymore. The cute cartoon characters are headed into the void with the upcoming Angry Birds Space game from Rovio.

Angry Birds has been the major success story of mobile games in the past couple of years with more than 700 million downloads for the game.

For the three people unfamiliar with how the game works, you shoot cute Angry Bird characters via slingshot at some big green pigs who hide in structures that can be crushed by the birds. The game has made its way into emerging markets in a big way and debuted on Facebook this week. No game has grown so quickly and so broadly in the mass market, and Rovio is milking the success as much as it can with everything from movie appearances to plush toys.

The company says Angry Birds Space is “the biggest game launch since the original Angry Birds.” It will include simultaneous launches in mobile gaming, animation, retail, and publishing.

Angry Birds was the fifty-second game created by Rovio. The new space game will have numerous new characters, and players can expect the physics part of the game to be accurate (Vint Cerf would be so pleased). The only exception, of course, is that pigs and birds can’t breathe in space. On top of launching birds at pigs in zero gravity, the game will have a variety of other gameplay elements, including slow-motion, light-speed destruction, and other new features.

Angry Birds seems ready to enhance its worldwide presence even further this year, with this growth across the Facebook community. As it does so, Rovio chief marketing officer Peter Vesterbacka’s dream of building an “integrated entertainment franchise” akin to Disney looks to be getting one step closer.

Here is the teaser trailer: