Community Gaming has raised $2.3 million in funding to create automated esports tournaments. The company has figured out how to manage online or local tournaments, pay participants immediately, and even distribute winnings in cryptocurrenices if needed.

Community Gaming says it delivers a seamless tournament experience using blockchain –the secure and transparent digital ledger behind cryptocurrencies — for the distribution of rewards for players. The inspiration for the project comes from the experience of its founders.

Founded in New York, Community Gaming started in 2017 with a focus on hosting local area network (LAN) tournaments. It hosted more than 200 events and saw the challenges in producing grassroots gaming tournaments. And now it has created a platform for automating mostly online events for local esports tournaments, said CEO Chris Gonsalves in an interview with GamesBeat.

“This started as a passion project,” said Gonsalves. “Prior to the pandemic, we were the largest in-person esports events company in New York City. We got our start running grassroots tournaments of 50 to 100 people every single weekend. We would do bring-your-own-device events where we would provide the equipment, and we would partner with different venues. We built up a base doing that with games like League of Legends, first-person shooters, and even mobile games.”

Since the start of the year, the company has hosted more than 300 esports tournaments. 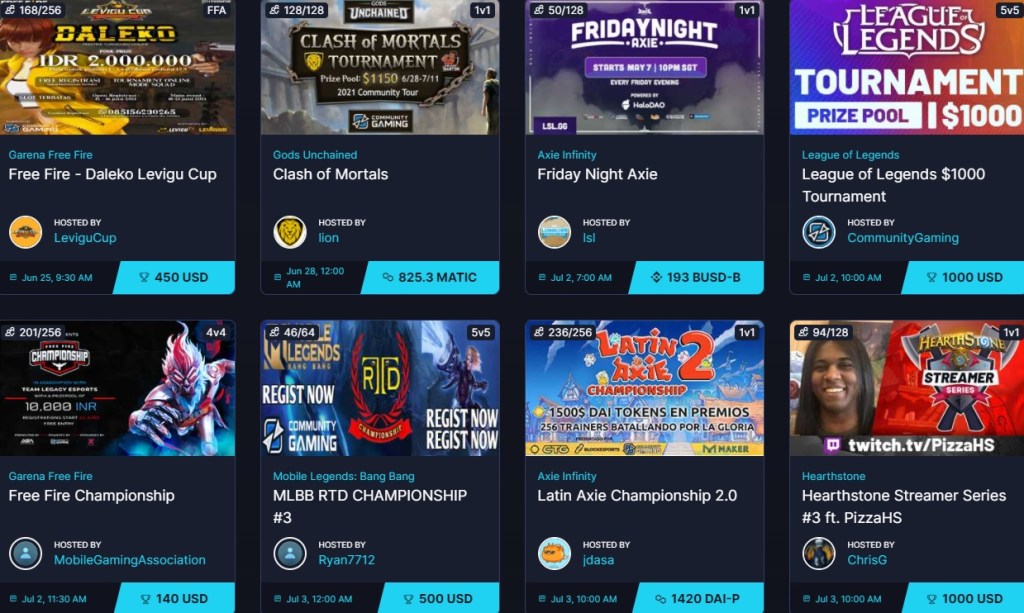 From doing so many physical and online tournaments, the company identified the major pain points for grassroots esports tournament organizers. That included registration, bracket management, and payments.

“We were frequently using three or four different fragmented platforms to do that, something like Eventbrite,” Gonsalves said.

“I think Chris and his product development was already really far ahead of what is typical for an early-stage company,” said Evan Feng of CoinFund, in an interview with GamesBeat. “That helped us become quite positive about Community Gaming, as well as its focus on community and social.”

Credit card integration facilitates fiat-to-crypto (U.S. dollars to Ethereum) onboarding with the entire experience designed to be as beginner-friendly as possible. Tournament organizers can create a tournament in less than five minutes by first connecting an existing MetaMask wallet, or alternatively, generating a new non-custodial wallet (the kind needed for cryptocurrencies) with a single click.

“During the pandemic, when all of our events were put on hold, we decided to combine those three things into kind of an all in one solution where we handled the onboarding, the ticketing and registration, and the payment processing, and the actual bracket management software,” Gonsalves said. 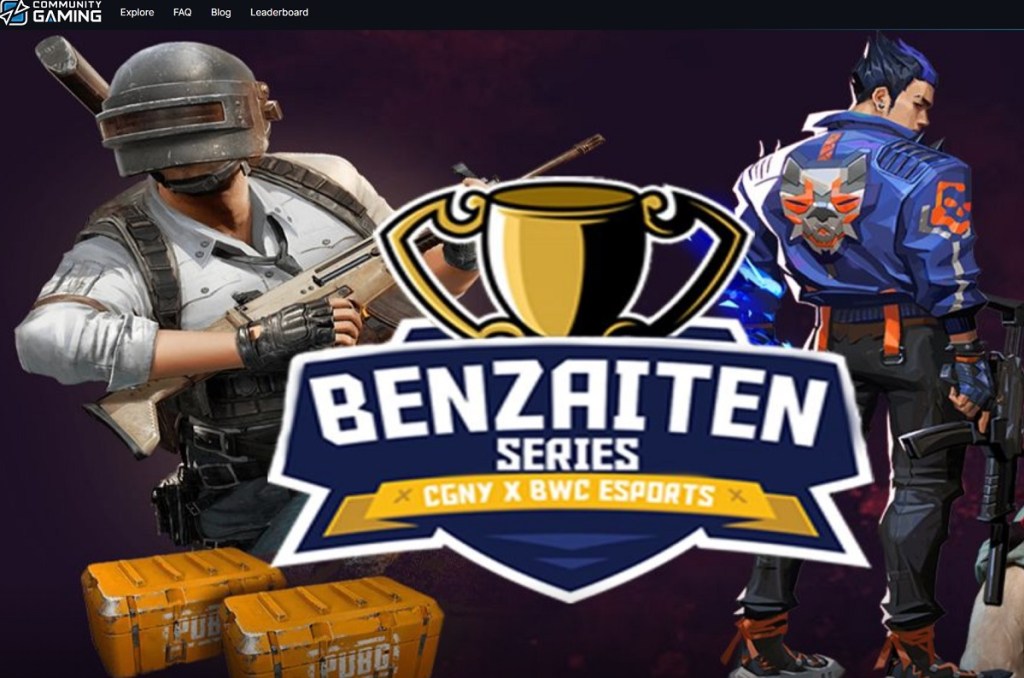 Above: A recent Community Gaming tournament.

The payments part includes setting up wallets that can hold cryptocurrency. The company makes it easy for players to do that and move money in and out of the accounts. That part makes Community Gaming more unique among esports tournament companies, Gonsalves said.

“We are a comprehensive payment solution,” he said.

Organizers can then designate the tournament format, along with rules and payout methods; the platform automatically manages the bracket for them. Likewise, participants can create their CommunityGaming.io account, connect or generate a new self-managed wallet, and join one of the active tournaments.

Currently, tournaments can be deployed on the Ethereum mainnet, Binance Smart Chain, and Polygon with fees as low as a 50th-of-a-penny. Payouts are immediately and automatically sent to the winners’ connected wallets at the conclusion of the tournament.

Often, tournament companies have to figure out player disputes about who won a match, Gonsalves said. Players can submit screenshots that show victory screens, and that helps settle those disputes. The company is trying to work with game developers to get application programming interface (API) access to determine winners.

“Once that final match is done, a button is pressed that makes the payments are ready to be sent out,” Gonsalves said. “And they’re all released from the smart contract in a way that was preconfigured in a very simple way. It’s simple, and no one can run away with the money because it is held in escrow.”

The company gets paid through sponsorship revenue from companies such as Facebook as well as some blockchain companies. Later this year, the company will turn on ticketing revenue as well. 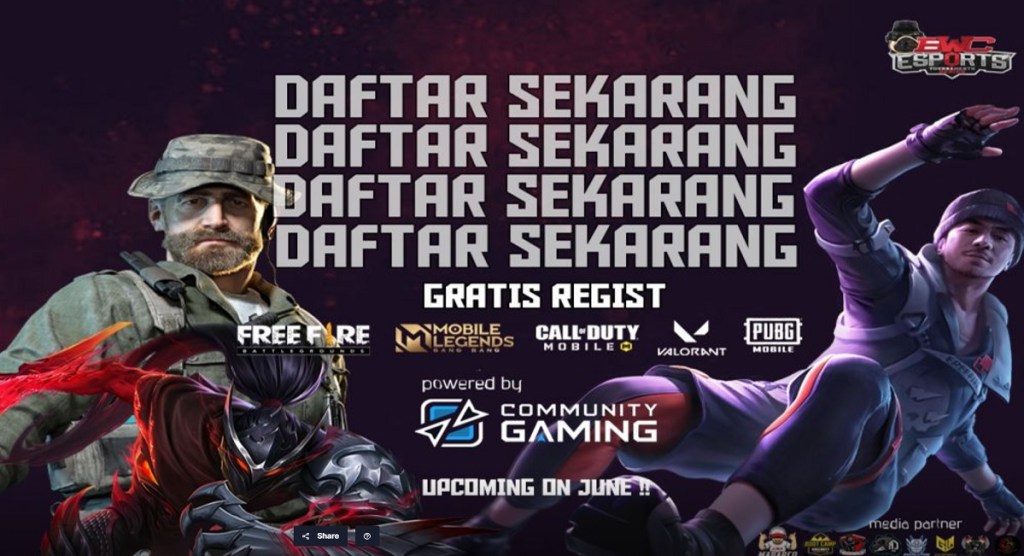 Above: Community Gaming stages online tournaments around the world.

The investment round will help Community Gaming expand its presence into Latin America and Southeast Asia as the first comprehensive blockchain-enabled payment solution in the gaming space. The company is also creating rewards to keep the community coming back.

The rewards program will start soon with stable coin payments (a cryptocurrency whose price doesn’t fluctuate much). Eventually, the company plans to have its own token and that should allow players to access bigger rewards. The investors from the crypto world should prove useful in helping Community Gaming design its own token, Gonsalves said.

“What this is really about for gamers is having the new ideation that instead of just contributing time and capital to gaming and really not receiving anything back — now you can have experiences and more potential for participation in the community value that you are building,” said Feng. “The token for Community Gaming will be a great example of that because it’s incenting behaviors that you otherwise would have been doing already, but in a way that’s very collaborative and inclusive. One awesome part of the thesis about how everybody all over the world is now excited at being able to connect with each other despite physical and geographic limits.”

“We want to provide the worst player on the platform the ability to earn money through engagement,” Gonsalves said. “You can think of it as an Amazon Prime for our site, where you can unlock different tiers and do quests. Your first week’s quest may be playing three tournaments and maybe that gets you a $2 reward. You can post your own tournament for the first time and that is a $2 reward. You can donate to your friend’s prize pool.”

The platform’s eventual rewards program will enable engaged users to increase their earning potential by completing weekly quests. The recent investment will also allow for rapid development of this rewards program as well as more complex smart contracts for league play. Gonsalves said the company has been inspired by the “play-to-earn” trend with gamers being paid to play games, as with Yield Guild Games. I call this the Leisure Economy, where one day we will all get paid to play games.

Back to physical events

It’s a very crucial part — the ethos when Community Gaming started was the social aspect coming together — where people that share this same passion as you,” Gonsalves said. “It’s a competition. There’s money on the line. And you’ll have a competition and then you’ll go and get drinks after the event.”

Through the pandemic, the company built its platform and also tapped a huge network of talent, he added. Those include people like casters who are the announcers at the tournaments.

“We are leveraging that talent as we get back out there,” he said.