Online virtual worlds have become huge, but you can actually get a much better idea of how vast they are by comparing them to the real world.

Epiphany created some beautiful pages with the comparisons, and you can see some of those stats in the images.

World of Warcraft vs. real life 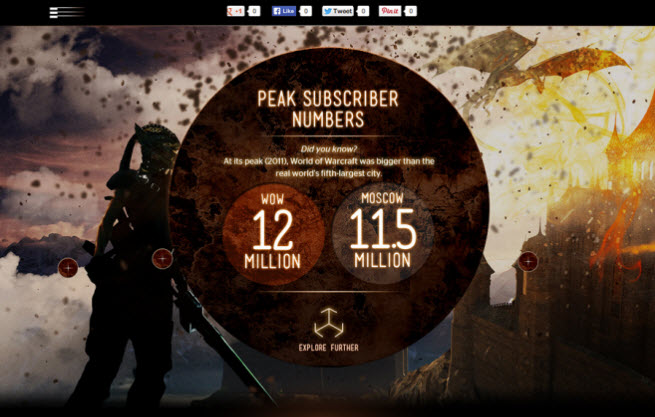 Above: World of Warcraft’s population

World of Warcraft has more than 7 million active players. The game’s subscriber numbers had a peak of 12 million, which compares to a population of 11.5 million for Moscow, the world’s fifth-largest city.

WOW uses about 1.3 petabytes of data, or about 1.3 million gigabytes. That equals 2,760 500GB hard drives, and is similar to the storage space that every photo on Facebook uses.

If you ever wondered why it’s so hard to dislodge fans from World of Warcraft and get them to play another game, it’s because its players are heavily invested in the world. 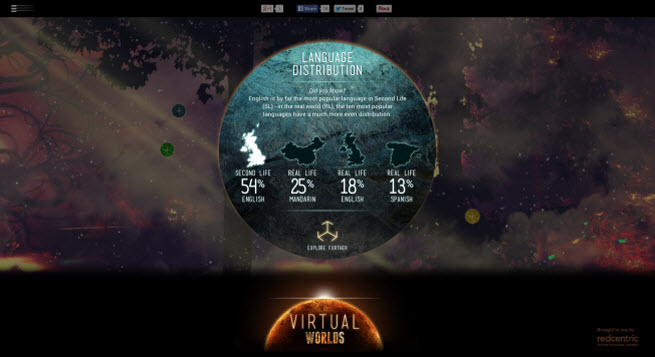 Second Life is as much an online marketplace for digital goods as it is a game. You can trade stuff and receive in-game currency and cash that out in the real world. At 800,000, Second Life’s peak population was just short of the 825,000 folks living in San Francisco.

One English pound equals 410 Linden dollars. In 2007, Second Life saw a financial collapse when developers announced it would ban real-money gambling inside the game. That caused thousands of players to rush to Ginko Financial to retrieve their currency and sell it off. The run on the bank caused a shutdown and wiped out around $750,000 in real money.

English is the most popular language in Second Life. From 2006 to 2011, Second Life saw a 4,000 percent increased in users. During that time, real-world Internet growth doubled. 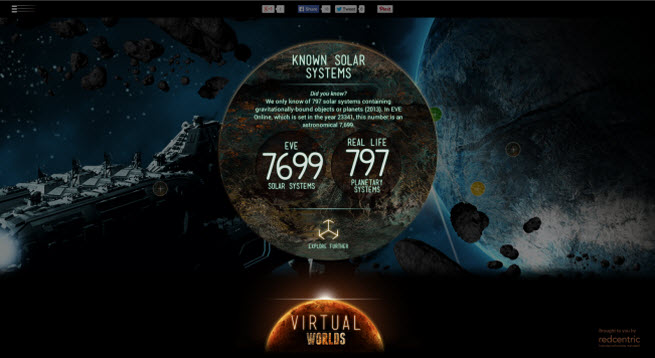 CCP’s sci-fi online game Eve Online has been around since 2003. It has a whole galaxy, complete with alien races, stargates, and 7,699 star systems, compared to about 797 known planetary systems in the Milky Way. With a population of 500,000, it is just larger than Scotland’s capital, Edinburgh, at 495,000.

The closed economy created within the game amounts to about $20 million in the real world. The profits from the game have topped $300 million, and CCP has hired professional economists to manage the game’s financial system.

About 96 percent of the players are male. By comparison, about 90 percent of astronauts have been male in the real world.