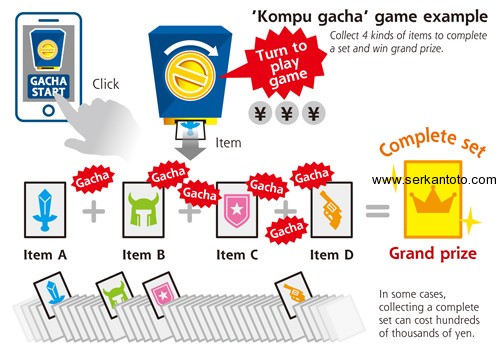 Japan’s Consumer Affairs Agency (which is similar to the United States’ Federal Trade Commission) has declared the once-ubiquitous mobile-social game mechanic of “complete gacha” to be illegal, according to a report today from Andriasang. The ban officially goes into effect on July 1.

This ruling, which declares that the mechanic violates laws against “unjustifiable premiums and misleading representation,” is something of a formality, since several prominent Japanese developers like Gree and Dena have promised to remove the feature from their products in anticipation. As we have previously reported, those companies’ stocks saw an immediate impact when the investigation began, falling over 20 percent in a matter of days.

“Complete gacha” is a potentially huge income generator for mobile-social titles. It’s a kind of virtual vending machine — a digital version of one of those old-fashioned toy machines you see in grocery stores, where you pop in a quarter and it randomly spits out a plastic bubble with a toy inside. In “complete gacha” players try to collect a whole set of prizes from these machines; only when they get the whole set can they unlock a rare item. It’s easy to see the value to developers and publishers: Players could pour money into the game indefinitely and still come no closer to getting the prize they want.

Gree and Dena’s market values are still down in the wake of today’s announcement. It’s important to note, however, that only the “complete” form of gacha (i.e. collecting sets to unlock prizes) is outlawed. Companies may still charge for randomly-generated in-game items, so these stocks still have a chance to recover once investors know how much the ban will affect profits.