Funcom’s open-world survival game Conan Exiles will leave Early Access with an improved combat system, new biomes and dungeons, and a new system called The Purge that will keep players on their toes. It’s slated for a full release on May 8 for PC, PlayStation 4, and Xbox One. At launch, each server can support up to 40 players, and characters will be able to reach a cap of level 60.

The game is based on writer Robert E. Howard’s gritty fantasy world and characters. The main goal is to survive the wilderness and slay enemies, though it does feature a storyline where players can discover why their character has gone into exile. Most of the time, though, you’ll likely be killing giant scorpions or frost giants, building your base, gathering resources, and crafting. For a more pastoral change of pace, players can also plant seeds and farm, because what says “Conan the Barbarian” more than a lovely day in the garden?

Conan Exiles has spent a year and some change in Early Access since it originally debuted in January 2017. Funcom game director Joel Bylos says that they originally wanted to cap that period at a year because it can be tempting to delay a title’s full launch and continue working at it for a lengthy period of time.

“We wanted to try and make an early access game that was high quality, that came out of launch in a fairly polished state,” said Bylos at a press preview event. “We also wanted to sort of try to limit ourselves in Early Access because we felt like it can become a trap, where if you go into Early Access, you have a cool vision for the game, and players will always want more. And if you fall into the trap of staying in Early Access forever, you just keep going and going in Early Access and you never really pull yourself out of it and pull yourself into that state where you have to polish things up and get it ready.”

Bylos showed off some of the new features Funcom has been working on, some based on player feedback while others emerged from the team’s concept of Conan Exiles’s core gameplay. It rebuilt the combat system based on lukewarm player response, and it now features combo-based melee that chains together heavy and light attacks. Players also complained about being unable to reach distant locations, so the team worked on implementing a free-form climbing system to enable them to scale walls.

Altogether, Funcom has so far pushed out 32 major updates and over 100 patches during Early Access. It’s also added over 400 items and doubled the playable areas on the map. Bylos showed off two new biomes: the swamp and the volcano. Each comes with a dungeon to explore, and the latter also has the Great Forge, which is the only place where players will be able to craft obsidian weapons. 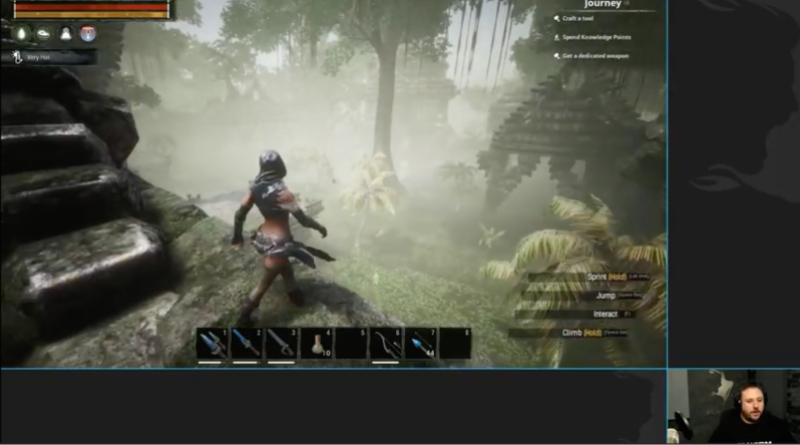 A major mechanic that Funcom teased back in March is The Purge, an in-game event where waves of enemies besiege a player’s base whether they’re logged in or not. Each player has a Purge meter — and if they’re in a clan, all the players share one — that will fill up gradually as they play. Once it fills up, their base is at risk to be struck by The Purge. What enemies you face will depend on the region you’re in. If you’re up north near the frost giants, then you can expect some of those to show up swinging. Bylos says that building your base on top of a mountain won’t save you either; undead creatures can tunnel through the bottom into your fortress and attack you anyway.

The Purge can occur on both player-vs.-player (PvP) and player-vs.-environment (PvE) servers, and whoever sets up a server can control how it behaves. For instance, they can customize whether it only happens on weekends and how long it lasts. It’s a system that can act as an equalizer between weaker clans and stronger ones on PvP servers. If you’re staking out a rival and you notice they’re about to get swarmed, you can jump into the fray and attack alongside the non-playable enemies.

“We consider this to round out the feature set of the game,” said Bylos. “Conan Exiles was always this game where we wanted people to try to build — in PvP they needed to build protectively to defend themselves against other players, but in PvE we always thought that part of the in-game loop needed to be closed off.”

Conan Exiles sold over 320,000 copies in its first week of Early Access, and around 680,000 players now own a copy, according to Steam Spy. These are great numbers for a company that struggled with previous releases like The Secret World, which it recently relaunched as a free-to-play game. That title was its third massively multiplayer online game, as it had previously developed Age of Conan and Anarchy Online.

Bylos referenced the company’s financial troubles, but he also referred to the deep experience that the company has with MMOs and how it used that to create new biomes with unique features like the Great Forge and enclaves of non-playable characters like the pirates of Buccaneer’s Bay.

“Basically, when we were building the world, we didn’t want to make it just a flat map with nothing in it. We tried to make it have interesting features for people to explore and enjoy and for people to see,” said Bylos. “And just to capture that sense of wonder that maybe we bring from our MMOs into the survival genre a little bit. Give people that feeling of new locations and new and interesting features to find.”